Institute for Research on Learning. IRL was a nonprofit research organization that looked at learning in a wide variety of settings, including schools, workplaces, and informal settings, using collaborative, multidisciplinary teams. 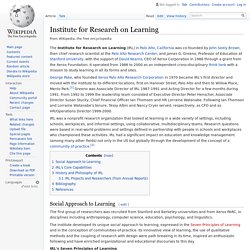 Research questions were based in real-world problems and settings defined in partnership with people in schools and workplaces who championed these activities. IRL had a significant impact on education and knowledge management (among many other fields) not only in the US but globally through the development of the concept of a community of practice.[2] Social Approach to Learning[edit] The first group of researchers was recruited from Stanford and Berkeley universities and from Xerox PARC, in disciplines including anthropology, computer science, education, psychology, and linguistics. 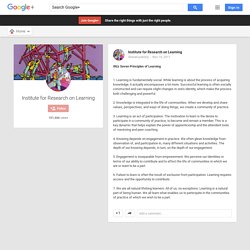 Learning is fundamentally social. While learning is about the process of acquiring knowledge, it actually encompasses a lot more. Successful learning is often socially constructed and can require slight changes in one’s identity, which make the process both challenging and powerful. 2. 3. 4. 5. 6. 7. Event - PARC Innovation Lab - PARC, a Xerox company.

Seven Principles for Good Teaching. 8 Principles for Learning. Part of the XBS change strategy was a 14-month assessment conducted by Senior Research Scientist Brigitte Jordan and a team of researchers from Xerox PARC (Palo Alto Research Center), and the Institute for Research on Learning (IRL), based in Menlo Park, California. 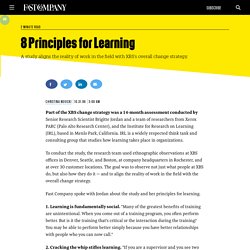 IRL is a widely respected think tank and consulting group that studies how learning takes place in organizations. To conduct the study, the research team used ethnographic observations at XBS offices in Denver, Seattle, and Boston, at company headquarters in Rochester, and at over 30 customer locations. The goal was to observe not just what people at XBS do, but also how they do it — and to align the reality of work in the field with the overall change strategy. Learning Principles-Teaching Excellence & Educational Innovation. Xerox PARC: Glimpse the future of Internet of Things (IoT) 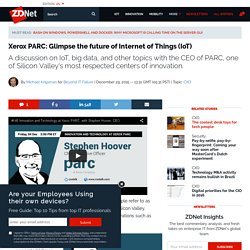 Model-view-controller software architecture PARC is also where Steve Jobs and early Apple engineers took inspiration for aspects of the Macintosh computer. Today, Xerox PARC remains an active operation with a host of commercial clients, focused in areas that include printed electronics, data and analytics, cleantech, and contextual intelligence. As part of the cxotalk.com series of talks with innovators, I spoke with the Xerox PARC's CEO, Stephen Hoover.

Xerox PARC: Collaboration at the Intersection of Art and Science. How PARC Saved Xerox. Xerox invented the core technology that made personal computing easy and fun—the mouse, the graphical user interface and the ethernet—but it was Steve Jobs who built the Macintosh and profited. 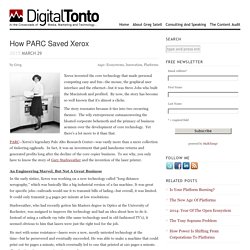 By now, the story has become so well known that it’s almost a cliche. The story resonates because it ties into two recurring themes: The wily entrepreneur outmaneuvering the bloated corporate behemoth and the primacy of business acumen over the development of core technology. Yet there’s a lot more to it than that. PARC—Xerox’s legendary Palo Alto Research Center—was vastly more than a mere collection of tinkering eggheads. In fact, it was an investment that paid handsome returns and generated profits long after the decline of the core copier business. An Engineering Marvel, But Not A Great Business. Knowledge Managment: Seven Steps to Implement. Applying the Seven Principles for Good Practice to the Online Classroom. Almost 25 years have passed since Chickering and Gamson offered seven principles for good instructional practices in undergraduate education. 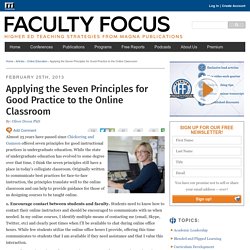 While the state of undergraduate education has evolved to some degree over that time, I think the seven principles still have a place in today’s collegiate classroom. Originally written to communicate best practices for face-to-face instruction, the principles translate well to the online classroom and can help to provide guidance for those of us designing courses to be taught online. 1. Encourage contact between students and faculty. Students need to know how to contact their online instructors and should be encouraged to communicate with us when needed. 2. 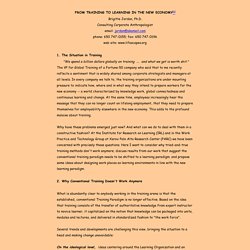 Consulting Corporate Anthropologist email: jordan@akamail.com phone: 650 747-0155; fax: 650 747-0196 web site: www.lifescapes.org "We spend a billion dollars globally on training .... and what we get is worth shit. " The VP for Global Training of a Fortune-50 company who said that to me recently reflects a sentiment that is widely shared among corporate strategists and managers at all levels. Why have these problems emerged just now? What is abundantly clear to anybody working in the training arena is that the established, conventional Training Paradigm is no longer effective. Xerox Company History and Xerox Milestones.