American Council for an Energy-Efficient Economy 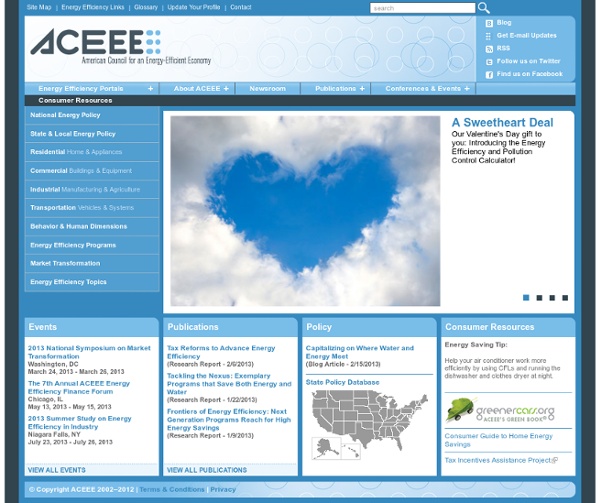 Eco Friendly Living Tips from Green House Wind turbines sit atop new houses that utilize 20% renewable energy on Nov. 25, 2009, in Croydon, England. The United Kingdom ranked first among 12 large economies for energy efficiency, according to a scorecard released Thursday by the private American Council for an Energy-Efficient Economy. The United States ranked ninth, right behind China. By Peter Macdiarmid, Getty Images Americans have long been known as the world's energy guzzlers for their supersized lifestyles. The United States placed ninth out of 12 large economies, outranked by the top-scoring United Kingdom and also by Germany, Italy, Japan, France, Australia, the European Union and China, according to the report by the American Council for an Energy-Efficiency Economy, a Washington-based research group. "We were surprised to find China outscore us significantly," says co-author Sara Hayes, noting China earned 56 out of a possible 100 points compared with 47 for the U.S. FOLLOW: Green House on Twitter Read more »

Energy Efficiency | State of Green Saving energy in buildings Buildings account for 40 per cent of the global energy consumption and nearly the same share of CO2 emissions.Consequently, reducing the energy consumption of buildings will be a key priority for any country or community striving to save money and reduce CO2 emissions. With today’s existing technologies, it is possible to reduce energy consumption in buildings by at least 50 per cent, and possibly as much as 80 per cent. These huge savings can be made quite easily with simple measures such as energy-efficient windows, insulation materials, heat regulators, ventilation systems and lighting,just to mention a few. Denmark has been a world leader in energy efficiency in buildings for decades and energy-efficient solutions are widely implemented in newly built and refurbished housing, offices and public institutions all over the country. Optimising industrial processes Join the Future.

Smart cities are crucial to kick starting the UK economy By Daniel Hunter Cities are complicated, interdependent ecosystems that are being targeted by national governments as the crucible for reanimation of the economy. With such a focus on what areas the government should prioritise to kick start the UK economy Joe Dignan, Chief Public Sector Technology Analyst at Ovum points to developers as the key catalyst in taking smart cities to the next level and driving the market. “The smart city market is at a tipping point,” says Joe Dignan. “Having been led by IT industry stalwarts such as IBM and Cisco for the last five years, it needs a fresh injection of ideas to take it to the next level. We believe the developer community will add the required impetus. “Developers are key actors in the smart city debate for three main reasons. “Although developers and the IT industry have always had common interests, the “smart” part of smart cities assumes an unprecedented level of IT technology. Join us on Bookmark

Cleantech News — Solar, Wind, EV News (#1 Source) | CleanTechnica Home Solar Panels, Commercial & Utility-Scale Solar Solutions | SunPower Energy Department Announces $10 Million for Innovative, Energy-Saving Lighting R&D Technologies As part of the Obama Administration’s effort to cut energy waste and double energy productivity by 2030, the Energy Department today announced $10 million to support research, development and manufacturing of solid-state lighting (SSL) technologies across the country. This funding will accelerate the development of high-quality light-emitting diode (LED) and organic light-emitting diode (OLED) products with the potential to reduce lighting energy use for American families and businesses by one half and enhance U.S. global competitiveness. During the past 10 years, the Department has helped accelerate SSL technology deployment, yielding an estimated energy savings of $1.8 billion in 2013. Solid-state lighting technologies, which include both LED and organic light emitting diode technologies, have the potential to save Americans $26 billion a year in energy costs by 2030. This funding opportunity is open to applications in the following areas:

Transparent Armor from NRL; Spinel Could Also Ruggedize Your Smart Phone Imagine a glass window that's tough like armor, a camera lens that doesn't get scratched in a sand storm, or a smart phone that doesn't break when dropped. Except it's not glass, it's a special ceramic called spinel {spin-ELL} that the U.S. Naval Research Laboratory (NRL) has been researching over the last 10 years. Dr. "Spinel is actually a mineral, it's magnesium aluminate," says Dr. As a more durable material, a thinner layer of spinel can give better performance than glass. NRL invented a new way of making transparent spinel, using a hot press, called sintering. The sintering method also allows NRL to make optics in a number of shapes, "conformal with the surface of an airplane or UAV wing," depending on the shape of the press. In addition to being tougher, stronger, harder, Sanghera says spinel has "unique optical properties; not only can you see through it, but it allows infrared light to go through it." Says Sanghera, "Everything we do, we're trying to push the mission. The U.S.