Track Your Monthly Expenses – Applied Digital Skills from Google. How to Go From Product Conception to Manufacturing: A Step-by-Step Guide. Every product we use in our daily lives was once just an idea. 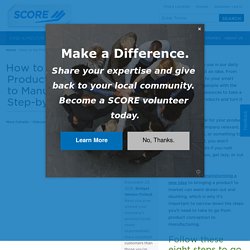 From your smartphone to your smart speakers, it took people with the confidence and resources to take a dream of these products and turn it into a reality. Whether your goal for your product is to keep your company relevant, turn a large profit, or something to stir up the market, you won’t achieve these goals if you rush through the process, get lazy, or cut corners. The evolution of brainstorming a new idea to bringing a product to market can seem drawn out and daunting, which is why it’s important to narrow down the steps you’ll need to take to go from product conception to manufacturing. Step 1: Product Concept This is where you’ll form your plan and outline of your product idea. Who is our target audience? Step 2: Research It’s crucial to your product concept that you and your team research the current demands and any similar or competing products that may be already on the market.

We Are All Related: Indigenous Knowledge Reaffirmed by Digitized Tree of Life. It looks like a Venn diagram on meth, or the jagged skyline of an exotic city in another dimension. 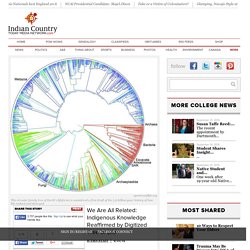 Given its content, it could contain both. The newly mapped out, comprehensive Tree of Life, compiled by a team of researchers from 11 institutions, unintentionally validates the traditional indigenous worldview that we are all related. This time, science has digitally mapped out the Tree of Life, showing 2.3 million of the tens of millions of species that are known to exist on Earth. The tree traces life back 3.5 billion years, when life is thought to have started on this planet, to shine a light on our common origins. CENSORED NEWS: Apache invite Europeans for global resistance gathering at Oak Flat March 2016.

The 6 Scary Truths About Becoming an Entrepreneur. There's a haunting, scary, messy truth about being an entrepreneur. 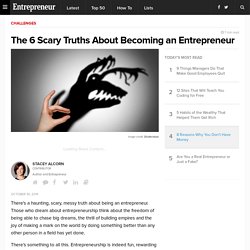 Those who dream about entrepreneurship think about the freedom of being able to chase big dreams, the thrill of building empires and the joy of making a mark on the world by doing something better than any other person in a field has yet done. There’s something to all this. Entrepreneurship is indeed fun, rewarding and freeing. But there’s a back side to entrepreneurship that nobody likes to talk about much. Being an entrepreneur can be grueling, spirit breaking and downright tough. Related: The Hard Truth of Entrepreneurship: You Will Suffer 1.

I wanted to be my own boss, just like millions of other entrepreneurs. Awesome businesses are built by listening to the people who make the business entity run. 2. Home - SirollI Institute. 2013: The Year of Social Merchandising. How brands are using the evolutionary line of social media to social marketing to social merchandising to influence their customers. 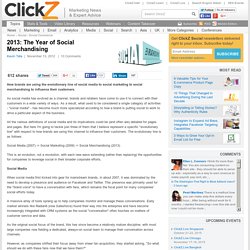 As social media has evolved as a channel, brands and retailers have come to use it to connect with their customers in a wide variety of ways. About. The Hundreds is the world’s first social merchandising company. 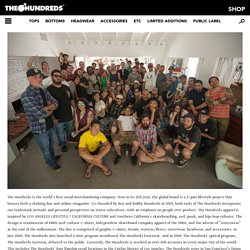 Now in its 11th year, the global brand is a 2-part lifestyle project that houses both a clothing line and online-magazine. Co-founded by Ben and Bobby Hundreds in 2003, both ends of The Hundreds incorporate our trademark attitude and personal perspective on street subculture, with an emphasis on people over product. The Hundreds apparel is inspired by LOS ANGELES LIFESTYLE / CALIFORNIA CULTURE and Southern California’s skateboarding, surf, punk, and hip-hop cultures.

The design is reminiscent of 1980s surf-culture t-shirts, independent skateboard company apparel of the 1990s, and the advent of “streetwear” at the end of the millennium. The line is comprised of graphic t-shirts, denim, wovens, fleece, outerwear, headwear, and accessories. Leonard Peltier's Message from the Penitentiary on His 71st Birthday. Critic hits Indian Market for ‘quasi-colonialism’ She'Awee by As Indigenas. Powers Of The Mind! (What we all can actually do!) Mayan Romance 'Ixcanul' Is Guatemala's Entry for Best Foreign Language Film Oscar. Children Full of Life - Important Documentary.. Very. Students' Society of McGill University Indigenizing the Academy Researcher. Urban Brawl: Pueblo Fights Plan to Build New City Near ABQ. Urban sprawl is posing many threats to Indian country when it comes to tribal land and water rights. 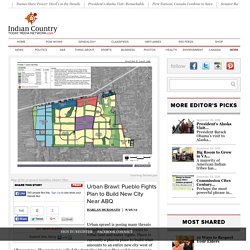 There is currently a plan in place to build what amounts to an entire new city west of Albuquerque. The project is called the Santolina Master Plan and it proposes to develop a reported 22 square miles, and 38,000 homes, atop what is known as the West Mesa. But opponents of the project argue the long-term effects could have very negative consequences to the water supply in the middle Rio Grande River watershed.