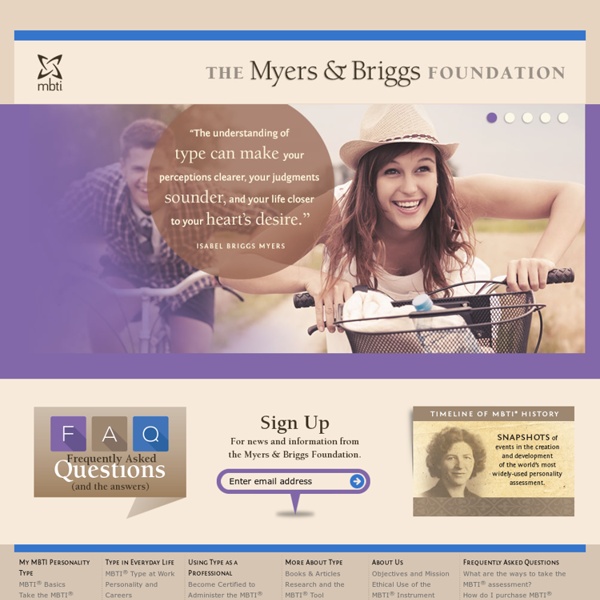 The Myers & Briggs Foundation - My MBTI® Results Learning about your personality type may begin with something very small, maybe one key insight. As your interest and knowledge grows, you can then explore your personality more deeply and how you best like to communicate and interact with others. During a basic MBTI® feedback session, you receive a profile report of your MBTI results. MBTI reports tell you your preference for each of four pairs: Extraversion or Introversion E or I Sensing or Intuition S or N Thinking or Feeling T or F Judging or Perceiving J or P The four preferences together make up your whole type. When you receive your MBTI profile, you might not agree with it. Sometimes circumstances of your life can lead you to answer the questions on the MBTI instrument so that your reported MBTI type does not reflect your true preferences. Occasionally, even after going through the steps to choose your best-fit type, you may remain uncertain about your MBTI preferences. MBTI reports tell you your preference for each of four pairs:

The Myers & Briggs Foundation - MBTI® Basics The purpose of the Myers-Briggs Type Indicator® (MBTI®) personality inventory is to make the theory of psychological types described by C. G. Jung understandable and useful in people's lives. The essence of the theory is that much seemingly random variation in the behavior is actually quite orderly and consistent, being due to basic differences in the ways individuals prefer to use their perception and judgment. "Perception involves all the ways of becoming aware of things, people, happenings, or ideas. Judgment involves all the ways of coming to conclusions about what has been perceived. In developing the Myers-Briggs Type Indicator [instrument], the aim of Isabel Briggs Myers, and her mother, Katharine Briggs, was to make the insights of type theory accessible to individuals and groups. The identification of basic preferences of each of the four dichotomies specified or implicit in Jung's theory. Favorite world: Do you prefer to focus on the outer world or on your own inner world?

Personality type This article is about the generic aspects of type theory. For the book by Jung, see Psychological Types. Clinically effective personality typologies[edit] Effective personality typologies reveal and increase knowledge and understanding of individuals, as opposed to diminishing knowledge and understanding as occurs in the case of stereotyping. Effective typologies also allow for increased ability to predict clinically relevant information about people and to develop effective treatment strategies.[2] There is an extensive literature on the topic of classifying the various types of human temperament and an equally extensive literature on personality traits or domains. These classification systems attempt to describe normal temperament and personality and emphasize the predominant features of different temperament and personality types; they are largely the province of the discipline of psychology. Types vs. traits[edit] Type theories[edit] Carl Jung[edit] Four functions of consciousness[edit]

Fédération Nationale des centres de bilans de compétences Jungian Models applied to global corporations: Kings, warriors, magicians and lover archetypes | stOttilien Recently I attended yet another team building “Engagement workshop”. It occurred to me, while I do understand that this sector in a well performing multinational corporation has rather particular objectives by its mission, why it has such multiple and interesting cultural contexts. Culture is something we all experience, but have great difficulties defining. Personal Layers The cork is tossed about at the whim of the cruel sea unless we get a handle of the nature of the true Self (of which we are only dimly aware, if at all) via the reflective process . Conscious layer The conscious portion of the organization is the public face and its visible set of structure and processes. Mission, strategy and goals: Why are we all here in this organization? Personal unconscious layer The organizational unconscious are clusters of energies, beliefs and truths that bridge between the conscious organization and the collective unconscious. Shhs don’t ask don’t tell Collective unconscious layer Like this:

16 Personality Factors The Sixteen Personality Factor Questionnaire (or 16PF),[1] is a multiple-choice personality questionnaire which was developed over several decades of research by Raymond B. Cattell, Maurice Tatsuoka and Herbert Eber. Beginning in the 1940s, Cattell used the new techniques of factor analysis (based on the correlation coefficient) in an attempt to try to discover and measure the source traits of human personality (Cattell, 1946)(Nevid, 2009).[2][3] The questionnaire measures the 16 primary traits, and the Big Five secondary traits,[4][5] which have become popularized by other authors in recent years. The test is an integral part of Cattell's comprehensive theory of individual differences. Outline of Test[edit] The 16PF Fifth Edition contains 185 multiple-choice items which are written at a fifth-grade reading level. When I find myself in a boring situation, I usually "tune out" and daydream about other things. Raymond Cattell's 16 Personality Factors[edit] Factor Analytic Strategy[edit]