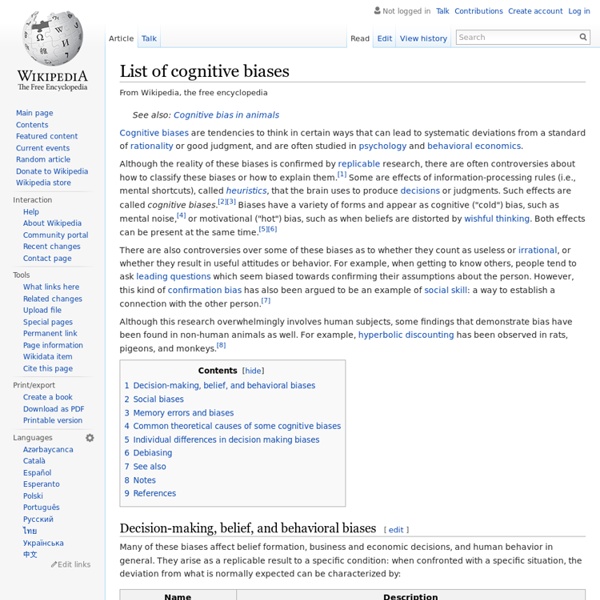 Cognitive biases are tendencies to think in certain ways that can lead to systematic deviations from a standard of rationality or good judgment, and are often studied in psychology and behavioral economics. There are also controversies over some of these biases as to whether they count as useless or irrational, or whether they result in useful attitudes or behavior. For example, when getting to know others, people tend to ask leading questions which seem biased towards confirming their assumptions about the person. However, this kind of confirmation bias has also been argued to be an example of social skill: a way to establish a connection with the other person.[7] Although this research overwhelmingly involves human subjects, some findings that demonstrate bias have been found in non-human animals as well. For example, hyperbolic discounting has been observed in rats, pigeons, and monkeys.[8] Decision-making, belief, and behavioral biases[edit] Social biases[edit] Debiasing[edit]

Cognitive dissonance In psychology, cognitive dissonance is the mental stress or discomfort experienced by an individual who holds two or more contradictory beliefs, ideas, or values at the same time, or is confronted by new information that conflicts with existing beliefs, ideas, or values.[1][2] Leon Festinger's theory of cognitive dissonance focuses on how humans strive for internal consistency. When inconsistency (dissonance) is experienced, individuals tend to become psychologically uncomfortable and they are motivated to attempt to reduce this dissonance, as well as actively avoiding situations and information which are likely to increase it.[1] Relationship between cognitions[edit]

Faulty Human Thought Humans This list is a follow up to Top 10 Common Faults in Human Thought. Thanks for everyone’s comments and feedback; you have inspired this second list! Making Mouse Memories In the movie Eternal Sunshine of the Spotless Mind, scientists erase troubling memories from Jim Carrey’s head. In real life, scientists have done the opposite. By reactivating certain nerve cells, researchers make artificial memories pop into mice’s heads. The story of the Gömböc September 2009 Play this movie to see the Gömböc wriggle. This article is also available as a podcast.

The end is always nigh in the human mind - opinion - 07 June 2011 Why are we so attracted to prophecies of doom, from religious raptures to environmental collapse? It's part of our psychology IN 1919, William Butler Yeats wrote The Second Coming, an allegory of the atmosphere in Europe after the carnage of the first world war. Things fall apart; the centre cannot hold;Mere anarchy is loosed upon the world,The blood-dimmed tide is loosed, and everywhereThe ceremony of innocence is drowned;The best lack all conviction, while the worstAre full of passionate intensity. The poem draws heavily on the mythic narrative of the apocalypse - or at least the first half of it, destruction. What usually follows is rebirth and redemption, a second chance, life born anew.

Politically Incorrect Human Nature Human nature is one of those things that everybody talks about but no one can define precisely. Every time we fall in love, fight with our spouse, get upset about the influx of immigrants into our country, or go to church, we are, in part, behaving as a human animal with our own unique evolved nature—human nature. This means two things. First, our thoughts, feelings, and behavior are produced not only by our individual experiences and environment in our own lifetime but also by what happened to our ancestors millions of years ago. Stephen Cave - Stayin' alive A group of American psychologists has discovered a simple way of turning ordinary people into fundamentalists and ideologues. Their method requires neither indoctrination nor isolation nor any form of brainwashing; indeed, it can be done anywhere and in a matter of minutes. It is just this: the researchers remind these ordinary folks that they will one day die. In one experiment, for example, the psychologists asked a group of Christian students to give their impressions of the personalities of two people.

How to Trick Your Brain for Happiness This month, we feature videos of a Greater Good presentation by Rick Hanson, the best-selling author and trailblazing psychologist. In this excerpt from his talk, Dr. Hanson explains how we can take advantage of the brain’s natural “plasticity”—it’s ability to change shape over time. gobyg There’s this great line by Ani Tenzin Palmo, an English woman who spent 12 years in a cave in Tibet: “We do not know what a thought is, yet we’re thinking them all the time.” It’s true.