Time-lapse footage of the Earth as seen from the ISS 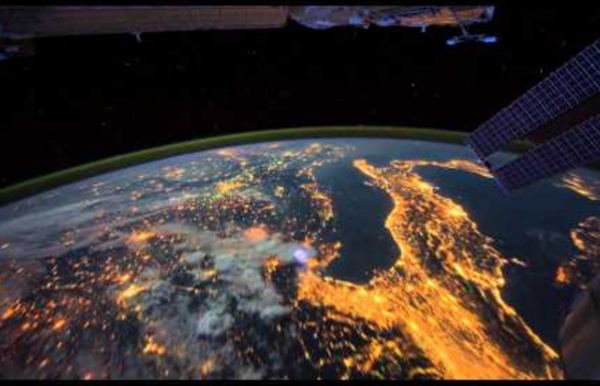 Perigee "Super Moon" On May 5-6 Perigee "Super Moon" On May 5-6 May 2, 2012: The full Moon has a reputation for trouble. It raises high tides, it makes dogs howl, it wakes you up in the middle of the night with beams of moonlight stealing through drapes. Astronomers watch black hole burp after eating a star Scientists have for the first time witnessed a black hole swallow a star and then quickly eject a flare of stellar debris moving at nearly light speed. Astrophysicists tracked the star—about the size of our sun—as it shifted from its customary path, slipped into the gravitational pull of a supermassive black hole, and was sucked in, says Sjoert van Velzen, a Hubble fellow at Johns Hopkins University. “These events are extremely rare,” says van Velzen, lead author of the study published in the journal Science. “It’s the first time we see everything from the stellar destruction followed by the launch of a conical outflow, also called a jet, and we watched it unfold over several months.” Black holes are areas of space so dense that irresistible gravitational force stops the escape of matter, gas, and even light, rendering them invisible and creating the effect of a void in the fabric of space. [Giant black hole in normal galaxy breaks the rules]

Virtual Day Trips You Can Now Take Online There is arguably no name more famous or influential in American architecture than Frank Lloyd Wright and perhaps no greater example of his work then the home, school, studio, and garden sanctuary he called Taliesin. Located in Spring Green, Wisconsin, his 800-acre state wasn’t just the architecture’s home, it served as his creative laboratory and the grounds hold examples of buildings from nearly every decade of his career. If you’d like to explore Taliesin but can’t make it to Wisconsin in person, be sure to take the 3D Virtual Reality Tour. Step inside his home, studio, school, and explore the estate grounds. This Is What Supercontinent Pangea Looks Like Mapped With Modern Borders Imagine traveling from China to Antarctica, crossing through Canada, Brazil and India – without setting foot in any water. Unfortunately, you’ve missed your chance long ago as the supercontinent of Pangea no longer exists. But thanks to the illustrative talents of Massimo Pietrobon, you can see how Pangea may have looked before the epic landmass started ripping itself apart 200 million years ago to form the continents and countries of the world today. Image Credit: Massimo Pietrobon

San Francisco Bay The Copernicus Sentinel-2 mission takes us over San Francisco Bay in the US state of California. Zoom in to view this image at its full 10 m resolution. San Francisco Bay, almost 100 km in length, is a shallow estuary surrounded by the San Francisco Bay Area – an extensive metropolitan region that is dominated by large cities such as San Francisco, Oakland and San Jose. The densely populated urban areas around the bay contrast strongly with the surrounding green forest and park areas. In the upper right of the image, the delta of the Sacramento and San Joaquin rivers is visible – with the brown, sediment-filled water flowing down into San Pablo Bay.

uk.businessinsider The universe is so vast it's almost impossible to picture what it might look like crammed into one field of view. But musician Pablo Carlos Budassi managed to do it by combining logarithmic maps of the universe from Princeton and images from NASA. He created the image below that shows the observable universe in one disc. Our sun and solar system are at the very center of the image, followed by the outer ring of our Milky Way galaxy, the Perseus arm of the Milky Way, a ring of other nearby galaxies like Andromeda, the rest of the cosmic web, cosmic microwave background radiation leftover from the big bang, and finally a ring of plasma also generated by the big bang: Pablo Carlos Budassi

Mesmerizing wave of fire sweeps through park Video Newborn calf takes its adorable first steps on an Ontario farm Born on a sunny day in May, on this beautiful farm in Millbrook, Ontario, Fiona the calf has entered the world just a few moments ago. She is taking it all in and looking around in bewilderment.