Leonard Susskind on The World As Hologram 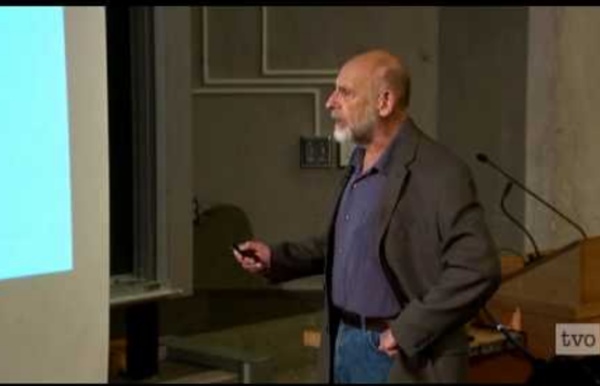 The Illusion Of Matter: Our Physical Reality Isn’t Really Physical At All Niels Bohr, a Danish Physicist who made significant contributions to understanding atomic structure and quantum theory once said: “if quantum mechanics hasn’t profoundly shocked you, you haven’t understood it yet.” Quantum physics has left scientists all over the world baffled, especially with the discovery that our physical material reality, isn’t really physical at all. “Everything we call real is made of things that cannot be regarded as real.” It seems philosophers of our ancient past were right, our senses really do deceive us. Again, our physical material reality really ISN’T physical at all. Scientific understandings change continuously throughout human history. The notion that the atom was the smallest particle in the universe fell with the discovery that the atom itself is made up of even smaller, subatomic elements. At the turn of the ninetieth century, physicists started to explore the relationship between energy and the structure of matter. What Does This Mean? Sources:

The Binary Code of the Matrix & the Power of the 'Machine' By Arno Pienaar, contributor for DreamcatcherReality.com The Machines’ power in the Binary Code is probably the best kept secret of our time. Let’s expose and dissect the reason why the computer was programmed with the one and the zero. The binary code of ones and zeros that we are familiar with from The Matrix film, holds a deeper meaning than we would have ever thought. The plot of the film is about an unreal, holographic, world wherein there are millions of slaves, performing a role in the society, such as doctors, teachers, lawyers, politicians etc. They all carry on, fueling the very system that enslaves them, yet they are unaware of the truth because their “minds” are essentially still plugged into what is called the “machine.” The Machine is what generates the matrix via Binary Code through the mind, and we see the cause and effect of As Within So Without. Even in our everyday (virtual) reality, computers are also programmed by Binary Code: 1 and 0. The Binary Code ZION also equals 64.

How the Matrix Works: In the Beginning There Was CODE The information in this article correlates well with the information in my three articles titled The Artificial Matrix and the Hidden Agenda of Cryptocurrency, How Words Can Be Used as Magic Spells and Theoretical Physicist Finds “Computer Code” in the Fabric of Space. I am aware of the information in the article below and I do agree with most of it. If you are new to this type of information, it may be hard for you to accept and comprehend it. The idea that the moon is an artificial satellite and Saturn used to be a sun has been talked about by many researchers of occult knowledge. (DreamcatcherReality.com) In the beginning there was the code. It simply points to the fact that words and numbers created the matrix! Many New Age philosophers and Kabbalists insist that a specific word said at the correct frequency may manifest matter out of thin air! If one takes this theory so literally, then it may be hard to believe, but from another viewpoint it may become clearer. Words are the Codes

Joe Rogan & NASA Physicist: We’re Living in the Matrix If you found out that we are all living in the matrix, would you take the blue pill and live a pleasant illusion or take the red pill and live in the harsh real world? In this video Joe Rogan and Nasa Physicist Tom Campbell discuss a wide range of topics that centre around the simulation theory and the theory that our universe might just be a hologram. If we as humanity are going to evolve we need to gain a deeper understanding of the universe and also our inner-selves. Kasim Khan, Team Spirit NASA Scientist Says We Are Living In A Hologram Designed By Aliens Who says scientists are boring? Nick Bostrom, professor of Philosophy at Oxford University and the Director of the Future of Humanity Institute has offered the theory that we may not actually be what we think we are. We may, in fact, be a holographic program generated by banks of supercomputers created by an alien species. As a side note, could you imagine creating a group of sentient beings and then having them figure out on their own that you created them? This is a pretty fringe concept, but not without its backers. “Right now the fastest NASA supercomputers are cranking away at about double the speed of the human brain,” the NASA scientist told Vice. “If you make a simple calculation using Moore’s Law [which roughly claims computers double in power every two years], you’ll find that these supercomputers, inside of a decade, will have the ability to compute an entire human lifetime of 80 years – including every thought ever conceived during that lifetime – in the span of a month.

DNA Hologram Iona Miller and Richard Alan Miller, O.A.K., 2003 iona_m@yahoo.com and drram@magick.net What is DNA; where did it come from; how does it function to create life, to create us? We have some of the biochemical answers, but we can look deeper into biophysics for our models. We propose that DNA functions in a way that correlates with holographic projection. DNA projects a blueprint for the organism that is translated from the electrodynamic to the molecular level. Further, research strongly suggests DNA functions as a biocomputer. Where do we come from? Panspermia alleges that life exists and is distributed uniformly through the universe in the form of amino acids, microbes, germs, and spores. This “seed of life” can travel between worlds by natural means, such as ballistic impact, meteorites, and comets. Four billion years ago there was no DNA. We still don’t know how RNA arose in the first place (Poole, 1998). For 500 million years there were only RNA-based organisms. The secret of life!

Quantum Physicists: The Universe is a Quantum Algorithm For more evidence showing that the Universe is made of quantum “computer codes”, read my article titled Theoretical Physicist Finds “Computer Code” in the Fabric of Space. ~ PL Chang By Ovidiu Racorean, author of QuantumFinancialMarkets.WordPress.com Recently, quantum gates and quantum circuits have been found when portfolios of stocks were simulated in quantum computation processes, pointing out to the existence of a bizarre quantum code beneath the stock market transactions. The quantum code of the stock market might prove to have a more profound signification if is related to the recent finding of quantum codes at the deepest levels of our reality, such as quantum mechanics of black holes and the space-time of the universe. John Preskill’s talk “Is spacetime a quantum error-correcting code?” Is Spacetime a Quantum Error-Correcting Code? Is spacetime a Quantum Error-Correcting Code? The Holographic Universe The Bad Boy of Physics, as American Scientists named him, Dr. Here is the catch.

A Hollow Earth A Hollow Earth? Modern Science says no! Modern Science will tell you that it is impossible for the earth to be "Hollow". This same Modern Science will tell you man came from a monkey and there are no such things as UFO’s. The "official" position of the Church (Holy Roman version) was that the earth was flat. The emerging sciences began to realize that this was wrong. Isa 40:22 "It is He who sits above the circle of the earth, and its inhabitants are like grasshoppers, who stretches out the heavens like a curtain, and spreads them out like a tent to dwell in." The Bible has always remained true, it is man’s own interpretation or rather the lack of proper interpretive procedures that are flawed! Is there a controversy about a hollow earth? Most Christians profess belief in a literal "Hell". The actual evidence Scientifically is no more conclusive about a Hollow Earth than it is about Evolution or UFO’s. Legends Abound: Historical Evidence? Sir Edmond Halley Admiral Byrd Red flag Warning! H.P. 1.