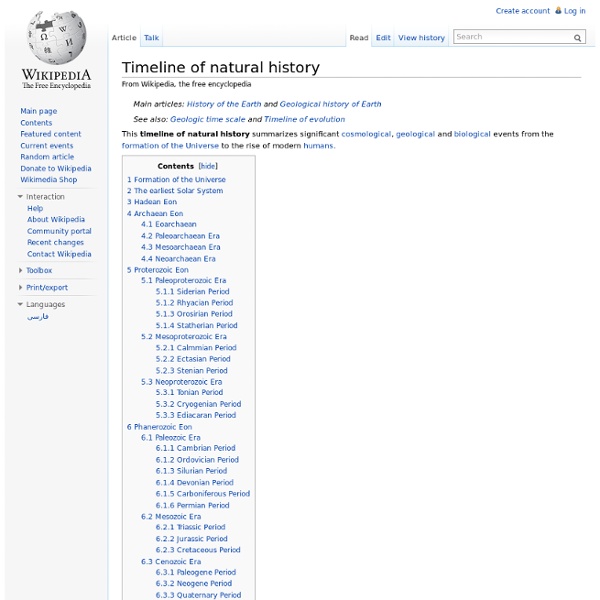 History of the Earth The history of the Earth concerns the development of the planet Earth from its formation to the present day.[1][2] Nearly all branches of natural science have contributed to the understanding of the main events of the Earth's past. The age of Earth is approximately one-third of the age of the universe. An immense amount of biological and geological change has occurred in that time span. The first life forms appeared between 3.8 and 3.5 billion years ago. The earliest evidences for life on Earth are graphite found to be biogenic in 3.7 billion-year-old metasedimentary rocks discovered in Western Greenland[3] and microbial mat fossils found in 3.48 billion-year-old sandstone discovered in Western Australia.[4][5] Photosynthetic life appeared around 2 billion years ago, enriching the atmosphere with oxygen. Geological change has been constantly occurring on our planet since the time of its formation and biological change since the first appearance of life. Geologic time scale[edit]

Daily Zen List Geological history of Earth Geologic time represented in a diagram called a geological clock, showing the relative lengths of the eons of Earth's history and noting major events The geological history of Earth follows the major events in Earth's past based on the geologic time scale, a system of chronological measurement based on the study of the planet's rock layers (stratigraphy). Earth formed about 4.54 billion years ago by accretion from the solar nebula, a disk-shaped mass of dust and gas left over from the formation of the Sun, which also created the rest of the Solar System. As the surface continually reshaped itself over hundreds of millions of years, continents formed and broke apart. The present pattern of ice ages began about 40 million years ago, then intensified at the end of the Pliocene. Precambrian[edit] The Precambrian includes approximately 90% of geologic time. Hadean Eon[edit] Archean Eon[edit] By 3.5 billion years ago, the Earth's magnetic field was established. Proterozoic Eon[edit]

Watch Free Documentaries Online | Documentary Heaven Geologic time scale The geologic time scale (GTS) is a system of chronological measurement that relates stratigraphy to time, and is used by geologists, paleontologists, and other earth scientists to describe the timing and relationships between events that have occurred throughout Earth's history. The table of geologic time spans presented here agrees with the nomenclature, dates and standard color codes set forth by the International Commission on Stratigraphy. Evidence from radiometric dating indicates that the Earth is about 4.54 billion years old. Terminology[edit] Geologists qualify these units as Early, Mid, and Late when referring to time, and Lower, Middle, and Upper when referring to the corresponding rocks. History and nomenclature of the time scale[edit] Graphical representation of Earth's history as a spiral A comparative geological timescale The principles underlying geologic (geological) time scales were later laid down by Nicholas Steno in the late 17th century. Millions of Years

Solar System Scope Microbeads Microbeads are polyethylene microspheres that are widely used in cosmetics as exfoliating agents and personal care products such as toothpaste, as well as biomedical and health science research, microscopy techniques, fluid visualization and fluid flow analysis, and process troubleshooting.[1] In the United States, microbeads are defined as less than five millimeters in its largest dimension.[2] Microbeads are commercially available in particle sizes from 10 µm to 1000 µm (1mm). Low melting temperature and fast phase transitions make this material especially suitable for creating porous structures in ceramics and other materials. Types[edit] Fluorescent polyethylene microspheres are commonly used to run blind tests on laboratory and industrial processes, in order to develop proper methods and minimize cross-contamination of equipment and materials. Environmental effects[edit] Banning production and sale in cosmetics[edit] USA[edit] The Netherlands[edit] See also[edit] References[edit]