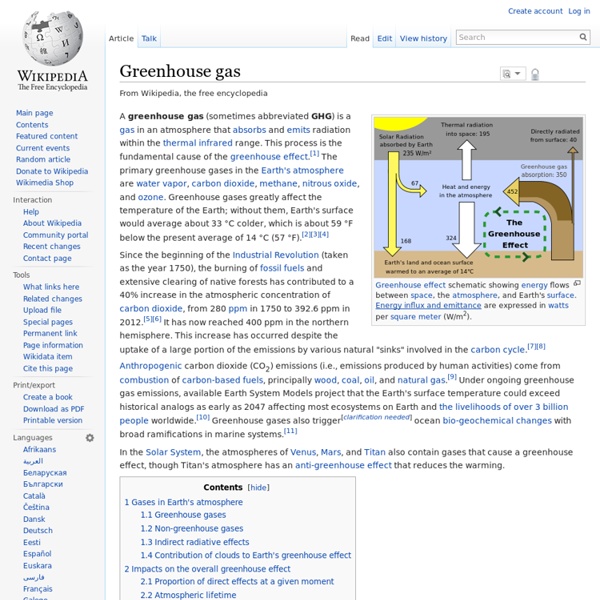 Since the beginning of the Industrial Revolution (taken as the year 1750), the burning of fossil fuels and extensive clearing of native forests has contributed to a 40% increase in the atmospheric concentration of carbon dioxide, from 280 ppm in 1750 to 392.6 ppm in 2012.[5][6] It has now reached 400 ppm in the northern hemisphere. In the Solar System, the atmospheres of Venus, Mars, and Titan also contain gases that cause a greenhouse effect, though Titan's atmosphere has an anti-greenhouse effect that reduces the warming. Gases in Earth's atmosphere[edit] Greenhouse gases[edit] Greenhouse gases are those that can absorb and emit infrared radiation,[1] but not radiation in or near the visible spectrum. Non-greenhouse gases[edit] Although contributing to many other physical and chemical reactions, the major atmospheric constituents, nitrogen (N 2), oxygen (O 2), and argon (Ar), are not greenhouse gases. Indirect radiative effects[edit] Impacts on the overall greenhouse effect[edit]

Iron Age Archaeological period The Iron Age is the final epoch of the three-age division of the prehistory and protohistory of humanity. It was preceded by the Stone Age (Paleolithic, Mesolithic, Neolithic, and Chalcolithic) and the Bronze Age. The concept has been mostly applied to Europe and the Ancient Near East, and, by analogy, also to other parts of the Old World. The duration of the Iron Age varies depending on the region under consideration. The Iron Age is taken to end, also by convention, with the beginning of the historiographical record. In South Asia (Indian sub-continent), the Iron Age is taken to begin with the ironworking Painted Gray Ware culture in the 18th century BC, and to end with the reign of Ashoka (3rd century BC). History of the concept[edit] The three-age system was introduced in the first half of the 19th century for the archaeology of Europe in particular, and by the later 19th century expanded to the archaeology of the Ancient Near East. Chronology[edit] [edit] General

Ancient Rome In its approximately 12 centuries of existence, Roman civilization shifted from a monarchy to a classical republic and then to an increasingly autocratic empire. Through conquest and assimilation, it came to dominate Southern and Western Europe, Asia Minor, North Africa, and parts of Northern and Eastern Europe. Rome was preponderant throughout the Mediterranean region and was one of the most powerful entities of the ancient world. Ancient Roman society has contributed to modern government, law, politics, engineering, art, literature, architecture, technology, warfare, religion, language and society. By the end of the Republic, Rome had conquered the lands around the Mediterranean and beyond: its domain extended from the Atlantic to Arabia and from the mouth of the Rhine to North Africa. Founding myth The Roman poet Virgil recounted this legend in his classical epic poem the Aeneid. Kingdom Main article: Roman Kingdom Republic Main article: Roman Republic Punic Wars

Slavs The Slavs are an Indo-European ethno-linguistic group living in Central Europe, Eastern Europe, Southeast Europe, North Asia and Central Asia, who speak the Indo-European Slavic languages, and share, to varying degrees, certain cultural traits and historical backgrounds. From the early 6th century they spread to inhabit most of Central and Eastern Europe and Southeast Europe.[27] Slavic groups also ventured as far as Scandinavia, constituting elements amongst the Vikings;[28][29] whilst at the other geographic extreme, Slavic mercenaries fighting for the Byzantines and Arabs settled Asia Minor and even as far as Syria.[30] Later, East Slavs (specifically, Russians and Ukrainians) colonized Siberia[31] and Central Asia.[32] Every Slavic ethnicity has emigrated to other parts of the world.[33][34] Over half of Europe's territory is inhabited by Slavic-speaking communities.[35] Ethnonym[edit] European countries where a Slavic language is the official one on the entire territory History[edit]

High Middle Ages The High Middle Ages was the period of European history around the 11th, 12th, and 13th centuries (c. 1001–1300). The High Middle Ages were preceded by the Early Middle Ages and followed by the Late Middle Ages, which by convention end around 1500. The key historical trend of the High Middle Ages was the rapidly increasing population of Europe, which brought about great social and political change from the preceding era. By 1250 the robust population increase greatly benefited the European economy, reaching levels it would not see again in some areas until the 19th century. This trend was checked in the Late Middle Ages by a series of calamities, notably the Black Death but also including numerous wars and economic stagnation. From about the year 780 onwards, Europe saw the last of the barbarian invasions[1] and became more socially and politically organized.[2] The Carolingian Renaissance led to scientific and philosophical revival of Europe. Historical events and politics[edit]

Late Middle Ages The Late Middle Ages was the period of European history generally comprising the 14th and 15th centuries (c. 1301–1500). The Late Middle Ages followed the High Middle Ages and preceded the onset of the early modern era (and, in much of Europe, the Renaissance). Around 1300, centuries of prosperity and growth in Europe came to a halt. A series of famines and plagues, such as the Great Famine of 1315–1317 and the Black Death, reduced the population to around half of what it was before the calamities.[1] Along with depopulation came social unrest and endemic warfare. France and England experienced serious peasant uprisings: the Jacquerie, the Peasants' Revolt, as well as over a century of intermittent conflict in the Hundred Years' War. Despite these crises, the 14th century was also a time of great progress within the arts and sciences. Combined with this influx of classical ideas was the invention of printing which facilitated dissemination of the printed word and democratized learning.

Early modern period In history, the early modern period of modern history follows the late Middle Ages of the post-classical era. Although the chronological limits of the period are open to debate, the timeframe spans the period after the late portion of the post-classical age (c. 1500), known as the Middle Ages, through the beginning of the Age of Revolutions (c. 1800) and is variously demarcated by historians as beginning with the Fall of Constantinople in 1453, with the Renaissance period, and with the Age of Discovery (especially with the discovery of America, but also with the discovery of the sea route to the East), and ending around the French Revolution in 1789. From a global standpoint, the most important feature of the early modern period was its globalizing character — it witnessed the exploration and colonization of the Americas and the rise of sustained contacts between previously isolated parts of the globe. The historical powers became involved in global trade. Early modern timeline[edit]

Modern history Modern history, also referred to as the modern period or the modern era, is the historiographical approach to the timeframe after the post-classical era (known as the Middle Ages).[1][2] Modern history can be further broken down into the early modern period and the late modern period after the French Revolution and the Industrial Revolution. Contemporary history is the span of historic events that are immediately relevant to the present time. The modern era began approximately in the 16th century.[3][4] The study of modern history[edit] Some events, while not without precedent, show a new way of perceiving the world. Source text[edit] The fundamental difficulty of studying modern history is the fact that a plethora of it has been documented up to the present day. Terminology and usage[edit] Pre-Modern[edit] Modern[edit] Modern era[edit] Significant developments[edit] Modern as post-medieval[edit] Early modern period[edit] Important events in the early modern period include: Asia[edit] China[edit]

Subatlantic History and stratigraphy[edit] The term subatlantic was first introduced in 1889 by Rutger Sernander[4] to differentiate it from Axel Blytt's atlantic.[5] It follows upon the previous subboreal. According to Franz Firbas (1949) and Litt et al. (2001) it consists of the pollen zones IX and X.[6][7] This corresponds in the scheme of Fritz Theodor Overbeck to the pollen zones XI and XII.[8] In climate stratigraphy the subatlantic is usually subdivided into an older subatlantic and a younger subatlantic. The older subatlantic corresponds to pollen zone IX (or XI) characterized in central and northern Europe by beech or oak-beech forests, the younger subatlantic to pollen zone X (or XII). In eastern Germany Dietrich Franke subdivides the subatlantic into four stages (from young to old):[9] Ages[edit] The beginning of the subatlantic is usually defined as 2,400 calendar years BP or 450 BC. Climatic evolution[edit] Reconstructed temperatures of the earth during the last 2,000 years. Atmosphere[edit]