There’s Growing Evidence That the Universe Is Connected by Giant Structures. Ancient Earth globe. This visualization is created and maintained by Ian Webster. 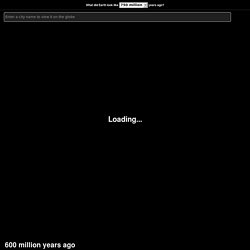 See more of my work at ianww.com or email me at ian@dinosaurpictures.org. Click here to subscribe to occassional email updates when we add something interesting to this visualization such as new dinosaur or plate tectonic data. Plate tectonic and paleogeographic maps by C.R. Earth's Mysterious Second Magnetic Field Revealed in Stunning New Swarm Images. Ozone Layer Isn't Healing After All—and Depletion May Be More Harmful Than Ever. The Earth’s ozone shield continues to thin across much of the planet, scientists have discovered. 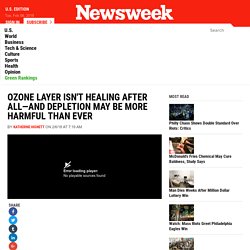 With the decline sited over some of the most populous places on Earth, this decrease could be even more damaging than the Antarctic hole. While the famous hole in the ozone layer may be shrinking, its recovery has been offset by this unexpected decrease in other parts of the atmosphere. Shield against deadly UV radiation. The Phases of the Super Blue Blood Moon of 2018 Explained. 1.7-Billion-Year-Old Chunk of North America Found Sticking to Australia. Geologists matching rocks from opposite sides of the globe have found that part of Australia was once attached to North America 1.7 billion years ago. 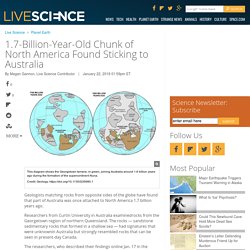 Researchers from Curtin University in Australia examinedrocks from the Georgetown region of northern Queensland. The rocks — sandstone sedimentary rocks that formed in a shallow sea — had signatures that were unknownin Australia but strongly resembled rocks that can be seen in present-day Canada. The researchers, who described their findings online Jan. 17 in the journal Geology, concluded that the Georgetown area broke away from North America 1.7 billion years ago. Then, 100 million years later, this landmass collided with what is now northern Australia, at the Mount Isa region. 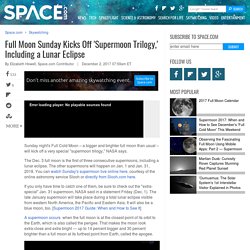 The Dec. 3 full moon is the first of three consecutive supermoons, including a lunar eclipse. The other supermoons will happen on Jan. 1 and Jan. 31, 2018. You can watch Sunday's supermoon live online here, courtesy of the online astronomy service Slooh or directly from Slooh.com here. If you only have time to catch one of them, be sure to check out the "extra-special" Jan. 31 supermoon, NASA said in a statement Friday (Dec. 1). The late January supermoon will take place during a total lunar eclipse visible from western North America, the Pacific and Eastern Asia. Scott Kelly Spent a Year in Space—Find Out How Hard It Was.

By Simon Worrall What does it feel like to blast off from Earth in a rocket, knowing that you will not see your family, feel the wind on your face, or taste fresh-cooked food for a whole year? 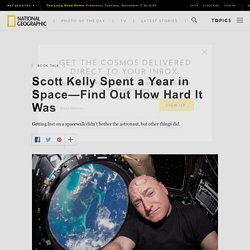 Scott Kelly, the first NASA astronaut to spend close to a year on the International Space Station (ISS), describes how strange it was in Endurance, his new book. Orionid meteor shower 2017: When is it & how to watch it. Mysterious signal from deep space goes hyperactive - CNET. The unexplained signals from the other side of the universe known as fast radio bursts are a rarely observed phenomenon and only one of them has been picked up more than once. 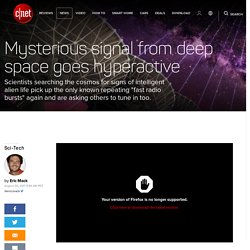 Now scientists engaged in the search for extraterrestrial intelligence say that lone repeating fast radio burst (FRB) is being heard twittering away. Natural Brexit: Britain&apos;s original separation from Europe left scars on English Channel. As it turns out, Brexit was not the first time Britain has separated from the European mainland. 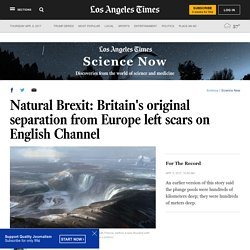 Scientists say that England and France were once connected by a ridge of land, until powerful waterfalls from an overfull lake demolished their connection. Massive ‘anomaly’ lurks beneath ice in Antarctica. SCIENTISTS believe a massive object which could change our understanding of history is hidden beneath the Antarctic ice. 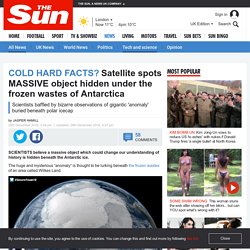 The huge and mysterious “anomaly” is thought to be lurking beneath the frozen wastes of an area called Wilkes Land. It stretches for a distance of 151 miles across and has a maximum depth of about 848 metres. Some researchers believe it is the remains of a truly massive asteroid which was more than twice the size of the Chicxulub space rock which wiped out the dinosaurs. If this explanation is true, it could mean this killer asteroid caused the Permian–Triassic extinction event which killed 96 percent of Earth’s sea creatures and up to 70 percent of the vertebrate organisms living on land. Every Country in the World (Part 1) Google Unveils a 3-Decade Time-Lapse of the Earth. It doesn’t pay to take your eyes off the Earth for a second. 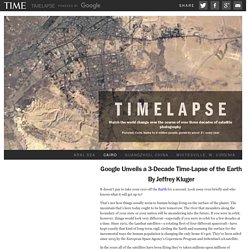 Look away even briefly and who knows what it will get up to? That’s not how things usually seem to human beings living on the surface of the planet. The Moon Hasn't Been This Close in Almost 69 Years. On Monday (Nov. 14) at 6:15 a.m. 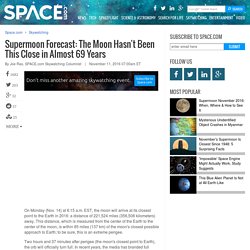 EST, the moon will arrive at its closest point to the Earth in 2016: a distance of 221,524 miles (356,508 kilometers) away. This distance, which is measured from the center of the Earth to the center of the moon, is within 85 miles (137 km) of the moon's closest possible approach to Earth; to be sure, this is an extreme perigee. Two hours and 37 minutes after perigee (the moon's closest point to Earth), the orb will officially turn full. In recent years, the media has branded full moons that coincide with perigee as "supermoons," and this month's full moon will likely get a lot of extra attention since it will be the closest since Jan. 26, 1948. [Supermoon November 2016: When, Where & How to See It] The Slooh Community Observatory will offer a live broadcast for November's full moon on Nov. 13 at 8 p.m.

A global map of wind, weather, and ocean conditions. Imgur user shows map of every river basin in the US. A stunning new map shows the complex network of rivers and streams in the contiguous United States. Created by Imgur user Fejetlenfej, a geographer and GIS analyst with a ‘lifelong passion for beautiful maps,’ it highlights the massive expanse of river basins across the country – in particular, those which feed the Mississippi River. The map visualizes Strahler Stream Order Classification, the creator explains, with higher stream orders indicated as thicker lines.

Scroll down for video. On Flipboard. Voyagers. How North America got its shape - Peter J. Haproff. Want to learn more about North America’s geologic history and plate tectonics? Talk to a geologist! Visit our UCLA Tectonics and Structural Geology group site and check out ongoing research and published papers on the Himalayas, Tibetan Plateau, and even Mars. You can find excellent figures and explanations of North American plate tectonics from the U.S.

Geological Survey here. You can also see paleogeographic reconstructions of North America through geologic time at Dr. Want to learn more about the San Andreas fault and other active faults right in our backyard? North America's range of national parks offers many opportunities for visitors to see these geographical and geological formations in person. NASA just saw something come out of a black hole for the first time ever. Wed, Nov 04, 2015 12:03pm. Scientists have created a single chart that illustrates the circle of life with every known species on Earth. In 1582, Richard Mulcaster, headmaster of the Merchant Tailors’ school, wrote that “our English tung is of small reatch, it stretcheth no further than this Iland of ours.” Forbes Welcome. Businessinsider. This Breathtaking Photo Shows Two Galaxies Merging Together.

Uk.businessinsider. We Finally Know What’s Inside These Mysterious Black Hole Clouds. This Is What Supercontinent Pangea Looks Like Mapped With Modern Borders. Imagine traveling from China to Antarctica, crossing through Canada, Brazil and India – without setting foot in any water. Astronomers watch black hole burp after eating a star. Scientists have for the first time witnessed a black hole swallow a star and then quickly eject a flare of stellar debris moving at nearly light speed.

Solarsystemscope.com. 100,000 Stars. Time-lapse footage of the Earth as seen from the ISS. Earth & Space.