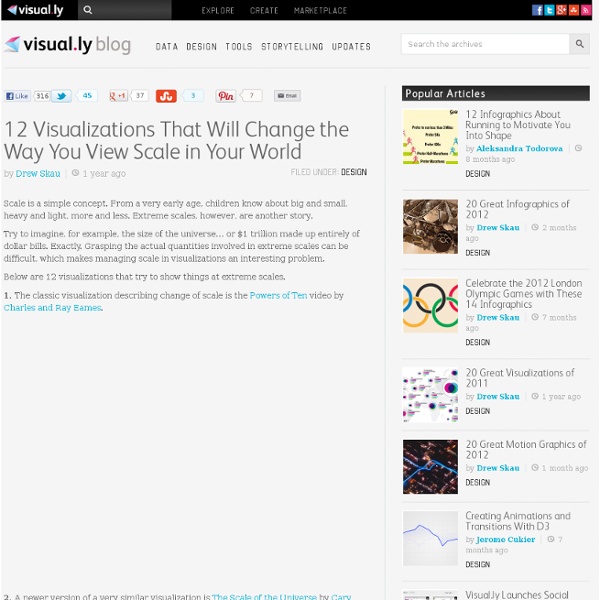 Scale is a simple concept. From a very early age, children know about big and small, heavy and light, more and less. Extreme scales, however, are another story. Try to imagine, for example, the size of the universe… or $1 trillion made up entirely of dollar bills. Below are 12 visualizations that try to show things at extreme scales. 1. 2. 3. 4. 5. 6. 7. 8. 9. Infographic originally published on Mashable.com. 10. xkcd’s creator, Randall Munroe seems to enjoy visualizations of scale. 11. 12. Humans all fit within a small range of sizes, weights, and lifespans, and the quantities we deal with typically fit in small ranges as well. Drew Skau is a PhD Computer Science Visualization student at UNCC, with an undergraduate degree in Architecture.

What topics science lovers link to the most Hilary Mason, chief scientist at bitly, examined links to 600 science pages and the pages that those people visited next: The results revealed which subjects were strongly and weakly associated. Chemistry was linked to almost no other science. Biology was linked to almost all of them. Health was tied more to business than to food. The interactive lets you poke around the data, looking at connections sorted from weakest (fewer links) to strongest (more links), and nodes are organized such that topics with more links between each other are closer together. Natural next step: let me click on the nodes. [Scientific American via @hmason]

7 Must-Read Books on Time by Maria Popova What the second law of thermodynamics has to do with Saint Augustine, landscape art, and graphic novels. Time is the most fundamental common denominator between our existence and that of everything else, it’s the yardstick by which we measure nearly every aspect of our lives, directly or indirectly, yet its nature remains one of the greatest mysteries of science. It comes as no surprise to start with A Brief History of Time — legendary theoretical physicist and cosmologist Stephen Hawking’s 1988 masterpiece, which is commonly considered the most important book in popular science ever published and one of our 10 essential primers on (almost) everything. With a foreword by none other than Carl Sagan, the book remains a fundamental sensemaking mechanism for understanding the cosmos, our place in it, how we got there, and where we might be going. Perhaps most powerful of all is the human hope and scientific vision of Hawking’s ending: Full review here. Full review here.

GoldenMap - Mindmaping de World » Giddy With Excitement! Grades 1 and 2 at Ancaster Meadow School Feb1 Ever since I started focusing on math this year, I’ve started to love math in a way that I never did before. I think that I’m having as much fun learning math as my students are, and I’m so glad that we can learn together. This week though – even though it’s only Tuesday – has been incredible! This is our school’s Math Week, so today, I set-up some different math centres that had students writing and talking about math. You can almost hear me chuckling in the background because I’m just so excited by what this student figured out. The best thing though is that this video was just the start of so many amazing conversations about math. Just listening to what the children discuss show me what the students know and what they still need to learn (I think it’s time to introduce the parallelogram). So while it’s late and I should be going to bed, I just can’t sleep because I’m giddy with math excitement … and this makes me beyond happy. :) Have you had these special math moments before?

Action Science Explorer (Formerly iOpener Workbench) Latest News January 2012. Our paper on Action Science Explorer was accepted by JASIST, the Journal of the American Society for Information Science and Technology. See the Publications section below for more details. December 2011. July 2010. Description The goal of the iOpener project is to generate readily-consumable surveys of different scientific domains and topics, targeted to different audiences and levels. Action Science Explorer is partially an integration of two powerful existing tools the SocialAction network analysis tool and the JabRef reference manager. JabRef supplies all the features one would expect from a reference manager, including searching using simple regular expressions, automatic and manual grouping of papers, DOI and URL links, PDF full text with annotations, abstracts, user generated reviews and text annotations, and many ways of exporting. These tools are linked together to form multiple coordinated views of the data. Data & Summarization Video Demonstration

Top Tech Trends of 2011 (infographic) Stay Connected with Us! Follow TechnoBuffalo So what can we learn from 2011? Well for one, according to this infographic, it seems people en masse absolutely do not like being hardwired. In other words, all we want is to do more and enjoy more, absolutely everywhere we are. For the full list of 2011′s tech trends, hit up the infographic below. [via Alltop, Column Five, source G+] Click to enlarge

NewsAlert: NASA Discovers a Water World --A 'New Species' "Unlike Any Planet We Know Of" "GJ1214b is like no planet we know of. A huge fraction of its mass is made up of water." Zachory Berta, astronomer with the Harvard-Smithsonian Center for Astrophysics Our solar system contains three types of planets: rocky, terrestrial worlds (Mercury, Venus, Earth, and Mars), gas giants (Jupiter and Saturn), and ice giants (Uranus and Neptune). Observations by NASA's Hubble Space Telescope have added a new type of planet to the mix. GJ1214b was discovered in 2009 by the ground-based MEarth (pronounced "mirth") Project, which is led by CfA's David Charbonneau. In 2010, CfA scientist Jacob Bean and colleagues reported that they had measured the atmosphere of GJ1214b, finding it likely that the atmosphere was composed mainly of water. "We're using Hubble to measure the infrared color of sunset on this world," explained Berta.Hazes are more transparent to infrared light than to visible light, so the Hubble observations help tell the difference between a steamy and a hazy atmosphere.

jardindeblogs - Aurora Order of Operation Songs written by: Amanda Smith • edited by: Trent Lorcher • updated: 2/14/2012 Do you remember your favorite song from 10 years ago? Do you remember it word for word? That is the beauty of using music as a tool in learning. By putting the steps of the order of operations to song, your students will have a blast while increasing their memorization of the concept. Order of Operations SongsThe order of operations is a very important concept in elementary math education. Teaching Tools for the Order of Operations Need help finding creative ways to engage students in learning the Order or Operations?

instaGrok | A new way to learn prima guerra mondiale.html <table width=90% cellpadding=10><tr><td bgcolor=ff4444><span><h1>Warning:</h1><b>JavaScript is turned OFF. None of the links on this page will work until it is reactivated. <p><a href=" If you need help turning JavaScript On, click here.