Timeline of evolutionary history of life 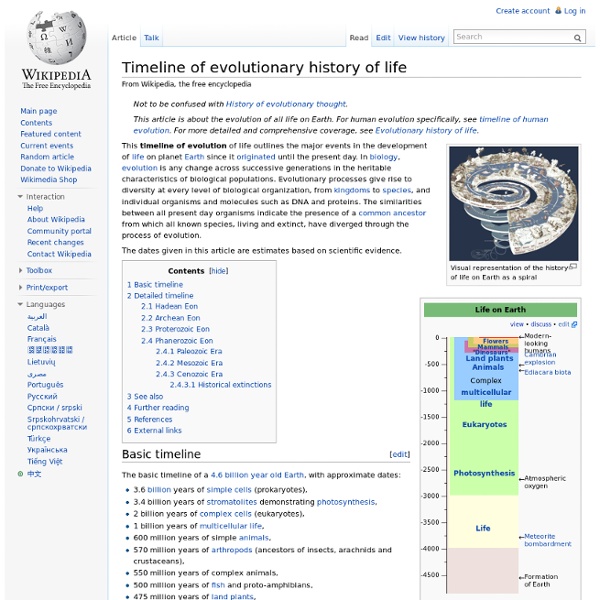 Neanderthal Bones Suggest Species Mostly Right-Handed, Had Spoken Language By: Megan Gannon, News Editor Published: 08/24/2012 01:30 PM EDT on LiveScience Right-handed humans vastly outnumber lefties by a ratio of about nine to one, and the same may have been true for Neanderthals. Researchers say right-hand dominance in the extinct species suggests that, like humans, they also had the capacity for language. A new analysis of the skeleton of a 20-something Neanderthal man confirms that he was a righty like most of his European caveman cousins whose remains have been studied by scientists (16 of 18 specimens). Dubbed "Regourdou," the skeleton was discovered in 1957 in France, not far from the famous network of caves at Lascaux. Scientists previously had argued that Regourdou was right-handed based on the muscularity of his right arm versus his left arm. "We've been studying scratch marks on [Neanderthal] teeth, but in all cases they were isolated teeth, or teeth in mandibles not directly associated with skeletal material," Frayer said."

Space sugar may shed light on how life evolved on Earth Using the latest-generation Atacama Large Millimeter Array (ALMA), which is an advanced system of 64 radio-telescope antennas in northern Chile, scientists at the European Southern Observatory have discovered a simple form of sugar orbiting a small binary star. Known as 16293-2422, that star is only 400 light-years away, and has about the same mass as the Sun. The finding could shed light on how the building blocks of life can originate spontaneously in deep space, even without a planet to support them. View all The molecule found was glycolaldehyde (C2H4O2), not dissimilar to the table sugar (C12H22O11) we're familiar with, and one of the building blocks of DNA and RNA. Molecules in deep space rotate end-for-end. Most chemical reactions on Earth occur in liquid water, but in interstellar space the complex molecules appear to form on the surface of tiny dust particles. "A big question is: how complex can these molecules become before they are incorporated into new planets?"

Ancient Tooth Found In Slovenia Suggests Beeswax Was Used To Treat Toothache {*style:<ul>*}{*style:<li>*}{*style:<h3>*}Napoleonic Soldiers Buried{*style:</h3>*}{*style:<br>*}A Catholic priest blesses a grave during a burial ceremony for the remains of 110 Napoleonic soldiers who died in a major battle against the Russian army, near the of Studenka, about 100 kilometers (63 miles) east of Minsk, Belarus, Friday, Nov. 2, 2012. (AP Photo/Sergei Grits){*style:</li>*}{*style:<li>*}{*style:<h3>*}Mayan Tomb Discovered{*style:</h3>*}{*style:<br>*}This photo taken on May 25, 2012, released on Thursday, Oct. 25, 2012 by Tak'alik Ab'aj Archaeological Project shows a jade piece in the tomb of a very early Mayan ruler at Tak'alik Ab'aj archaeological site in Retalhuleu, south of Guatemala City.

New DNA Analysis Shows Ancient Humans Interbred with Denisovans Tens of thousands of years ago modern humans crossed paths with the group of hominins known as the Neandertals. Researchers now think they also met another, less-known group called the Denisovans. The only trace that we have found, however, is a single finger bone and two teeth, but those fragments have been enough to cradle wisps of Denisovan DNA across thousands of years inside a Siberian cave. Now a team of scientists has been able to reconstruct their entire genome from these meager fragments. The analysis adds new twists to prevailing notions about archaic human history. "Denisova is a big surprise," says John Hawks, a biological anthropologist at the University of Wisconsin–Madison who was not involved in the new research. Now Pääbo and his colleagues have devised a new method of genetic analysis that allowed them to reconstruct the entire Denisovan genome with nearly all of the genome sequenced approximately 30 times over akin to what we can do for modern humans.

Ancient piece of fabric from surprising source This piece of fabric is 2,800 years old, found in the Lusehøj barrow. (Photo: The National museum of Denmark) In 1861, archaeology enthusiast King Frederick VII led an excavation of the mighty Lusehøj barrow on Southwest Funen in Denmark. The excavation turned up dazzling bronze objects which enriched the king’s collection, but he also secured a fragment of a few centimetres of woven cloth. The cloth had been wrapped around the cremated remains of a corpse and placed in a bronze urn. The burial mound was most certainly built for a wealthy and powerful person. But what about the bits of fabric? Recent analyses gave surprising information about fabric production in Bronze Age Europe. Made of nettles Items excavated from the burial mound in Lusehøj: the bronze urn and items made of bronze and amber. Until recently it was assumed that the piece of cloth from Lusehøj was linen, made of cultivated flax. The researchers report their surprising discovery in the journal Scientific Reports.

Caveman Couture: Neandertals Rocked Dark Feathers Artist's conception of a Neandertal's feather decorations. Image: Antonio Monclova GIBRALTAR—Jordi Rosell removes a thumbnail-size piece of reddish-tan bone from a sealed plastic bag, carefully places it under the stereomicroscope and invites me to have a look. Peering through the eyepieces I see two parallel lines etched in the specimen’s weathered surface. Tens of thousands of years ago, in one of the seaside caves located here on the southernmost tip of the Iberian Peninsula, a Neandertal nicked the bone—a bit of shoulder blade from a bird known as the red kite–with a sharp stone tool in those two spots. Experts agree that Neandertals hunted large game, controlled fire, wore animal furs and made stone tools. Cutmarks made by a Neandertal on a wing bone from a griffon vulture. Over the past couple decades hints that Neandertals were savvier than previously thought have surfaced, however. The Neandertals seem unlikely to have hunted these birds for food.

Turning Back the Timeline: Human Growth Boom Started Before Agriculture Picture: Margaret A. McIntyre (PD) Researchers who dare to propose that the development of human civilization started well before the established timeline of approximately 4,000 BC are used to the scorn of mainstream academics. However, as historical anomalies too big to ignore or cover up continue to surface some academics are learning that they don’t like the taste of their own medicine. Mainstream academia teaches that proper civilizations and its associated sciences, like architecture, began with the birth of agriculture. The so-called “Neolithic Revolution” – one part of which was the birth of agriculture – began sometime between 10 and 5,000 years ago. Could what we deem “civilization” started thousands of years earlier than we are taught to believe? Ideally, science should be open-minded to possibility, welcoming challenges to theories as opportunities to add to the corpus of human knowledge. Interested in alternative archaeology? Underground! The Egypt Code, Robert Bauval

Prehistoric human populations prospered before the agricultural boom, research suggests Researchers from China's Fudan University have found major prehistoric human population expansions may have begun before the Neolithic period, which probably led to the introduction of agriculture. Major prehistoric human population expansions in three continents may have begun before the Neolithic period -- around 15-11,000 years ago in Africa, from around 13,000 years ago in Europe and around 12-8,000 years ago in the Americas. The findings are published in Scientific Reports. The development of agriculture facilitated extensive human population growths and activities, but whether these major expansions began before or after the Neolithic era, a period during which humans started to grow crops and domesticate animals, remains controversial. To compare global patterns of population growth, Li Jin and colleagues analyzed over 900 mitochrondrial genomes generated by the 1000 Genomes Project, representing 11 populations in Africa, Europe and the Americas.

Mmmm, Brains: Everything You Wanted to Know About Cannibalism But Were Afraid to Ask It's the time of year when seeing flesh-eating zombies on the streets is actually kind of normal. So let's talk about cannibalism. You know you're wondering. When did all this craziness start? Neanderthal Model from the Chicago Field Museum, 1920. Paleoanthropologic evidence suggests that Neanderthals were butchering each other as far back as 100,000 years ago. Evidence also suggests* that humans in Europe, North and South America, India, New Zealand, Australia, the Solomon Islands, New Guinea and Sumatra practiced cannibalism at various times beginning just prior to the Upper Paleolithic period. Why would you want to eat another person? In the days of pre-modern medicine, cannibalism was explained by a proposed black humour (the body fluids that Hippocrates believed caused moods, emotions and behaviors) that filled the ventricle and caused hunger for human flesh. Cannibals carrying their master, World's Columbia Exhibition, Chicago, 1893. Do Other Animals Do It? Getty Images Is That It?

How scientists recreated Neanderthal man 23 October 2012Last updated at 02:47 ET A team of international experts has been rebuilding our most iconic ancient ancestors from the bones up - starting with a Neanderthal A team of scientists has created what it believes is the first really accurate reconstruction of Neanderthal man, from a skeleton that was discovered in France over a century ago. In 1909, excavations at La Ferrassie cave in the Dordogne unearthed the remains of a group of Neanderthals. These remains have helped scientists create a detailed reconstruction of our closest prehistoric relative for a new BBC series, Prehistoric Autopsy. La Ferrassie 1 is one of the most important discoveries made in the field of Neanderthal research. His skull is the largest and most complete ever found. We now know that Neanderthals were stocky with strong arms and hands, and that they had large skulls - longer and lower than ours - with sloping foreheads and no chin. Following clues The next stage was to add the Neanderthal's muscles.

DNA reveals Neanderthal extinction clues 27 February 2012Last updated at 18:14 By Paul Rincon Science editor, BBC News website Neanderthals were close evolutionary cousins of our own species - Homo sapiens Neanderthals were already on the verge of extinction in Europe by the time modern humans arrived on the scene, a study suggests. DNA analysis suggests most Neanderthals in western Europe died out as early as 50,000 years ago - thousands of years before our own species appeared. A small group of Neanderthals then recolonised parts of Europe, surviving for 10,000 years before vanishing. The work is published in the journal Molecular Biology and Evolution. An international team of researchers studied the variation, or diversity, in mitochondrial DNA extracted from the bones of 13 Neanderthals. This type of genetic information is passed down on the maternal line; because cells contain multiple copies of the mitochondrial genome, this DNA is easier to extract from ancient remains than the DNA found in the nuclei of cells. “Start Quote

Did climate kill off the Neanderthals? Climate change, we're told, poses the single gravest threat to the survival of our species. And if the experience of our ancient relatives the Neanderthals is anything to go by, we should take note of the warnings. Recent research has suggested that climate change may have been the killer blow that finished off our closest evolutionary cousins. For about 400,000 years, the Neanderthals dominated Europe, hunting big game such as mammoth and bison. These hardy cavemen and cavewomen survived one Ice Age after another. By 35,000 years ago, the Neanderthals had vanished from most parts of Europe. They had found evidence that a small population of survivors clung on in Iberia - modern Spain, Portugal and Gibraltar - until much more recently. This evidence came from radiocarbon dates obtained from Neanderthal campfires in Gorham's Cave, a natural shelter cut into the Rock of Gibraltar. 'A good place to stay' "There were various different types of animals. Before and after Out of sight? Complex picture