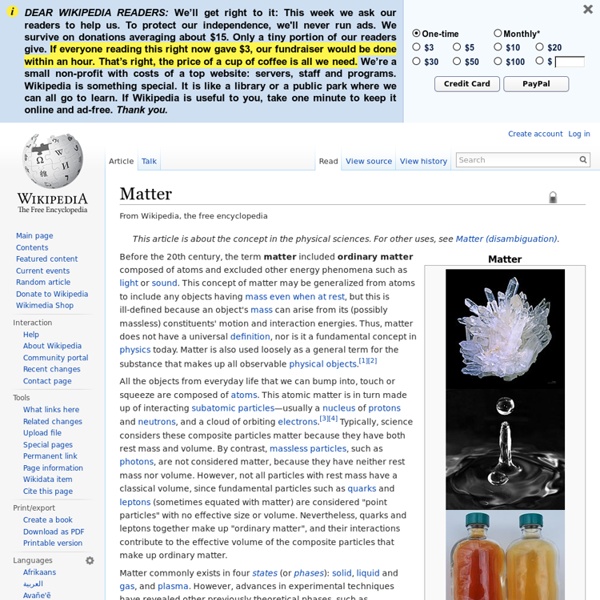 Before the 20th century, the term matter included ordinary matter composed of atoms and excluded other energy phenomena such as light or sound. This concept of matter may be generalized from atoms to include any objects having mass even when at rest, but this is ill-defined because an object's mass can arise from its (possibly massless) constituents' motion and interaction energies. Thus, matter does not have a universal definition, nor is it a fundamental concept in physics today. Matter is also used loosely as a general term for the substance that makes up all observable physical objects.[1][2] All the objects from everyday life that we can bump into, touch or squeeze are composed of atoms. This atomic matter is in turn made up of interacting subatomic particles—usually a nucleus of protons and neutrons, and a cloud of orbiting electrons.[3][4] Typically, science considers these composite particles matter because they have both rest mass and volume. Definition Common definition Quarks Related:  Chemic.ally Assets

Energy All of the many forms of energy are convertible to other kinds of energy, and obey the conservation of energy. Common energy forms include the kinetic energy of a moving object, the radiant energy carried by light, the potential energy stored by an object's position in a force field,(gravitational, electric or magnetic) elastic energy stored by stretching solid objects, chemical energy released when a fuel burns, and the thermal energy due to an object's temperature. According to mass–energy equivalence, any object that has mass when stationary,(called rest mass) also has an equivalent amount of energy whose form is called rest energy. Conversely, any additional energy above the rest energy will increase an object's mass. For example, if you had a sensitive enough scale, you could measure an increase in mass after heating an object. Living organisms require available energy to stay alive, such as the energy humans get from food. Forms Some examples of different kinds of energy: History

Time The flow of sand in an hourglass can be used to keep track of elapsed time. It also concretely represents the present as being between the past and the future. Time is a dimension in which events can be ordered from the past through the present into the future,[1][2][3][4][5][6] and also the measure of durations of events and the intervals between them.[3][7][8] Time has long been a major subject of study in religion, philosophy, and science, but defining it in a manner applicable to all fields without circularity has consistently eluded scholars.[3][7][8][9][10][11] Nevertheless, diverse fields such as business, industry, sports, the sciences, and the performing arts all incorporate some notion of time into their respective measuring systems.[12][13][14] Some simple, relatively uncontroversial definitions of time include "time is what clocks measure"[7][15] and "time is what keeps everything from happening at once".[16][17][18][19] Temporal measurement and history[edit] World time[edit]

Are We Really All Made of Stars? | Cosmos, Moby’s Song ‘We Are All Made of Stars’, Universe & Solar System | Life's Little Mysteries The theory that everyone and everything on Earth contains minuscule star particles dates back further than Moby's popular 2002 song "We Are All Made of Stars." In the early 1980s, astronomer Carl Sagan hosted and narrated a 13-part television series called "Cosmos" that aired on PBS. On the show, Sagan thoroughly explained many science-related topics, including Earth's history, evolution, the origin of life and the solar system. "We are a way for the universe to know itself. Some part of our being knows this is where we came from. His statement sums up the fact that the carbon, nitrogen and oxygen atoms in our bodies, as well as atoms of all other heavy elements, were created in previous generations of stars over 4.5 billion years ago. "All organic matter containing carbon was produced originally in stars," Impey told Life's Little Mysteries. How star stuff got to Earth When it has exhausted its supply of hydrogen, it can die in a violent explostion, called a nova. Cosmic connections

History Those who cannot remember the past are condemned to repeat it.[1] History (from Greek ἱστορία, historia, meaning "inquiry, knowledge acquired by investigation")[2] is the study of the past, particularly how it relates to humans.[3][4] It is an umbrella term that relates to past events as well as the memory, discovery, collection, organization, presentation, and interpretation of information about these events. Scholars who write about history are called historians. History can also refer to the academic discipline which uses a narrative to examine and analyse a sequence of past events, and objectively determine the patterns of cause and effect that determine them.[5][6] Historians sometimes debate the nature of history and its usefulness by discussing the study of the discipline as an end in itself and as a way of providing "perspective" on the problems of the present.[5][7][8][9] Etymology Ancient Greek ἱστορία[12] (historía) means "inquiry","knowledge from inquiry", or "judge".

What Is Caustic Soda and Where Can You Get It? Key Takeaways: Caustic Soda Caustic soda is one of the common names for sodium hydroxide (NaOH).It is also known as lye, although lye may refer to either potassium hydroxide or sodium hydroxide.Pure caustic soda is sold for making candles or soap.Impure caustic soda is found in drain cleaner.Because lye is used to make illegal drugs, it's harder to buy large quantities than in the past. However, small containers are available in stores and online. Uses of Caustic Soda or Lye Lye is used for soap making, candle making, homemade biodiesel, frosting glass, making several foods, and for chemistry experiments. How To Get Caustic Soda or Lye It's much harder to get hold of lye than it used to be in the past. drain cleaner (check the label) - e.g., Roebic Crystal Drain Cleaner, sold as Lowessodium hydroxide from an online chemical supply storesoap making storecandle making storebiodiesel supply store Helpful Tips Since it's relatively hard to get hold of this chemical, you may need to buy in bulk.

Mass In physics, mass (from Greek μᾶζα "barley cake, lump [of dough]") is a property of a physical body which determines the body's resistance to being accelerated by a force and the strength of its mutual gravitational attraction with other bodies. The SI unit of mass is the kilogram (kg). As mass is difficult to measure directly, usually balances or scales are used to measure the weight of an object, and the weight is used to calculate the object's mass. For everyday objects and energies well-described by Newtonian physics, mass describes the amount of matter in an object. There are several distinct phenomena which can be used to measure mass. Inertial mass measures an object's resistance to changes in velocity m=F/a. The mass of an object determines its acceleration in the presence of an applied force. Units of mass[edit] The kilogram is one of the seven SI base units; one of three which is defined ad hoc, without reference to another base unit. Other units are accepted for use in SI:

Information The ASCII codes for the word "Wikipedia" represented in binary, the numeral system most commonly used for encoding textual computer information In Thermodynamics, information is any kind of event that affects the state of a dynamic system that can interpret the information. Etymology[edit] The English word was apparently derived from the Latin stem (information-) of the nominative (informatio): this noun is derived from the verb informare (to inform) in the sense of "to give form to the mind", "to discipline", "instruct", "teach". Inform itself comes (via French informer) from the Latin verb informare, which means to give form, or to form an idea of. Furthermore, Latin itself already contained the word informatio meaning concept or idea, but the extent to which this may have influenced the development of the word information in English is not clear. Information theory approach[edit] As sensory input[edit] Often information can be viewed as a type of input to an organism or system.

Mulungu Bark and Mulungu Powder Mulungu Mulungu is a medium-sized, well-branched tree that grows 10-14 m high. It produces many pretty, reddish-orange flowers (pollinated by hummingbirds) at the ends of the tree's many branches. Several Erythrina tree species are used by indigenous peoples in the Amazon as medicines, insecticides, and fish poisons. In both North and South American herbal medicine, Mulungu is considered to be an excellent sedative to calm agitation and nervous coughs and to treat other nervous system problems including insomnia and anxiety. Mulungu is not very widely known or used in North America; mostly appearing as an ingredient in only a few herbal formulas for anxiety or depression.

Length In geometric measurements, length is the longest dimension of an object.[1] In the International System of Quantities, length is any quantity with dimension distance. In other contexts "length" is the measured dimension of an object. For example it is possible to cut a length of a wire which is shorter than wire thickness. Length may be distinguished from height, which is vertical extent, and width or breadth, which are the distance from side to side, measuring across the object at right angles to the length. Length is a measure of one dimension, whereas area is a measure of two dimensions (length squared) and volume is a measure of three dimensions (length cubed). History[edit] Measurement has been important ever since humans settled from nomadic lifestyles and started using building materials; occupying land and trading with neighbours. After Albert Einstein's special relativity, length can no longer be thought of being constant in all reference frames. Units[edit] See also[edit]