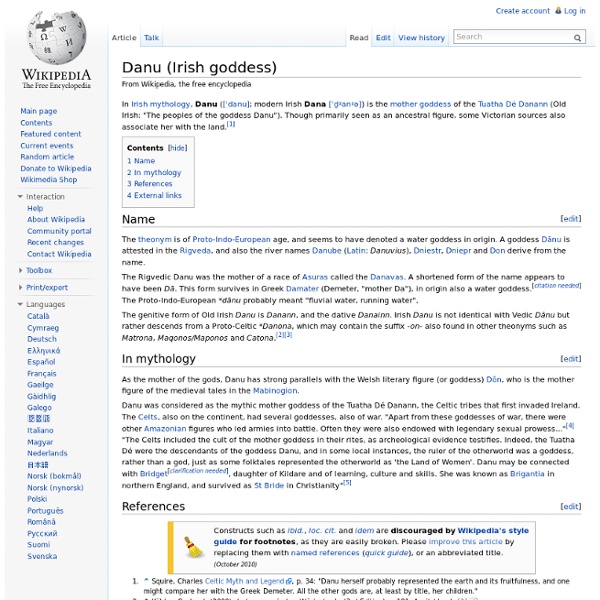 In Irish mythology, Danu ([ˈdanu]; modern Irish Dana [ˈd̪ˠanˠə]) is the mother goddess of the Tuatha Dé Danann (Old Irish: "The peoples of the goddess Danu"). Though primarily seen as an ancestral figure, some Victorian sources also associate her with the land.[1] The genitive form of Old Irish Danu is Danann, and the dative Danainn. Irish Danu is not identical with Vedic Dānu but rather descends from a Proto-Celtic *Danona, which may contain the suffix -on- also found in other theonyms such as Matrona, Maqonos/Maponos and Catona.[5][6] As the mother of the gods, Danu has strong parallels with the Welsh literary figure (or goddess) Dôn, who is the mother figure of the medieval tales in the Mabinogion.[7] Jump up ^ Squire, Charles Celtic Myth and Legend, p. 34: "Danu herself probably represented the earth and its fruitfulness, and one might compare her with the Greek Demeter. Associations between the Welsh Dôn and the Irish Dana Related:  Esoteric Terms

Bon Yungdrung is a left facing swastika, a sacred symbol of Bon religion.[1] Gods and spirits[edit] Bonpos cultivate household gods in addition to other deities: Traditionally in Tibet divine presences or deities would be incorporated into the very construction of the house making it in effect a castle (dzong) against the malevolent forces outside it. Another set of deities are the White Old Man, a sky god, and his consort. History[edit] Rediscovery[edit] Tonpa Shenrab Miwoche visited Kongpo and found people whose practice involved spiritual appeasement with animal sacrifice. “A Cavern of Treasures” (mdzod phug)[edit] For students of Tibetan culture in general, the mDzod phug is one of the most intriguing of all Bon scriptures, since it is the only lengthy bilingual work in Zhang-zhung and Tibetan. 18th century[edit] The Dzungar people invaded Tibet in 1717 and deposed a pretender to the position of Dalai Lama who had been promoted by Lhabzang, the titular King of Tibet. 19th century[edit] Studies

What is Fornication? Fornication is universally condemned among religions, yet the definition of the word has been subjected to centuries of misinterpretation and misunderstanding, and often, intentional misuse. Originally, the term fornication was derived from the Indo-European word gwher, "to burn." The study of this root word and its many branches reveals the meanings of many religious symbols. Etymology of Fornication Originated from: gwher-, meaning "To heat, warm." It is common to read that fornication is derived from the Latin fornix. fornic or fornix (Latin): plural: fornices. In Roman times, brothels were called "fornices," seemingly because prostitutes could be hired near the "arches" of certain buildings. Nonetheless, the most significant relationship here is between gwher, "to burn," and the word fornication. Fornication Defined in Christianity Fornication Defined in Judaism Christianity was derived from the Jewish tradition. In other words, fornication can occur with one's own wife.

Academia's Case of Stockholm Syndrome Earlier this year, we launched Researchers.One, a scholarly publication platform open to all researchers in all fields of study. Founded on the principles of academic freedom, researcher autonomy, and scholarly quality, Researchers.One features an innovative author-driven peer review model, which ensures the quality of published work through a self-organized process of public and non-anonymous pre- and post-publication peer review. Believing firmly that researchers can and do uphold the principles of good scholarship on their own, Researchers.One has no editorial boards, gatekeepers, or other barriers to interfere with scholarly discourse. In its first few months, Researchers.One has garnered an overwhelmingly positive reception, both for its emphasis on core principles and its ability to attract high quality publications from a wide range of disciplines, including mathematics, physics, philosophy, probability, and statistics. Related The Unbearable Asymmetry of Bullshit

Metanoia - Teshuvah of the Mind In another article I mentioned that the central theme of the High Holiday season is teshuvah (תְּשׁוּבָה), a word often translated as "repentance," though it's more accurately understood as turning (shuv) to God in response to His call. Indeed, teshuvah can mean both these things: turning and answering... A related Hebrew word is nacham (נָחַם), which literally means to "sigh" as a way of expressing regret or sorrow, usually in response to something in the past. Sometimes nacham is used to express the idea of comfort, in the sense of consolation for something lost. The ancient Greek translation of the Bible (i.e., LXX and NT) generally used the word strepho (στρέφω) for the word shuv, and the word metanoia (μετάνοια) for nacham. In the New Testament, the Greek word metanoia (and its related verb, metanao) is the most commonly used word to express the idea of "repentance." Since we all necessarily must think in order to live, we should value clear thinking.