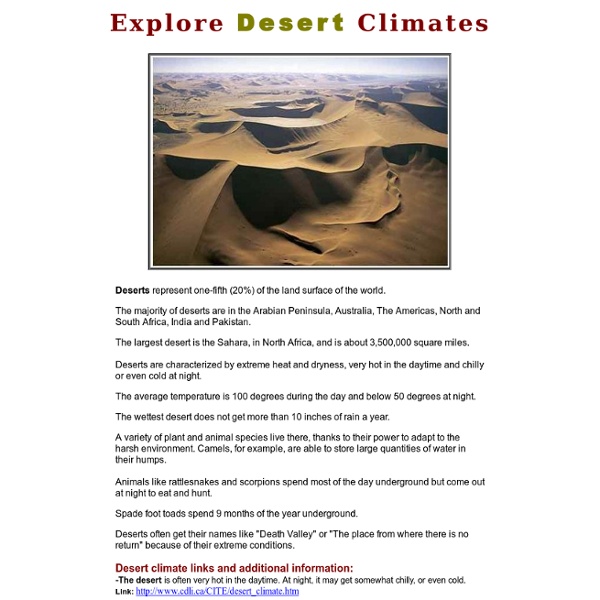 Deserts represent one-fifth (20%) of the land surface of the world. The majority of deserts are in the Arabian Peninsula, Australia, The Americas, North and South Africa, India and Pakistan. The largest desert is the Sahara, in North Africa, and is about 3,500,000 square miles. Deserts are characterized by extreme heat and dryness, very hot in the daytime and chilly or even cold at night. The average temperature is 100 degrees during the day and below 50 degrees at night. The wettest desert does not get more than 10 inches of rain a year. A variety of plant and animal species live there, thanks to their power to adapt to the harsh environment. Animals like rattlesnakes and scorpions spend most of the day underground but come out at night to eat and hunt. Spade foot toads spend 9 months of the year underground. Deserts often get their names like "Death Valley" or "The place from where there is no return" because of their extreme conditions.

American Desert Biomes - Desert Environments - World Desert Biomes Deserts cover more than one fifth of the Earth's land, and they are found on every continent. Deserts can be classified as "hot" or "cold". Deserts receive less than 10 inches of precipitation a year. Lack of water creates a survival problem for all desert organisms, animals, plants and people. What is a desert? Learn about how deserts are classified and about the plant and animal life that adapt to the desert biome.

Deserts Far from being barren wastelands, deserts are biologically rich habitats with a vast array of animals and plants that have adapted to the harsh conditions there. Some deserts are among the planet's last remaining areas of total wilderness. Yet more than one billion people, one-sixth of the Earth's population, actually live in desert regions. Deserts cover more than one fifth of the Earth's land, and they are found on every continent. A place that receives less than 10 inches (25 centimeters) of rain per year is considered a desert. Difference Between Tundra and Desert Tundras and deserts are both fairly large areas which see very little rain throughout most of the year. Due to this, these areas are extremely difficult to live on, and can be near uninhabitable at times. A tundra is an extremely cold area which is usually frozen over; deserts, on the other hand, are exactly the opposite, as they are excessively hot and sandy. While temperatures in tundras are shockingly low, high temperatures are a defining characteristic of deserts (particularly during the day time).

Grevy's Zebra, Equus grevyi by Jay Sharp The Grévy’s zebra belongs to the Equidae family, which includes thehorses and donkeys as well as the plains and mountain zebras. The Grévy’s zebra – the first of the zebras to evolve – staked its primary range out of sparse plains and scrublands in the Horn of Africa. Ithas developed finely tuned adaptations to its arid home. Characteristics The Grévy’s, roughly 25 to 35 percent larger than the plains and mountain species, is one of the odd-toed ungulates—the large grazing and browsing mammals that have an odd number of weight-bearing toes, or hoofs (actually modified toenails), on each foot. Venomous Snakes - Colorado Desert Sidewinder Scientific name: Crotalus cerastes laterorepens The average size of a mature Colorado Desert Sidewinder is 1.5 - 2 feet, with some getting as large as 2.5 feet in length. The Colorado Desert Sidewinder looks as if it has horns over its eyes and is sometimes called the horned rattlesnake. These horns are actually upturned scales, and are not truly horns.

Jackrabbits, Jackrabbit Pictures, Jackrabbit Facts Jackrabbits are actually hares, not rabbits. Hares are larger than rabbits, and they typically have taller hind legs and longer ears. Jackrabbits were named for their ears, which initially caused some people to refer to them as "jackass rabbits." The writer Mark Twain brought this name to fame by using it in his book of western adventure, Roughing It. Arabian (Dromedary) Camels, Arabian (Dromedary) Camel Pictures, Arabian (Dromedary) Facts The ancient camel question is: One hump or two? Arabian camels, also known as dromedaries, have only one hump, but they employ it to great effect. The hump stores up to 80 pounds (36 kilograms) of fat, which a camel can break down into water and energy when sustenance is not available. These humps give camels their legendary ability to travel up to 100 desert miles (161 kilometers) without water. Camels rarely sweat, even in desert temperatures that reach 120°F (49°C), so when they do take in fluids they can conserve them for long periods of time. In winter, even desert plants may hold enough moisture to allow a camel to live without water for several weeks.