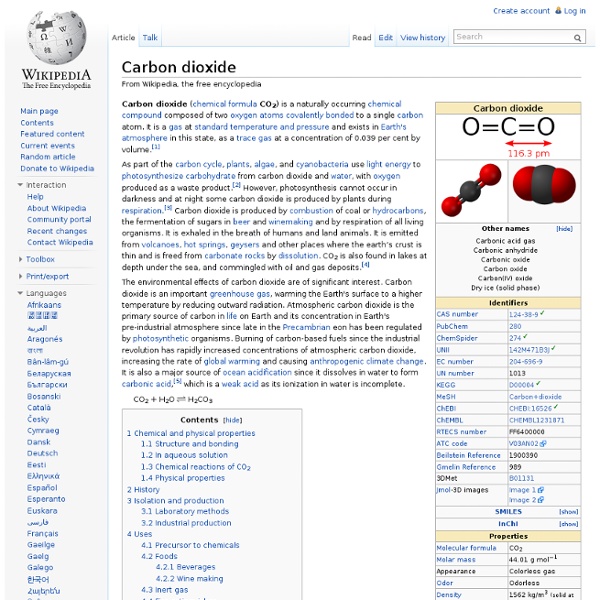 Carbon dioxide (chemical formula CO2) is a naturally occurring chemical compound composed of 2 oxygen atoms each covalently double bonded to a single carbon atom. It is a gas at standard temperature and pressure and exists in Earth's atmosphere in this state, as a trace gas at a concentration of 0.039 per cent by volume.[1] The environmental effects of carbon dioxide are of significant interest. Atmospheric carbon dioxide is the primary source of carbon in life on Earth and its concentration in Earth's pre-industrial atmosphere since late in the Precambrian eon was regulated by photosynthetic organisms. Carbon dioxide is an important greenhouse gas; burning of carbon-based fuels since the industrial revolution has rapidly increased the concentration, leading to global warming. History Chemical and physical properties Structure and bonding The carbon dioxide molecule is linear and centrosymmetric. In aqueous solution The hydration equilibrium constant of carbonic acid is (at 25 °C). . Uses

Carbon capture and storage Schematic showing both terrestrial and geological sequestration of carbon dioxide emissions from a coal-fired plant An integrated pilot-scale CCS power plant was to begin operating in September 2008 in the eastern German power plant Schwarze Pumpe run by utility Vattenfall, in the hope of answering questions about technological feasibility and economic efficiency. CCS applied to a modern conventional power plant could reduce CO2 emissions to the atmosphere by approximately 80–90% compared to a plant without CCS.[4] The IPCC estimates that the economic potential of CCS could be between 10% and 55% of the total carbon mitigation effort until year 2100.[4] Storage of the CO2 is envisaged either in deep geological formations, or in the form of mineral carbonates. Capture[edit] Concentrated CO2 from the combustion of coal in oxygen is relatively pure, and could be directly processed. An alternate method under development is chemical looping combustion (CLC). Transport[edit] Sequestration[edit]

Enhanced Oil Recovery Projects with CO2. Challenges, Standards and more | PowerPlantCCS Blog Read the rest of this entry » CO2 Enhanced Oil Recovery World over, many countries are grappling with the twin challenges of reducing dependence on foreign energy sources as well as decreasing emissions of greenhouse gases, the topic of carbon dioxide (CO2) enhanced oil recovery (EOR) has therefore received increased attention. Studies reveal that CO2 -EOR has a substantial immediate- to long-term role to play in both increasing domestic oil production in a responsible way, and in sequestering CO2 underground. Enhanced Oil Recovery (also known as improved oil recovery or tertiary oil recovery) is a technique that is employed to increase the recovery of crude oil by injecting carbon-dioxide into the pore spaces of the rocks to extract from an oil field. Now, how does injecting CO2 into the pore spaces of a rock aid in crude oil recovery? When carbon-dioxide is injected into an oil reservoir, it mixes readily with the residual crude oil/ stranded oil. Image Courtesy: NETL Break- up costs: No.

Powerplant CCS Blog - Latest in CO2 Sequestration at Power Plants Super critical coal power plant to come up in Malaysia Super critical coal fired power plant coming up at Malaysia. Carbon Capture and Storage Events The Second International Forum on Transportation of Co2 by Pipeline: The Second International Forum on Transportation of Co2 by pipeline (22 – 23 June 2011) is organized by Tiratsoo Technical and Clarion in Newcastle, UK. Hydrological Cycle and Climate Change Hydrological cycle refers to the movement of water in various forms within different spheres of the earth surface. Enhanced Oil Recovery Projects with CO2. CO2 Enhanced Oil Recovery World over, many countries are grappling with the twin challenges of reducing dependence on foreign energy sources as well as decreasing emissions of greenhouse gases, the topic of carbon dioxide (CO2) enhanced oil recovery (EOR) has therefore received increased attention. CCS Projects in China China is the largest Carbon dioxide emitter in the world and it emits more than 3 billion ton Co2 per year.

Amid U.S.-China Energy Tension, "Clean Coal" Spurs Teamwork The world's two largest energy consumers have clashed over their choices for fueling their economies, with solar industry subsidies and China's oil imports from Iran particular sore points. But with Xi's stop in Washington an important one on his path to take over China's presidency later this year, and the two leaders hoping to highlight cooperation, energy offers an opportunity for the two nations to emphasize their collaboration: The deals they've struck on projects to clean up coal. In China, coal is king. U.S. energy companies, from small start-ups to one of the nation's largest utilities, Duke Energy, have concluded that they must work with China to keep a hand in technology to reduce the greenhouse gas emissions of coal-fired electricity: carbon capture and storage (CCS). (Related: Out of Thin Air: Hopes for Capturing Carbon Dioxide ) China, on the other hand, has been building one new coal-fired plant a week on average to stoke its growing economy.

CCST @ MIT Carbon Capture and Storage Carbon Capture and Storage (CCS), or carbon sequestration, is a means of separating out carbon dioxide when burning fossil fuels, collecting it and subsequently “dumping” it underground or in the sea. CCS is an integrated concept consisting of three distinct components: CO2 capture, transport and storage (including measurement, monitoring and verification). All three components are currently found in industrial operation today, although mostly not for the purpose of CO2 storage. A 2010 Government Accountability Office report noted that the largest demonstration of carbon capture in a coal plant was at a pilot scale (TRL 7) or less, and that demonstration of large scale integrated CCS systems is a technical challenge that is at least 10-15 years away from being realized.[1] System Overview CCS consists of three main components: (1) capture, (2), transport, and (3) storage. Capture Pre-combustion capture systems remove CO2 prior to combustion. According to the U.S. Transport Storage Financing

Carbon Capture and Sequestration 101 A Department of Energy artist rendering of the next-generation FutureGen power plan, which, if built, will employ carbon capture and storage. March 6, 2009 Download this brief (pdf) CCS is at the center of the debate , primed by the American Recovery and Reinvestment Act and President Obama’s budget blueprint, on how to reduce U.S. Technology currently exists to capture CO2 emissions from coal-fired plants and to sequester that CO2 in underground geologic formations. There are many ways to meet growing consumer energy demand, including increased energy efficiency and greater reliance on renewable energy sources. In CCS operations, CO2 is separated from the fuel and captured either before or after the combustion of coal. Energy companies boast extensive experience sequestering CO2 by injecting it into oil fields to enhance oil recovery. Efforts are underway to develop capture technologies for traditional pulverized coal power plants. Establishing a greenhouse gas cap-and-trade program