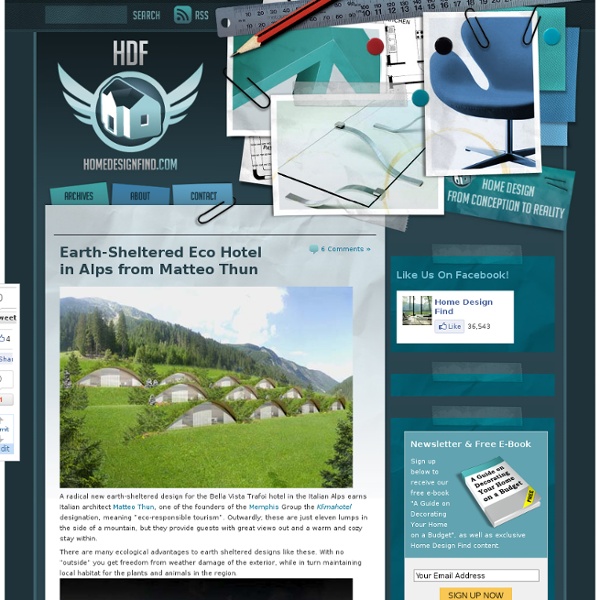 A radical new earth-sheltered design for the Bella Vista Trafoi hotel in the Italian Alps earns Italian architect Matteo Thun, one of the founders of the Memphis Group the Klimahotel designation, meaning “eco-responsible tourism”. Outwardly; these are just eleven lumps in the side of a mountain, but they provide guests with great views out and a warm and cozy stay within. There are many ecological advantages to earth sheltered designs like these. With no “outside” you get freedom from weather damage of the exterior, while in turn maintaining local habitat for the plants and animals in the region. Only the huge glass frontages remain as a sign of human habitations. Energy reduction is the main advantage to underground building. Source: Treehugger Related:  Subterranean & Earth Sheltered

See That Tiny Hobbit-Like Entrance? Well, Just Wait Til You Go Inside… I’m So Jealous. It’s not every day that people are struck with the motivation to do something downrightawesome. Luckily for us, Ash Yeates of Torii Gardens decided he wasn’t playing around. Whether it was because he is a huge Hobbit fan or maybe he was bored, he decided to build his very own hobbit hole. Even if you’re not J.R.R. Tolkein fan, you may love this. This is the glorious finished product. First you’ll need to clear space. Then, they built a strong wooden frame within the cleared hole. There was lots of digging by hand. It took a long time to get ready, but they were finally able to close and seal the hole. “The roof was again over engineered to keep moisture out and includes a variety of layered barriers which tuck right around the internal watertight pod created for the interior.” They added turf to the roof and some finishing touches. Once the interior was finished, it was downright COZY. Even though though it looks to be a bit small.. There’s plenty of room for relaxing. One of the proud owners.

Subterranean Living Down a dirt road and between thickets of trees, Paul Queen lives inside a grassy, man-made hill. Deer try to stroll across his rooftop. Gopher tortoises attempt to tunnel into the walls. Stephanie Thomas-Rees, a research architect with the Florida Solar Energy Center, said the state's sandy soil and high water table make managing moisture difficult in an earth-sheltered home. "If some contractor came up with a bunch of model homes and put them all in one place where the general public would just walk through them, it would change a lot of people's minds in a hurry," he said. Now Take A Look At This One In Australia:

Earth Sheltered Earth Sheltered Homes "Another type of building is emerging: one that actually heals the scars of its own construction. It conserves rainwater and fuel and it provides a habitat for creatures other than the human one. Maybe it will catch on, maybe it won't. The earth sheltered house uses the ground as insulating blanket which effectively protects it from temperature extremes, wind, rain and extreme weather events. Fifteen feet below ground the soil maintains a fairly constant temperature equal to the annual average temperature of the area's surface air. There are two types of earth sheltered building. Honingham Earth Sheltered Social Housing. Looks like vertical placed logs are helping to support the berm on the right. Earth sheltered home with conventional facade. Earth sheltered home, as above. The facade may accommodate any architectural styling of the home owners choosing. An award winning earth shelter dwelling by Cam Architects. Side wall of above Sedum House: camarchitects.co.uk

Hobbit House Designs - Inspiring Habitats for Hobbits...and Humans! The inspiring hobbit house designs featured here reflect the genius of talented artisans around the globe. A treasure-trove of habitats for hobbits -- both "real" and in miniature or from a movie set -- the designs are bound to generate a host of helpful ideas for creating your own "hobbitat!" Inspired by the writings of J.R.R.Tolkien (1892-1973) and popularized by a series of movies based upon his fantasy novels (i.e., The Hobbit and The Lord of the Rings), hobbit houses are steadily gaining ground. In the Spirit of Hobbit Houses Everywhere "Technically" speaking, a hobbit house is an environmentally friendly dwelling built into the earth with a green roof and round windows and doors. Pictured at right is a delightful miniature composition by artist Sally J. Pictured below is another one of Sally's miniature "environmental sculptures." Nestled in the hillside of a woodland forest in northwestern Montana is a magical hobbit village. Hobbit House Designs for Humans Storybook Style

Torus House: Curved Courtyard-Wrapping Urban Oasis Privacy and green space can be hard to come by in the city – this house manages to feature both in spades, despite its central location in the Quang Ninh province of Vietnam. Designed by Vo Trong Nghia Architects, a fundamental architectural gesture gives shape to the structure and space alike – an upward-spiraling stone building that forms around and within green gardens and roofs. From the architects: “Circulating flow runs around the courtyard and continues to the green roof, connecting all places in the house. This courtyard and green roof compose a sequential garden, which creates a rich relationship between inside and outside the house.” The result is a series of rooms that look down on the central light well and garden area, or allow residents to walk right out into it or onto the tops of the boundary-defining walls, which are themselves grass roofs. Of the materials: “To create a wall with smooth curvature, cubic stones with a thickness of 10cm were carefully stacked.

Classic Stone Barn Home With a Contemporary Other Half Converting an old barn into a home is quite a project in itself, but adding a new living space onto that barn can be a very ambitious undertaking. PPA Architects created a stunning modern addition to this barn conversion in Lesponne in the heart of picturesque Hautes-Pyrénées, France. The barn on the property had already been converted to a gorgeous vacation home with rich wood floors, exposed timber beams, and classic stone walls. The incredible living space needed some extra room, however, for a modern family and their guests to stretch out into. The extension project added on a new living area that both complements and perfectly offsets the traditional stone architecture of the original barn. The stone and wood from the barn continue to play a large part in the interior of the newly-extended living space.

Fallingwater Cottages, or: How to Win a Design Competition The right answer is only obvious in retrospect, as with this wonderfully-integrated and highly-contextual solution to a difficult problem: what does one make that neither adds to nor subtracts from the most famous house in American architectural history? Frank Lloyd Wright’s own autobiographical words gave the winning group, Padkau Architects, the first hint: “No house should ever be on a hill or on anything …. It should be of the hill. Belonging to it. Hill and house should live together each the happier for the other.” An ethos of environmental integration pervades this project, from the mounding approach to the raw plywood-finished interiors. Another clue comes from the nature of the project – it had needed to be small and green, require few active systems and less electricity than a typical home, and ideally integrating natural heating and cooling techniques.

Subtle Subterranean House is Underground & Understated Many underground homes have relatively extreme designs, either due to ultra-wealthy clients who give their architects a (literal or at least metaphorical) blank check to design a luxury dream house, or because of existing conditions (for instance; retrofitting an old military base and/or missile silo to be a new home). This modest alternative shows the power of simplicity in a nonetheless remarkable minimalist home in the ground. BCHO Architects started by carving a basic box-shaped void into the earth, holding a place for the space with likewise simple retaining walls of rough and raw board-formed concrete. A side stairway starts the sequence of movement down into this space, slowly taking into increasingly more enclosed areas. The displaced soil from the digging process was used for the rammed-earth parts of the final structure. There is also a heavy-and-thick theme that runs throughout the different materials, structures and supports of the home.