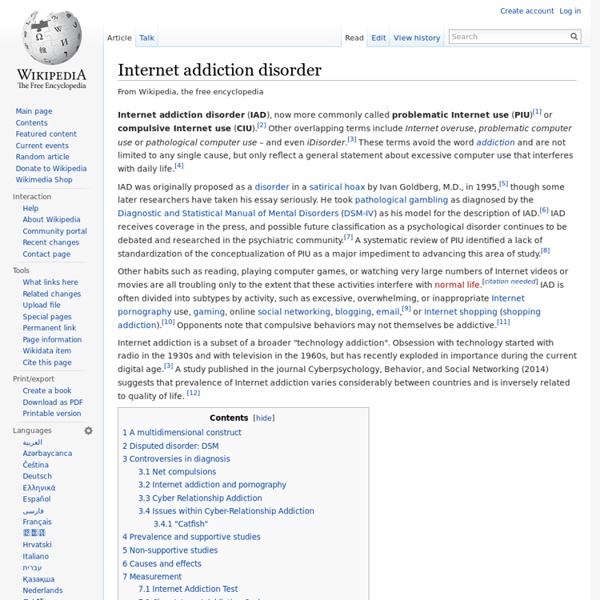 Internet addiction disorder (IAD), now more commonly called problematic Internet use (PIU)[1] or compulsive Internet use (CIU).[2] Other overlapping terms include Internet overuse, problematic computer use or pathological computer use – and even iDisorder.[3] These terms avoid the word addiction and are not limited to any single cause, but only reflect a general statement about excessive computer use that interferes with daily life.[4] IAD was originally proposed as a disorder in a satirical hoax by Ivan Goldberg, M.D., in 1995,[5] though some later researchers have taken his essay seriously. Other habits such as reading, playing computer games, or watching very large numbers of Internet videos or movies are all troubling only to the extent that these activities interfere with normal life. Internet addiction is a subset of a broader "technology addiction". §A multidimensional construct[edit] §Disputed disorder: DSM[edit] Jerald J. §Controversies in diagnosis[edit] §Net compulsions[edit] Dr.

Signs and Symptoms of Internet or Computer Addiction The Internet has made life a lot easier by making information more accessible to all and creating connections with different people around the world. However, it has also led a lot of people to spend too much time in front of the computer, so much so that it becomes the center of their lives. This can lead to an Internet or computer addiction. Computer/Internet Addiction Symptoms, Causes and Effects An Internet or computer addiction is the excessive use of the former or the latter.

"Drugs, Brains, and Behavior - The Science of Addiction" Skip to main content En español Home » Publications » The Science of Addiction CRSH - Subventions de partenariat - Demande détaillée Thank you for visiting the brand new SSHRC website (www.sshrc-crsh.gc.ca). As a result of the redesign, it is possible that some link(s) may be broken. The information you are seeking is probably still available, but is now in a different location. Internet Addiction Disorder 1.What is Internet Addiction Disorder? Internet addiction is defined as any online-related, compulsive behavior which interferes with normal living and causes severe stress on family, friends, loved ones, and one’s work environment. Internet addiction has been called Internet dependency and Internet compulsivity.

It's official: Internet Addiction DOES NOT exist For several years now the popular media has liked to talk about people being “addicted” to the Internet. Indeed you will find that I have been interviewed several times about this “condition” and that my views have appeared in many articles on the topic. I have always cautioned people against thinking they are “addicted”. Even though several schools of psychological and psychiatric thinking define addiction slightly differently, there is a common theme which helps clinicians determine whether or not someone is truly addicted to something.

Internet addiction Disorder: The Mind Prison-types As of July 1, 2013 ThinkQuest has been discontinued. We would like to thank everyone for being a part of the ThinkQuest global community: Students - For your limitless creativity and innovation, which inspires us all. Teachers - For your passion in guiding students on their quest. Partners - For your unwavering support and evangelism. Addiction Addiction is the continued repetition of a behavior despite adverse consequences,[1] or a neurological impairment leading to such behaviors.[2] Addictions can include, but are not limited to, drug abuse, exercise addiction, food addiction, computer addiction and gambling. Classic hallmarks of addiction include impaired control over substances or behavior, preoccupation with substance or behavior, continued use despite consequences, and denial.[3] Habits and patterns associated with addiction are typically characterized by immediate gratification (short-term reward), coupled with delayed deleterious effects (long-term costs).[4] Substance dependence[edit] Substance dependence can be diagnosed with physiological dependence, evidence of tolerance or withdrawal, or without physiological dependence.

Quand l'utilisation d'Internet devient un problème Références Voici des références sur le thème de la cyberdépendance. Caplan, S. Is Internet Addiction a Real Thing? Marc Potenza, a psychiatrist at Yale and the director of the school’s Program for Research on Impulsivity and Impulse Control Disorders, has been treating addiction for more than two decades. Early in his career, he, like most others studying addiction at the time, focussed on substance-abuse problems—cocaine and heroin addicts, alcoholics, and the like. Soon, however, he noticed patients with other problems that were more difficult to classify. Internet Addiction Around the World The first Internet Congress on Internet Addiction Disorders was held in Milan earlier this year. Australia has developed the first in-patient treatment programs for adolescents. Italy has treatment centers in Rome and Milan, and France uses early education to prevent technology addictions. Research in Scandinavian countries suggests an increased risk of Internet addiction among young people.

Cycles and Stages of Addiction Annette Nay, Ph.D. Copyright © 1997 There are three basic stages in any addictive process. First, there is a change in the thought process. Distinguishing Brain From Mind - Sally Satel juliendn/Flickr From the recent announcement of President Obama's BRAIN Initiative to the Technicolor brain scans ("This is your brain on God/love/envy etc") on magazine covers all around, neuroscience has captured the public imagination like never before. Understanding the brain is of course essential to developing treatments for devastating illnesses like schizophrenia and Parkinson's.