The Books You Read Really Make You Who You Are. Scientists Say Your “Mind” Isn’t Confined to Your Brain, or Even Your Body. You might wonder, at some point today, what’s going on in another person’s mind. 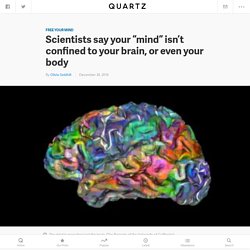 You may compliment someone’s great mind, or say they are out of their mind. You may even try to expand or free your own mind. But what is a mind? Defining the concept is a surprisingly slippery task. The mind is the seat of consciousness, the essence of your being. Happiness. Happiness is a mental or emotional state of well-being defined by positive or pleasant emotions ranging from contentment to intense joy.[1] A variety of biological, psychological, religious, and philosophical approaches have striven to define happiness and identify its sources. 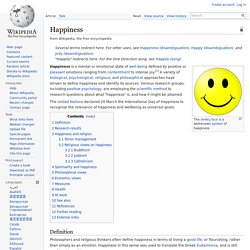 Various research groups, including positive psychology, are employing the scientific method to research questions about what "happiness" is, and how it might be attained. The United Nations declared 20 March the International Day of Happiness to recognise the relevance of happiness and wellbeing as universal goals. Definition. Text For Humanity - #TextForHumanity. Stutterer (film) Greenwood, a lonely typographer, makes a phone call to discuss a bill issue, but his stutter keeps him from getting his words out and he is hung up on. 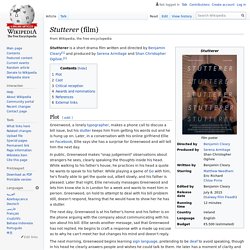 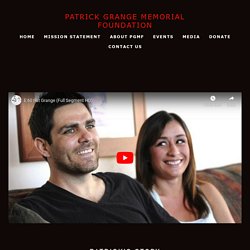 Patrick was a beloved son, brother, and friend who enjoyed helping others and had a passion for the sport of soccer. After an incredibly successful youth soccer career which included numerous state championships, being a part of the Olympic Development Program, and being named the Tribune High School Player of the Year in New Mexico, Patrick accepted a scholarship to play NCAA Division I soccer at the University of Illinois-Chicago. Following his sophomore year, Patrick transferred to the University of New Mexico where he helped lead the Lobos into the Sweet 16 in 2004. Chronic traumatic encephalopathy in sports. Most documented cases of chronic traumatic encephalopathy have occurred in athletes involved in contact sports such as boxing, American football, wrestling, ice hockey, rugby and soccer.[1][2] Other risk factors include being in the military, prior domestic violence, and repeated banging of the head.[1] The exact amount of trauma required for the condition to occur is unknown.[1] Below is a list of notable cases of CTE in sports. 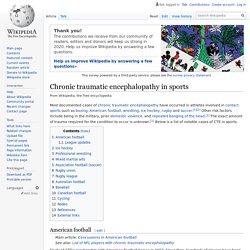 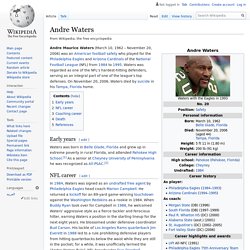 As a senior at Cheyney University of Pennsylvania he was recognized as All-PSAC.[2] NFL career[edit] Waters served as part of the Eagles' defensive unit that was regarded as one of the league's all-time best, in 1991 ranking first statistically in both run and pass defense, as well as total defense. His hard-hitting style translated into leading the team in tackles for four seasons and endeared him with Philadelphia fans but often led to penalties and fines for some of his tackles. Coaching career[edit] After retiring as a player, Waters worked as a college football coach. 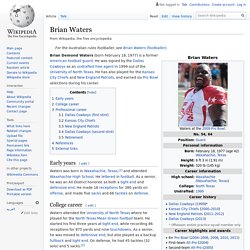 He was signed by the Dallas Cowboys as an undrafted free agent in 1999 out of the University of North Texas. He has also played for the Kansas City Chiefs and New England Patriots, and earned six Pro Bowl selections during his career. Early years[edit] College career[edit] Terry Long (American football) Terry Luther Long (July 21, 1959 – June 7, 2005) was an American college and professional football player who was an offensive lineman in the National Football League (NFL) for eight seasons during the 1980s and early 1990s. 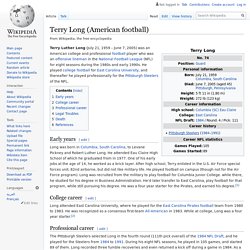 He played college football for East Carolina University, and thereafter he played professionally for the Pittsburgh Steelers of the NFL. Chronic traumatic encephalopathy. Neurodegenerative disease caused by repeated head injuries Chronic traumatic encephalopathy (CTE) is a neurodegenerative disease caused by repeated head injuries.[1] Symptoms may include behavioral problems, mood problems, and problems with thinking.[1] Symptoms typically do not begin until years after the injuries.[2] CTE often gets worse over time and can result in dementia.[2] It is unclear if the risk of suicide is altered.[1] Most documented cases have occurred in athletes involved in contact sports such as boxing, American football, professional wrestling, ice hockey, rugby, and soccer.[1][4] Other risk factors include being in the military, prior domestic violence, and repeated banging of the head.[1] The exact amount of trauma required for the condition to occur is unknown.[1] Definitive diagnosis can only occur at autopsy.[1] Chronic traumatic encephalopathy is a form of tauopathy.[1] Signs and symptoms[edit] 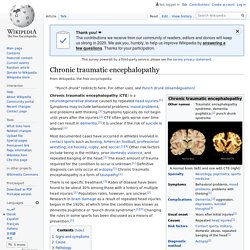 Bennet Omalu. Nigerian-American pathologist Bennet Ifeakandu Omalu (born September 30, 1968[1]) is a Nigerian-American physician, forensic pathologist, and neuropathologist who was the first to discover and publish findings of chronic traumatic encephalopathy (CTE) in American football players while working at the Allegheny County coroner's office in Pittsburgh.[2] He later became the chief medical examiner for San Joaquin County, California, and is a professor at the University of California, Davis, department of medical pathology and laboratory medicine.[3] Early life[edit] Omalu was born in Nnokwa, Idemili South, Anambra in southeastern Nigeria on September 30, 1968,[1] the sixth of seven siblings. 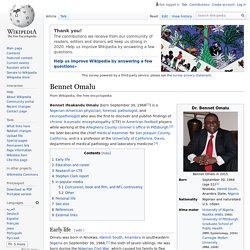 He was born during the Nigerian Civil War, which caused his family to flee from their home in the predominantly Igbo village of Enugu-Ukwu in southeastern Nigeria. Education and career[edit] Mike Webster. American football player Webster was the first former NFL player diagnosed with chronic traumatic encephalopathy (CTE).[2] Since his death, he has become a symbol for head injuries in the NFL and the ongoing debate over player safety.[2] His doctors were of the opinion that multiple concussions during his career damaged his frontal lobe, which caused cognitive dysfunction.[3] Webster died in 2002 at the age of 50 of a heart attack.

[edit] Mike Webster was regarded as the best center in the Big Ten during most of his career at the University of Wisconsin. [citation needed] At 6-foot-1, 255 pounds, he was drafted in the fifth round of the 1974 NFL Draft by the Pittsburgh Steelers. Allen Newell. Allen Newell (March 19, 1927 – July 19, 1992) was a researcher in computer science and cognitive psychology at the RAND Corporation and at Carnegie Mellon University’s School of Computer Science, Tepper School of Business, and Department of Psychology. He contributed to the Information Processing Language (1956) and two of the earliest AI programs, the Logic Theory Machine (1956) and the General Problem Solver (1957) (with Herbert A. Simon). He was awarded the ACM's A.M. Everyone Knows Memory Fails as You Age. But Everyone Is Wrong. So how do we account for our subjective experience that older adults seem to fumble with words and names? First, there is a generalized cognitive slowing with age — but given a little more time, older adults perform just fine.

Second, older adults have to search through more memories than do younger adults to find the fact or piece of information they’re looking for. Neuro RX Gamma headset helps Alzheimer’s patients recover their memories. A Canadian biotechnology company has been able to devise a new headset that will bring a medical and therapeutic breakthrough for Alzheimer’s patients, as it can work to restore memory to patients. Scientists believe that shining light directly into the brain areas damaged in Alzheimer’s through the nose and skull can reverse the disease. The new device, called the Neuro RX Gamma headset, being tested was developed by Vielight, a leader in brain photobiomodulation (PBM) technology.

The headset equipped with LEDs is based on Vielight’s proprietary PBM technology. The Neuro RX Gamma is non-invasive, delivers near-infrared energy, pulsing at the gamma rate of 40Hz, to the region responsible for memory in the brain in daily treatment sessions. It has been designed to be suitable for home-use. The infrared light is delivered through four diodes positioned over the scalp and one positioned inside the nostril. Internet addiction disorder. Exercise and dementia - Health Report - ABC Radio National. On the Journey to New Habits, Take Tiny Steps. Concussion. Second-impact syndrome. Mindfulness.

Reference. Reference is a relationship between objects in which one object designates, or acts as a means by which to connect to or link to, another object. The first object in this relation is said to refer to the second object. Sarah Huckabee Sanders Apologizes for Mocking Biden’s Remarks on Stuttering. Sarah Huckabee Sanders apologized late Thursday after she mocked comments by former Vice President Joseph R. Cure Alzheimer's Fund. New Evidence for the Power of Grit.

Primary progressive aphasia. Terry Jones. Mental Health Benefits of the Great Outdoors. Need to De-Stress? Watch This Video of Alpacas Peacefully Grazing While Enjoying a Stunning Sunset. New drug curbs dementia’s delusions, researchers find. A Parent's Guide to Sadfishing, Explained by a Teenager. Mind and body. Introversion vs. Loneliness. In Praise of Missing Out: Psychoanalyst Adam Phillips on the Paradoxical Valu... Joe Biden's Stutter, and Mine. Pinterest. The Real Causes of Depression. Being Lonely Can Warp Your Health And Your Genes.

What percentage of your brain do you use? - Richard E. Cytowic. Controversy of Intelligence: Crash Course Psychology #23. The Darkest Truth About Love. What Makes Men Cry? The Science of the Friend Zone. Anxiety Hurts. Philosophy of self. Philosophy of mind. Travel Tips for Introverts. 4 Psychological Terms That You're Using Incorrectly. Cold reading. Are People Really Left-Brained or Right-Brained? 25 Things Psychology Tells You About Yourself. Intuition. How Our Minds Mislead Us: The Marvels and Flaws of Our Intuition. How we (should) decide. 5 Scientific Reasons Your Idea of Happiness Is Wrong. Maslow 2.0: A New and Improved Recipe for Happiness - Hans Villarica - Life. Philosophy and Psychology. An Antidote to the Age of Anxiety: Alan Watts on Happiness and How to Live with Presence. The 21 Emotional Stages Of Shopping At Ikea, From Optimism To Total Defeat.

Related:  Philosophy   -  Fear Of Missing Out   -  Sciences- Interdisciplinarite   -  Psycho   -  Articles to Read   -  Internet addiction disorder   -  Cold reading   -  An Antidote to the Age of Anxiety: Alan Watts on Happiness and How to Live with Presence   -  Education   -  Enterprise