I listened to 75 self-help podcasts in 10 days. This is how much they helped. Podcasts were guys talking about tech, then along came Serial. 'Lore', 'My Brother, My Brother, and Me': What's the Deal with All These Podcast Adaptations? When Aaron Mahnke started making “Lore,” his podcast about famous myths and urban legends, he only wanted to tell interesting stories and experiment with using audio to tell them. 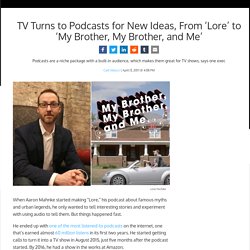 But things happened fast. He ended up with one of the most listened-to podcasts on the internet, one that’s earned almost 60 million listens in its first two years. He started getting calls to turn it into a TV show in August 2015, just five months after the podcast started. Nancy: an emotional LGBTQ podcast that takes in comings out and goings on. Best friends Kathy Tu and Tobin Low have just launched Nancy (WNYC Studios/iTunes), a podcast which they jokingly threatened to call Gay-diolab. 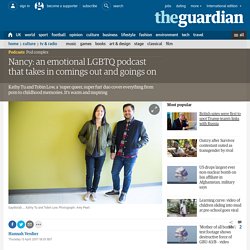 “This is not going to be Will and Grace: the Podcast,” warns Low, “No shade to you, Debra Messing, but there’s a time and a place.” The duo describe themselves as “super queer, super fun” and that’s pretty accurate. 2017/01 [Bello] Can I Have That in Print? – Bello Collective. Although podcasting is an audio medium, the written word does creep in. 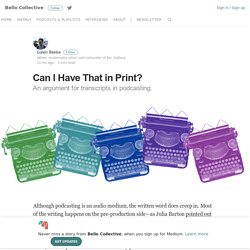 Most of the writing happens on the pre-production side—as Julia Barton pointed out in her takedown of the mic pic, nobody on the story-based, chart-topping shows “is just gabbing off the cuff into a microphone”—but there’s also an important post-production piece of writing: the transcript. Though few podcasts provide them, transcripts are a vital tool for many podcast listeners. As audio stories move from radio-based (and screen-lacking) to computer-based (and screen-having), opportunities arise to create multimedia presentations that benefit a range of listeners. 2016/11 [Bello] 13 Podcasts of Pure Joy and Delight For Uncertain Times. The Big Listen #10. 2016/06 [] CANADALAND and the CBC: Podcasts from the Great White North – Podcast Broadcast. 2016/01 [USA Today] Student podcasts on the rise as talk becomes the Next Big Thing.

A recording of “The Empty Bottle Chronicles” podcast, a student-produced podcast at Indiana University. 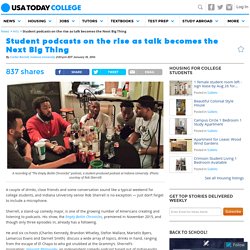 (Photo courtesy of Rob Sherrell) A couple of drinks, close friends and some conversation sound like a typical weekend for college students, and Indiana University senior Rob Sherrell is no exception — just don’t forget to include a microphone. 2015/09 Torchwood: The Conspiracy Big Finish audio drama summary. After 5 years away from the world Doctor Who spin-off Torchwood is back, with the first audio drama based on the series now available for download. 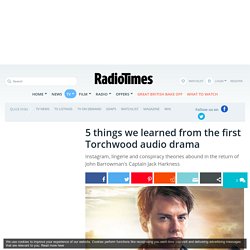 Starring John Barrowman and John Sessions, new story The Conspiracy is the first of 6 dramas to bring the team back to the Whoniverse, with other cast returning for later episodes. The Spoken History of a Global Language. ★[Podcastastic] Random Redheaded Ramblings. Title: Welcome to Night Vale Author: Joseph Fink and Jeffrey Cranor Publisher: Orbit Release Date: 20th October 2015 Source: Publisher ARC If you are a regular reader to the blog you may have noticed my wittering about the Welcome to Night Vale podcast of late, I have been binge listening to the podcasts every night on my half hour drive home and they are totally amazing, they appeal to my crazy side. 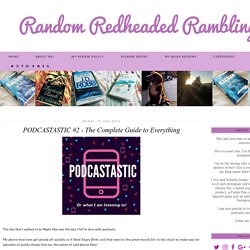 ★[Podcast] Random Nerdery. I'm a huge fan of Patrick Rothfuss' Kingkiller Chronicle books, so I was excited to find out that he'd been working on a podcast. 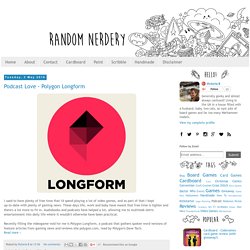 The episodes of 'Untitled' are basically weekly chats between author Patrick Rothfuss and his friend Max Temkin, creator of the awesome (but NSFW!) Cards Against Humanity game. I think the idea was for the audience to suggest names to replace 'Untitled', but at time of writing I've listened all the way up to the seventh (latest) episode and they still haven't picked anything! 2016/08 [Bello]18 Episodes About Gender Transitions #LGBT. Here are eighteen great episodes from the past fifteen years about people who transition from one gender to another—socially, physically, and legally. 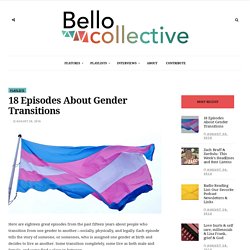 Each episode tells the story of someone, or someones, who is assigned one gender at birth and decides to live as another. 2016/08 [Bello] Lessons of History, in 10 Podcast Episodes – Bello Collective. History gets a bad reputation in school as a boring subject. 2015/07 [] The 7 Most Moving Podcast Episodes Ever Created. Ironically, the new golden age of radio isn’t just playing out over the airwaves. 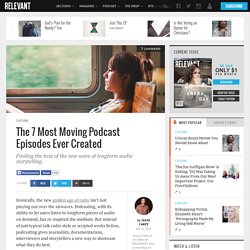 Podcasting, with its ability to let users listen to longform pieces of audio on demand, has re-inspired the medium. But instead of just typical talk radio style or scripted works fiction, podcasting gives journalists, documentarians, interviewers and storytellers a new way to showcase what they do best. We’ve compiled a list of seven individual podcast episodes from a variety of series that are some of the most moving shows ever created. 2014/12 [Slate] The 25 Best podcast episodes ever. Photo illustration by Slate. 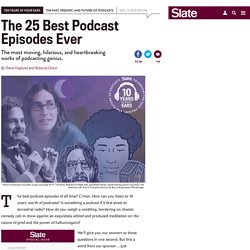