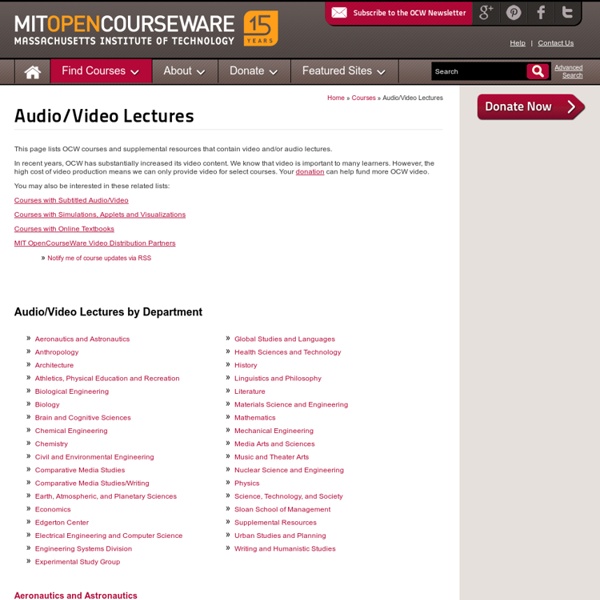 The Ultimate Guide to #Podcasting 593 Flares Twitter 373 Facebook 51 Google+ 51 StumbleUpon 1 Pin It Share 0 LinkedIn 52 inShare52 Email 0 Email to a friend Buffer 65 593 Flares × Podcasts are becoming increasingly popular and with good reason too: they are a great way of reaching and engaging with your audience. 12 Dozen Places To Educate Yourself Online For Free All education is self-education. Period. It doesn’t matter if you’re sitting in a college classroom or a coffee shop. We don’t learn anything we don’t want to learn. Those people who take the time and initiative to pursue knowledge on their own are the only ones who earn a real education in this world. Take a look at any widely acclaimed scholar, entrepreneur or historical figure you can think of.

UC Irvine Open Courseware Water is the economic, social, and physical lifeblood of humanity, providing the bases for agriculture, industry, transportation, energy production, and life itself. Despite its importance, alarming signs suggest that there are looming threats to this vital resource. The World Resources Institute contends that the world's thirst for water is likely to become one of the most pressing issues this century due to population growth, drought, and climate change. The World Bank reports that many developing nations already face a crisis from intensive irrigation, urbanization, diminishing supplies, and deteriorating infrastructure; and, UNESCO predicts as many as 7 billion people in half the world’s countries will face shortages of potable water by 2050.

Feast Your Eyes on This Beautiful Linguistic Family Tree 552K 18.4KShare337 When linguists talk about the historical relationship between languages, they use a tree metaphor. An ancient source (say, Indo-European) has various branches (e.g., Romance, Germanic), which themselves have branches (West Germanic, North Germanic), which feed into specific languages (Swedish, Danish, Norwegian).

Subtitle Edit Overview Subtitle Edit is a free (open source) editor for video subtitles - a subtitle editor :) With SE you can easily adjust a subtitle if it is out of sync with the video in several different ways. You can also use SE for making new subtitles from scratch (do use the time-line/waveform/spectrogram) or translating subtitles. For a list of features see below or check out the Subtitle Edit Help page. The 37 Best Websites To Learn Something New — Life Learning Forget overpriced schools, long days in a crowded classroom, and pitifully poor results. These websites and apps cover myriads of science, art, and technology topics. They will teach you practically anything, from making hummus to building apps in node.js, most of them for free. There is absolutely no excuse for you not to master a new skill, expand your knowledge, or eventually boost your career. You can learn interactively at your own pace and in the comfort of your own home. It’s hard to imagine how much easier it can possibly be.

8 great apps for listening to podcasts on Android and iOS - TNW Apps Podcasts are a great way of staying up to date with your favourite topics and expanding your mind by listening to new points of view or discovering new music. Your phone is the perfect device for listening to podcasts on the go, but a good app to keep track of, and play, your downloads is essential. Here we take a look at some of the best choices on Android and iOS. iTunes Free, Windows and OS X, syncs to iPhone (and Android, unofficially)

Walt Disney's 1943 Propaganda Film Shows How Fascists Are Made During World War II, Walt Disney entered into a contract with the US government to develop 32 animated shorts. Nearly bankrupted by Fantasia (1940), Disney needed to refill its coffers, and making American propaganda films didn’t seem like a bad way to do it. On numerous occasions, Donald Duck was called upon to deliver moral messages to domestic audiences (see The Spirit of ’43 and Der Fuehrer’s Face). But that wasn’t the case with Education for Death: The Making of Nazi, a film shown in U.S. movie theaters in 1943. Forget Google Listen: 10 Great Podcasting Apps It’s a competitive, dog-eat-dog world out there and, with Google products, very much about survival of the fittest. The search giant has often been quick to put a failing service out to pasture, even ones they put a great deal of effort into promoting; Google Buzz and Google Wave are both recent examples. In a recent cull, the Google Listen app has now cast its very last pod. While its demise doesn’t quite warrant the need for a support helpline to get users over their loss, here at Android.AppStorm we thought we might step in to help, kind of like a friendly shoulder to cry on.

Educational Podcasting, Educational Vodcasting What is Classroom Podcasting/Vodcasting Podcasting is online audio content made available through the Internet using a subscription "feed". Vodcasting (video-on-demand casting) is the same principle as Podcasting with the addition of video.