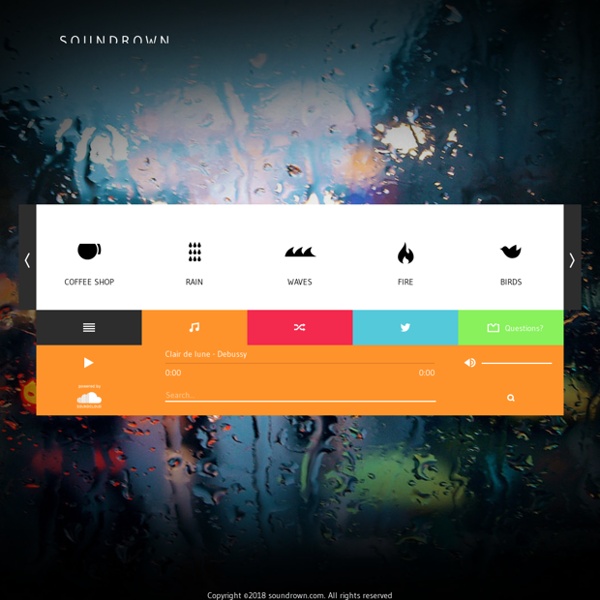 If Zeppelin did steal “Stairway”: “It would be like finding out the Beatles didn’t write ‘Sgt. Pepper’” Is Led Zeppelin’s “Stairway to Heaven” plagiarized from an obscure instrumental by the band Spirit? A court in Los Angeles is trying to work that out this week, with testimony by Zeppelin guitarist Jimmy Page as well as Spirit’s Jay Ferguson and Mark Andes. The trial will turn on legal definitions and precedents, which include cases involving songs by George Harrison and Robin Thicke. But the trial impact will be in the world of music, and it could be substantial. To put the trial in context, Salon tracked down veteran music journalist Ira Robbins, who ran the Trouser Press magazine and its books on alternative rock ‘n’ roll.

Study Determines This Is the Most Relaxing Song Ever Looking for something to help you relax before bed that doesn't involve popping a pill? You might want to load up your iPod with a song by Manchester band Marconi Union. Sound therapists were able to rate ten of the most relaxing songs, with Marconi Union's 8 minute trance-inducing tune, "Weightless", coming out on top thanks to its continuous rhythm of 60 BPM, an ideal tempo for synchronization with the heart and brainwaves, making it an ideal audio accompaniment for a good night's rest. 18 Famous Literary First Lines Perfectly Paired With Rap Lyrics Are you an aspiring rap lyricist? Have I got the tool for you! RapPad is a site where you can compose your raps with the help of rhyme lookups, syllable counters, and a library of beats. It also puts you in touch with a community for discussion, feedback, and online rap battles. But even if you’re not planning on writing raps, it offers a unique kind of linguistic fun.

Blog  My Times column of 30 December 2013: It was only five years ago that “Anglo-Saxon” economics was discredited and finished. Continental or Chinese capitalism, dirigiste and heavily regulated, was the future. Yet here’s the Centre for Economics and Business Research last week saying that Britain is on course to remain the sixth or seventh biggest economy until 2028, by when it is poised to pass Germany, mainly for demographic reasons. Three others of the top ten will be its former colonies: the US, India and Canada. 7 Songs That Led Zeppelin Ripped Off : Exclusives When it was revealed yesterday that Led Zeppelin was being sued by the band Spirit for stealing the famous intro to "Stairway to Heaven" from its song "Taurus," it came as no real surprise to anyone familiar with the history of Led Zeppelin, who has been accused of plagiarism many times before. Here are seven examples of songs that Led Zeppelin ripped off from other artists. 1. "Dazed & Confused" (1969) Though Led Zeppelin often based its music around songs by American bluesmen, the band's first great song "Dazed & Confused" was actually taken from Jake Holmes, an American folk singer that Jimmy Page's previous band the Yardbirds played with in 1967.

Relaxing Snow - Sit back and relax with a snowy scene and relaxing music About Relaxing Snow is made by James Cooper a UK web designer and Christmas fan who runs www.whychristmas.com the biggest Christmas information site on the web. Photo California Education Code Section 35183 35183. (a) The Legislature finds and declares each of the following: (1) The children of this state have the right to an effective public school education. Both students and staff of the primary, elementary, junior and senior high school campuses have the constitutional right to be safe and secure in their persons at school. The Lawsuit Over Calling Someone 'Fucking Crazy' on Twitter Is Fucking Crazy Hey, those of you with poor Twitter judgment: It’s completely cool to call someone “fucking crazy” on Twitter, though you might have to go through the trouble of a legal battle with the person you accused, as one horse enthusiast in Kentucky just found out. The whole thing is a bit nutty, so bear with me here for a moment: Toxicology research scientist Mara Feld bought a horse named Munition for $1 a few years ago. Feld quickly learned that keeping a horse in Massachusetts is not a cheap proposition, and sold Munition to a person who eventually sent the horse to a slaughterhouse. Not a good look. The whole thing raised a bunch of eyebrows in online horse communities and eventually, in 2010, got to Crystal Conway, who works in the thoroughbred industry in Kentucky.

Anne Briggs Early life[edit] Briggs was born in Toton, Beeston, Nottinghamshire, on 29 September 1944.[1] Her mother died of tuberculosis when she was young. Her father, Albert, was severely injured in World War II and she was raised by her Aunt Hilda and Uncle Bill in Toton, who also brought up Hilda's youngest sister, Beryl, and their own daughter Betty. Five Reasons Why You Shouldn’t Self-Publish Let me be clear, I am a self-published author. I have no regrets, and I will continue to self-publish in the future, however, I strongly advise against taking this route. It takes a special kind of crazy to do this to yourself, so turn back now if you can. Awesome Interactive Chart Reveals Which Singer Has the Greatest Recorded Vocal Range of All-Time A new interactive chart created by Concert Hotels seeks to identify the “world’s greatest singers” by pinpointing various artists’ recorded vocal ranges. The chart shows the “highest and lowest notes each artist hit in the recording studio.” Based on the findings, Guns N’ Roses singer Axl Rose has demonstrated the greatest vocal range in studio. Mariah Carey comes in second, followed by Prince, Aerosmith’s Steven Tyler, James Brown, Marvin Gaye, Christina Aguilera and David Bowie. The interactive chart also lets you see who has hit the highest and lowest notes on their albums. Check it out and play around:

An Epic Chart of 162 Young Adult Retellings Presenting YA RETELLINGS – an epic infographic brought to you by Epic Reads. Read your way through this list of 162 young adult books that are all retellings or re-imaginings of popular classic literature, myths, fairy tales and Shakespearean plays. UPDATE (June 2016): We are planning on releasing an updated version of these infographics in winter 2017 with all the new YA retellings that have been published since we first created this infographic 2 years ago.