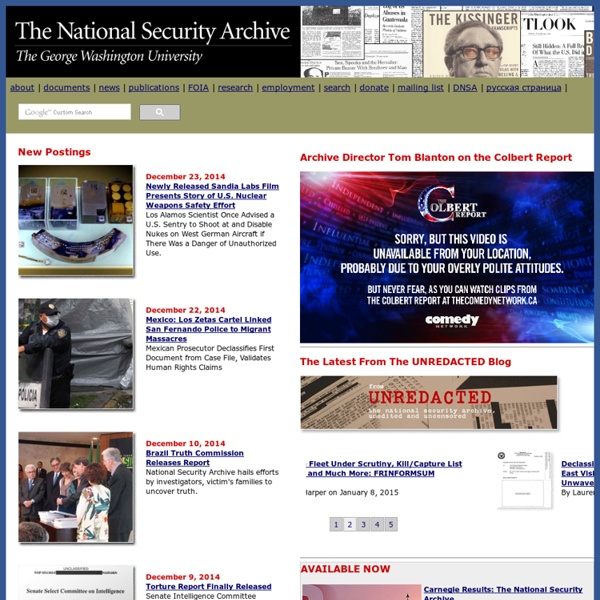 FBI The FBI’s Reading Room contains many files of public interest and historical value. In compliance with the National Archives and Records Administration (NARA) requirements, some of these records are no longer in the physical possession of the FBI, eliminating the FBI’s capability to re-review and/or re-process this material. Please note, that the information found in these files may no longer reflect the current beliefs, positions, opinions, or policies currently held by the FBI. The image quality contained within this site is subject to the condition of the original documents and original scanning efforts. These older files may contain processing procedures that are not compliant with current FOIA processing standards. All recently scanned images posted to the Reading Room adhere to the NARA 300 DPI standard. Some material contained in this site may contain actions, words, or images of a graphic nature that may be offensive and/or emotionally disturbing.

Former U.S. Ambassador: Behind Crimea Crisis, Russia Responding to Years of "Hostile" U.S. Policy This is a rush transcript. Copy may not be in its final form. JUAN GONZÁLEZ: The Ukrainian government has announced plans to abandon its military bases in Crimea and evacuate its forces following Russia’s decision to annex the region. YURIY SERGEYEV: The declaration of independence by the Crimean Republic is a direct consequence of the application of the use of force and threats against Ukraine by the Russian Federation, and, in view of Russian nuclear power status, has a particularly dangerous character for Ukraine’s independence and territorial integrity, as well as for international peace and security in general. JUAN GONZÁLEZ: Russia’s ambassador to the United Nations, Vitaly Churkin, defended Moscow’s move to annex Crimea. AMY GOODMAN: Meanwhile, on Wednesday, the U.S. PRESIDENT BARACK OBAMA: We are not going to be getting into a military excursion in Ukraine. AMY GOODMAN: To talk more about the growing crisis in Ukraine, we’re joined by Ambassador Jack Matlock.

Cryptome Wilson Center Digital Archive How to Write a Bill Once you've found an interesting and relevant topic on which to write your bill and have done the necessary research, the next step is actually getting your bill ready for discussion in committee. A PMC bill should have three parts: Preamble: This section should provide your reasons for the necessity of your bill. Why is your topic something that should be addressed by the government? As an additional aid, we are providing two sample bills that incorporate all the necessary parts of a PMC bill: Sample Bill #1: The Freedom of Marriage Act [ DOC | PDF ] Sample Bill #2: The Freedom to Farm Bill [ DOC | PDF ] We are providing a bill template that we highly recommend you use.

"Carl Schmitt and the Question of the Aesthetic" by Neil Levi US Government Printing Office - FDsys - Home Valley of the other kings: Lost dynasty found in Egypt - News - Archaeology Excavations at Abydos, 70 miles north-west of Egypt's famous Valley of the Kings, have revealed the existence of an entire royal cemetery, now believed to be the final resting place of up to 16 mysterious pharaohs - an entire dynasty whose existence was up till now virtually unknown to the Egyptological world. Bizarrely more than a century ago, in 1901-1902, a British team, led by the famous Egyptologist, Flinders Petrie, entered four of the tombs - but had no idea as to who they belonged to or even of their high-status. Ironically, the vital inscription revealing the existence of the lost kingdom and indicating the cemetery's royal status, was in a tomb buried deep under the desert sand less than 20 metres from where they were digging. But there was no proof until the last few weeks when a team of American Egyptologists discovered a previously unknown tomb buried under three metres of sand.