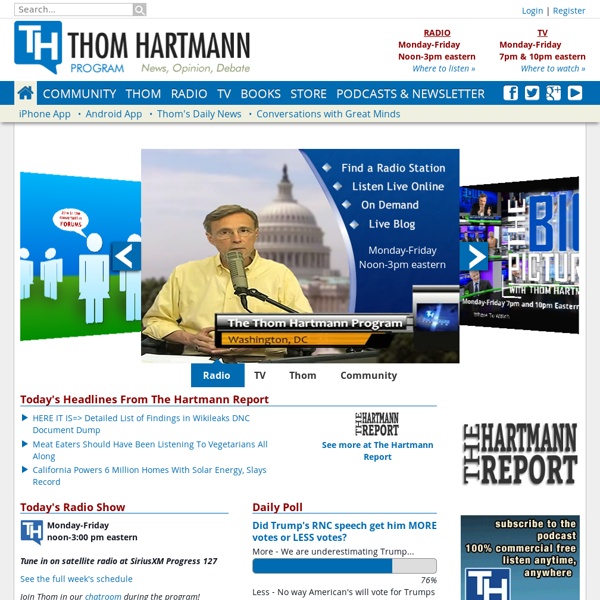 The BRAD BLOG Free Speech Radio News TomDispatch Pacifica.org - Home LAmyths open source sociology Robert Reich I Don't Know — ...what time it is. (May 27, 2014) How We All Miss the Point on School Shootings In 1998, a high school junior named Eric Harris from Colorado wanted to put on a performance, something for the world to remember him by. A little more than a year later, Eric and his best friend Dylan Klebold would place bombs all over their school — bombs large enough to collapse large chunks of the building and to kill the majority of the 2,000 students inside — and then wait outside with semi-automatic weapons to gun down any survivors before ending their own lives. “It’ll be like the LA riots, the Oklahoma bombing, WWII, Vietnam, Duke and Doom all mixed together,” Eric wrote in his journal. “Maybe we will even start a little rebellion or revolution to fuck things up as much as we can. Eric was a psychopath, but he was also smart. Despite what media outlets would later claim, Eric Harris was not the victim of bullying any more than other students, he was not a goth or a member of the “Trench Coat Mafia.” But Eric also understood people. Reality Check There are a few reasons for this:

Public Intelligence Blog Michael Parenti Blog  INFORMATION CLEARING HOUSE. NEWS, COMMENTARY & INSIGHT Interaction Institute for Social Change Blog The structural vs. transformational debate is alive and well. I’m glad that Curtis and Cynthia have been dipping back into it over the last few weeks. It is good to start at the end: the answer is a both/and, it’s not a good idea to get stuck in binaries. The print pictured above captures it for me. Take that in for a second. Thirty years in jail for daring to stand up for freedom. The print’s beauty is undeniable. How is this perspective possible? There was something in Mandela’s mind, something in his soul, that could not be subjugated. Nelson Mandela is the icon that destroys the binary. I agree with Curtis and Glanzberg that “The pattern most in need of shifting is not out there in the world, but in our minds.” But there is something else happening here. We have an interior condition. Bringing our care and attention to what is inside.