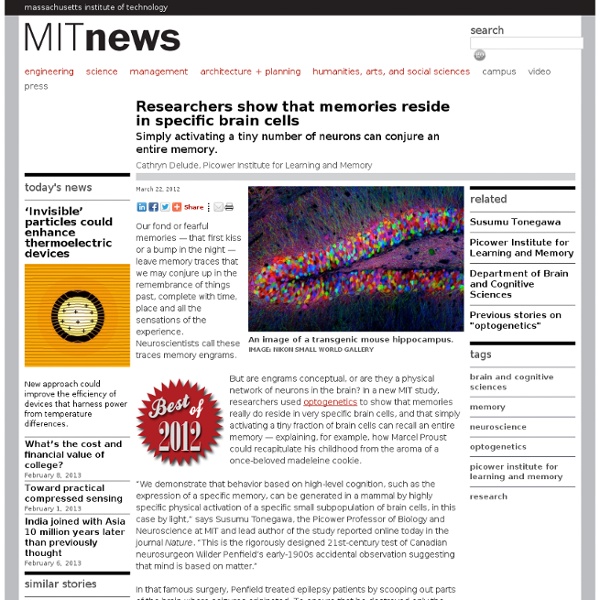 Our fond or fearful memories — that first kiss or a bump in the night — leave memory traces that we may conjure up in the remembrance of things past, complete with time, place and all the sensations of the experience. Neuroscientists call these traces memory engrams. But are engrams conceptual, or are they a physical network of neurons in the brain? In a new MIT study, researchers used optogenetics to show that memories really do reside in very specific brain cells, and that simply activating a tiny fraction of brain cells can recall an entire memory — explaining, for example, how Marcel Proust could recapitulate his childhood from the aroma of a once-beloved madeleine cookie. In that famous surgery, Penfield treated epilepsy patients by scooping out parts of the brain where seizures originated. Fast forward to the introduction, seven years ago, of optogenetics, which can stimulate neurons that are genetically modified to express light-activated proteins. False memory Related:  Neuroscience • The Brain

Neurogenesis Neurogenesis (birth of neurons) is the process by which neurons are generated from neural stem cells and progenitor cells. Most active during pre-natal development, neurogenesis is responsible for populating the growing brain with neurons. Recently neurogenesis was shown to continue in several small parts of the brain of mammals: the hippocampus and the subventricular zone. Studies have indicated that the hormone testosterone in vertebrates, and the prohormone ecdysone in insects, have an influence on the rate of neurogenesis.[citation needed] Occurrence in adults[edit] New neurons are continually born throughout adulthood in predominantly two regions of the brain: Many of the newborn cells die shortly after they are born, but a number of them become functionally integrated into the surrounding brain tissue. Role in learning[edit] Effects of stress[edit] Some studies have hypothesized that learning and memory are linked to depression, and that neurogenesis may promote neuroplasticity.

The First Real Reason We Need To Sleep We know we need to sleep. We know our brains and bodies work better after sleep. But what we didn't know, until now, was why. Scientists have just reported the first major mechanical reason our brains need to sleep — certain cleaning mechanisms in the brain work better when we shut the brain down. "This study shows that the brain has different functional states when asleep and when awake," study researcher Maiken Nedergaard, of the University of Rochester said in a statement. We've known that our brains consolidate memories during sleep and perform other important functions. We know that sleep has all of these benefits, but until now we didn't know any of the specific changes that bring about these sleep benefits. Charles Czeisler, a sleep researcher at Harvard Medical School in Boston, told Science Magazine's Emily Underwood that this is the "ﬁrst direct experimental evidence at the molecular level" for why we need to sleep. The paper was published in the journal Science on Oct. 17. J.

Eidetic memory Overview[edit] The ability to recall images in great detail for several minutes is found in early childhood (between 2% and 10% of that age group) and is unconnected with the person's intelligence level.[citation needed] Like other memories, they are often subject to unintended alterations. The ability usually begins to fade after the age of six years, perhaps as growing vocal skills alter the memory process.[2][3] A few adults have had phenomenal memories (not necessarily of images), but their abilities are also unconnected with their intelligence levels and tend to be highly specialized. In extreme cases, like those of Solomon Shereshevsky and Kim Peek, memory skills can actually hinder social skills.[4] Persons identified as having a related condition known as Highly Superior Autobiographical Memory (HSAM)[1] are able to remember very intricate details of their own personal life, but this ability seems not to extend to other, non-autobiographical information. Skeptical views[edit]

How The Brain Processes The #Emotions — P... This Nifty Infographic is a Great Introduction to Neuroplasticity and Cognitive Therapy It's startling to think about how we've got a spaceship billions of miles away rendezvousing with Pluto, yet here on Earth there are major aspects of our own anatomy that we're almost completely ignorant about. We've climbed Everest, sent men to the moon, and invented the Internet — but we still don't know how our brains work. The positive outlook is that many health, science, and research specialists believe we're on the precipice of some major neuroscientific breakthroughs. One example of a recent discovery with major implications is our further understanding of neuroplasticity. Below, broken up into two parts, is a terrific infographic detailing the essence of what we know about neuroplasticity and how it works. Want a high-res, unedited version of the image above? (h/t @DaniMansfield) Want to learn more about neuroplasticity? Top photo credit: Jezper / Shutterstock

11 Simple Ways to Improve Your Memory Whether you want to be a Jeopardy! champion or just need to remember where you parked your car, here are 11 things you can do right now to turn your mind from a sieve into a steel trap. These days we’re all about things being faster. That’s why this advice is invaluable: When you really need to remember something, concentrate on it for at least 8 seconds. That can seem like a long time when you're running around trying to get a million things done, but it is worth it. Studies have shown that 8 seconds is the minimum amount of time it takes for a piece of information to go from your short-term memory to your long-term memory. We’ve all walked into a room and suddenly realized we can’t remember why we needed to be there in the first place. If you’re having trouble remembering things at work, get a stress ball. At this point we should just accept it that science considers exercise the cure for absolutely any problem, and memory is no different. We’re all font snobs to some extent.

Know Your Neurons: How to Classify Different Types of Neurons in the Brain’s Forest | Brainwaves Previously, on Know Your Neurons:Chapter 1: The Discovery and Naming of the Neuron Chapter 2: How to Classify Different Types of Neurons, or The Dendrology of the Neuron Forest Scientists have organized the cells that make up the nervous system into two broad groups: neurons, which are the primary signaling cells, and glia, which support neurons in various ways. The human brain contains around 100 billion neurons and, by most estimates, somewhere between 10 to 50 times as many glial cells. All these cells are packed into a three-pound organ about the size of both your fists stuck together. You can think of your brain as a dense forest—the neuron forest—in which different kinds of trees grow near, around and on top of one another, their branches and roots intertwining. Different Types of Neurons (click to enlarge). A model neuron. Before exploring the brain’s cellular diversity, let’s look at a model neuron. Neurons classified by structure. Neurons classified by function. References

Cooperative Neural Networks Suggest How Intelligence Evolved Working together can hasten brain evolution, according to a new computer simulation. When programmed to navigate challenging cooperative tasks, the artificial neural networks set up by scientists to serve as mini-brains "learned" to work together, evolving the virtual equivalent of boosted brainpower over generations. The findings support a long-held theory that social interactions may have triggered brain evolution in human ancestors. "It is the transition to a cooperative group that can lead to maximum selection for intelligence," said study researcher Luke McNally, a doctoral candidate at Trinity College Dublin. Greater intelligence, in turn, leads to more sophisticated cooperation, McNally told LiveScience. [10 Fun Brain Facts] It also leads to more sophisticated means of cheating, he added. Virtual neurons McNally and his colleagues used artificial neural networks as virtual guinea pigs to test the social theory of brain evolution.