First map of the human brain reveals a simple, grid-like structure between neurons 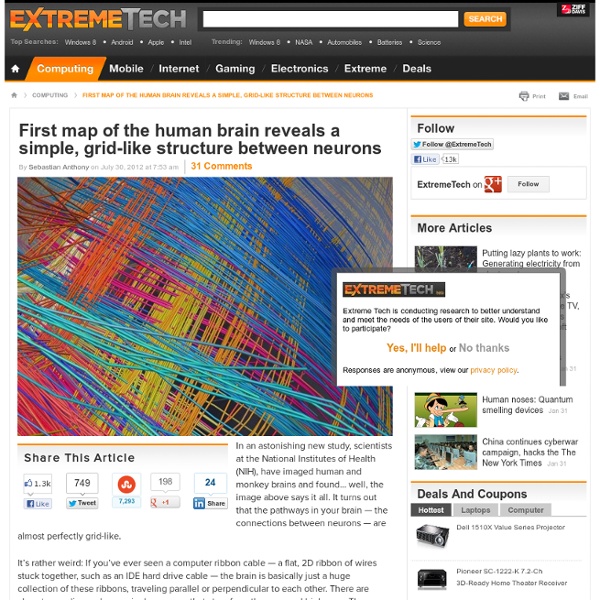 In an astonishing new study, scientists at the National Institutes of Health (NIH), have imaged human and monkey brains and found… well, the image above says it all. It turns out that the pathways in your brain — the connections between neurons — are almost perfectly grid-like. It’s rather weird: If you’ve ever seen a computer ribbon cable — a flat, 2D ribbon of wires stuck together, such as an IDE hard drive cable — the brain is basically just a huge collection of these ribbons, traveling parallel or perpendicular to each other. There are almost zero diagonals, nor single neurons that stray from the neuronal highways. This new imagery comes from a souped-up MRI scanner that uses diffusion spectrum imaging to detect the movement of water molecules within axons (the long connections made by neurons). “Before, we had just driving directions. Curiously, it seems like this network of highways and byways is laid out when we’re still an early fetus. Read more at NIH Related:  Neuroscience

The Connectome — Harvard School of Engineering and Applied Sciences Lead investigators Hanspeter Pfister (SEAS ), Jeff Lichtman (FAS/Molecular & Cellular Biology, Center for Brain Science) and Clay Reid (HMS/Neurobiology, Center for Brain Science) Description The overall goal of the Connectome project is to map, store, analyze and visualize the actual neural circuitry of the peripheral and central nervous systems in experimental organisms, based on a very large number of images from high-resolution microscopy.

Simple mathematical pattern describes shape of neuron ‘jungle’ Neuron shape model: target points (red) distributed in a spherical volume and connected to optimize wiring in a tree (black) (credit: H. Cuntz et al./PNAS) University College London (UCL) neuroscientists have found that there is a simple pattern that describes the tree-like shape of all neurons. Neurons look remarkably like trees, and connect to other cells with many branches that effectively act like wires in an electrical circuit, carrying impulses that represent sensation, emotion, thought and action. Over 100 years ago, Santiago Ramon y Cajal, the father of modern neuroscience, sought to systematically describe the shapes of neurons, and was convinced that there must be a unifying principle underlying their diversity. Cajal proposed that neurons spread out their branches so as to use as little wiring as possible to reach other cells in the network. New work by UCL neuroscientists has revisited this century-old hypothesis using modern computational methods.

Connectomics Connectomics is the production and study of connectomes: comprehensive maps of connections within an organism's nervous system, typically its brain or eye. Because these structures are extremely complex, methods within this field use a high-throughput application of neural imaging and histological techniques in order to increase the speed, efficiency, and resolution of maps of the multitude of neural connections in a nervous system. While the principal focus of such a project is the brain, any neural connections could theoretically be mapped by connectomics, including, for example, neuromuscular junctions. Tools[edit] Model Systems[edit] Aside from the human brain, some of the model systems used for connectomics research are the mouse,[3] the fruit fly,[4] the nematode C. elegans,[5][6] and the barn owl.[7] Applications[edit] Criticism[edit] Comparison to genomics[edit] See also[edit] References[edit] Further reading[edit] External links[edit]

The Human Connectome Project The Human Connectome Project Human Connectome The NIH Human Connectome Project is an ambitious effort to map the neural pathways that underlie human brain function. Altogether, the Human Connectome Project will lead to major advances in our understanding of what makes us uniquely human and will set the stage for future studies of abnormal brain circuits in many neurological and psychiatric disorders. Consortia The Blueprint has funded two major cooperative agreements that will take complementary approaches to deciphering the brain's complex wiring diagram. Use the box at the right to search the consortium sites or browse the sites directly using the links below. Latest Updates The Massachusetts General Hospital and the University of California at Los Angeles consortium has built a next-generation 3T magnetic resonance imaging (MRI) scanner that improves the quality and spatial resolution with which brain connectivity data can be acquired. Washington University in St.

home Neurogenesis Neurogenesis (birth of neurons) is the process by which neurons are generated from neural stem cells and progenitor cells. Most active during pre-natal development, neurogenesis is responsible for populating the growing brain with neurons. Recently neurogenesis was shown to continue in several small parts of the brain of mammals: the hippocampus and the subventricular zone. Occurrence in adults[edit] New neurons are continually born throughout adulthood in predominantly two regions of the brain: Many of the newborn cells die shortly after they are born, but a number of them become functionally integrated into the surrounding brain tissue. Role in learning[edit] Effects of stress[edit] Some studies have hypothesized that learning and memory are linked to depression, and that neurogenesis may promote neuroplasticity. Effects of sleep reduction[edit] One study has linked lack of sleep to a reduction in rodent hippocampal neurogenesis. Possible use in treating Parkinson's disease[edit]

IBM scientists create most comprehensive map of the brain’s network "The Mandala of the Mind": The long-distance network of the Macaque monkey brain, spanning the cortex, thalamus, and basal ganglia, showing 6,602 long-distance connections between 383 brain regions. (PNAS) The Proceedings of the National Academy of Sciences (PNAS) published Tuesday a landmark paper entitled “Network architecture of the long-distance pathways in the macaque brain” (an open-access paper) by Dharmendra S. Modha (IBM Almaden) and Raghavendra Singh (IBM Research-India) with major implications for reverse-engineering the brain and developing a network of cognitive-computing chips. “We have successfully uncovered and mapped the most comprehensive long-distance network of the Macaque monkey brain, which is essential for understanding the brain’s behavior, complexity, dynamics and computation,” Dr. “We studied four times the number of brain regions and have compiled nearly three times the number of connections when compared to the largest previous endeavor,” he pointed out. Dr.

Brain is not fully mature until 30s and 40s (PhysOrg.com) -- New research from the UK shows the brain continues to develop after childhood and puberty, and is not fully developed until people are well into their 30s and 40s. The findings contradict current theories that the brain matures much earlier. Professor Sarah-Jayne Blakemore, a neuroscientist with the Institute of Cognitive Neuroscience at University College London, said until around a decade ago many scientists had "pretty much assumed that the human brain stopped developing in early childhood," but recent research has found that many regions of the brain continue to develop for a long time afterwards. The prefrontal cortex is the region at the front of the brain just behind the forehead, and is an area of the brain that undergoes the longest period of development. Prof. Blakemore said brain scans show the prefrontal cortex continues to change shape as people reach their 30s and up to their late 40s. Explore further: Study: Our brains compensate for aging

The Brain CONNECT Project How The Brain Rewires Itself It was a fairly modest experiment, as these things go, with volunteers trooping into the lab at Harvard Medical School to learn and practice a little five-finger piano exercise. Neuroscientist Alvaro Pascual-Leone instructed the members of one group to play as fluidly as they could, trying to keep to the metronome's 60 beats per minute. Every day for five days, the volunteers practiced for two hours. Then they took a test. At the end of each day's practice session, they sat beneath a coil of wire that sent a brief magnetic pulse into the motor cortex of their brain, located in a strip running from the crown of the head toward each ear. The finding was in line with a growing number of discoveries at the time showing that greater use of a particular muscle causes the brain to devote more cortical real estate to it. "Mental practice resulted in a similar reorganization" of the brain, Pascual-Leone later wrote.

Sequencing the Connectome Converting connectivity into a sequencing problem can be broken down conceptually into three components. (A) Label each neuron with a unique sequence of nucleotides — a DNA “barcode.” (B) Associate barcodes from synaptically connected neurons with one another, so that each neuron can be thought of as a “bag of barcodes” — copies of its own “host” barcode and copies of “invader” barcodes from synaptic partners. A team of neuroscientists led by Professor Anthony Zador, Ph.D., of Cold Spring Harbor Laboratory have proposed a revolutionary new way to create a connectivity map (“connectome”) of the whole brain of the mouse at the resolution of single neurons: high-throughput DNA sequencing. The only current method for obtaining the connectome with high precision relies on laboriously examining individual cell-to-cell contacts (synapses) in electron microscopes, which is slow, expensive and labor-intensive. Barcoding synapses How BOINC would work