Know Your Neurons: How to Classify Different Types of Neurons in the Brain’s Forest 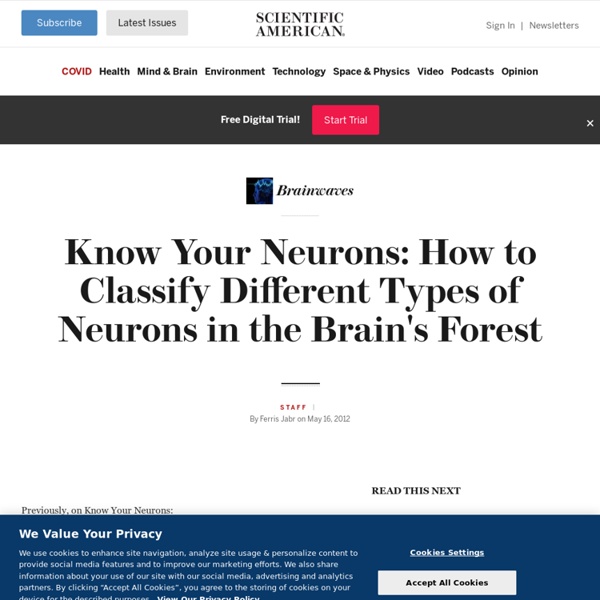 Previously, on Know Your Neurons:Chapter 1: The Discovery and Naming of the Neuron Chapter 2: How to Classify Different Types of Neurons, or The Dendrology of the Neuron Forest Scientists have organized the cells that make up the nervous system into two broad groups: neurons, which are the primary signaling cells, and glia, which support neurons in various ways. All these cells are packed into a three-pound organ about the size of both your fists stuck together. Different Types of Neurons (click to enlarge). A model neuron. Before exploring the brain’s cellular diversity, let’s look at a model neuron. Neurons classified by structure. Scientists have classified neurons into four main groups based on differences in shape. Neurons classified by function. Researchers also categorize neurons by function. Do these basic classes account for all types of neurons? So how many different types of neurons have scientists named so far? And that’s just one region of the brain. References Costandi, M. Related:  Neuroscience

Cooperative Neural Networks Suggest How Intelligence Evolved Working together can hasten brain evolution, according to a new computer simulation. When programmed to navigate challenging cooperative tasks, the artificial neural networks set up by scientists to serve as mini-brains "learned" to work together, evolving the virtual equivalent of boosted brainpower over generations. The findings support a long-held theory that social interactions may have triggered brain evolution in human ancestors. "It is the transition to a cooperative group that can lead to maximum selection for intelligence," said study researcher Luke McNally, a doctoral candidate at Trinity College Dublin. It also leads to more sophisticated means of cheating, he added. Virtual neurons McNally and his colleagues used artificial neural networks as virtual guinea pigs to test the social theory of brain evolution. The neural networks are programmed to evolve, as well. In a second scenario, the snowdrift game, two partners have to work together to dig out of a snowdrift.

Weblog and Essays Let's Clear Up One Confusion About Bitcoin November 3, 2017 If bitcoin can be converted into fiat currencies at a lower transaction cost than the fiat-to-fiat conversions made by banks and credit card companies, it's a superior means of exchange. One of the most common comments I hear from bitcoin skeptics goes something like this:Bitcoin isn't real money until I can buy a cup of coffee with it. In other words, bitcoin fails the first of the two core tests of "money": that it is a means of exchange and a store of value. The confusion here is the same one that plagues the conventional understanding of the foreign exchange markets: people confuse exchange and convertibility, which are both flows, i.e. transactions. Here's an illustration of the difference. Let's say Hipster Coffee Bar accepts payment in bitcoin (BTC) for a cup of coffee. The Hipster Coffee Bar branch in Mexico converts the BTC into pesos, the branch in Thailand converts the BTC into baht, and so on around the world.

Hacking the Human Brain: The Next Domain of Warfare | Wired Opinion It’s been fashionable in military circles to talk about cyberspace as a “fifth domain” for warfare, along with land, space, air and sea. But there’s a sixth and arguably more important warfighting domain emerging: the human brain. This new battlespace is not just about influencing hearts and minds with people seeking information. It’s about involuntarily penetrating, shaping, and coercing the mind in the ultimate realization of Clausewitz’s definition of war: compelling an adversary to submit to one’s will. Chloe Diggins and Clint Arizmendi are research & analysis officers at the Australian army’s Land Warfare Studies Centre. Current BCI work ranges from researchers compiling and interfacing neural data such as in the Human Conectome Project to work by scientists hardening the human brain against rubber hose cryptanalysis to technologists connecting the brain to robotic systems. This new battlespace is not just about influencing hearts and minds.

A Neuroscientist's Quest to Reverse Engineer the Human Brain What makes us who we are? Where is our personal history recorded, or our hopes? What explains autism or schiziphrenia or remarkable genius? Cook: You argue in your book that neuroscience has a fundamental problem. Seung: Most people are familiar with the regional approach to neuroscience: divide the brain into regions such as the "left brain" and "frontal lobe," and figure out what each region does. An obvious solution is to understand a region by subdividing it into neurons, and figure out how the neurons work together to perform the region's function. Cook: What made you think that there is another way? Seung: The neuronal approach is finally gathering steam because of technological innovations, especially in genetics and imaging. Cook: What do you mean by the connectome? Seung: A connectome is a map of a neural network. Cook: Are there particular diseases which this research might help understand? Seung: In brain diseases like Alzheimer's and Parkinson's, neurons degenerate and die.

poliworld brain The Brain's Highways: Mapping the Last Frontier Frontiers are in short supply. No explorer will again catch that first glimpse of the Pacific Ocean with “wild surmise,” take the first steps on the moon, or arrive first at the Challenger deep – the remotest corners of the earth are now tourist attractions. Even in science, great mysteries have fallen – life itself has gone from being the subject of metaphysical speculation about vital substances to the biophysical understanding of cellular processes. Yet there is one largely unmapped continent, perhaps the most intriguing of them all, because it is the instrument of discovery itself: the human brain. However, if one scratches the surface, our knowledge of how the human brain is put together remains limited: not in some esoteric, complicated manner, but in the straightforward sense that we have simply no means to visualize entire neurons in the brain (and the brain, being a collection of neurons, therefore remains a shut book in important ways).

Audio: Public Talk#3 | Is There Security at All, Psychologically? If one may, let us think over together this question. That is, if you are willing, put aside your particular vanity, your particular prejudice, your own conclusions and let's think over this problem together. Which means you are not accepting what the speaker is saying, nor are you accepting your own conclusions because you have none, you have put them aside. So let us think this over very carefully, and this may be one of the factors, that human beings are so frightened. Why does the mind cling to a particular memory, to a particular experience, hold on to a belief which has lost all meaning, why? Let's talk it over together. Save as favorite J. Third Public Talk in Saanen July 1979 I've got a bad cold. Shall we go on with what we were talking about the day before yesterday? Either he is incapable of seeing the facts, or he likes to live in an illusion, in a make-belief which has nothing whatsoever to do with actuality: the actuality being what is taking place now. All right.

This Scientist Wants Tomorrow's Troops to Be Mutant-Powered | Danger Room Andrew Herr in Mongolia. Photo: via Andrew Herr Greater strength and endurance. Enhanced thinking. Better teamwork. New classes of genetic weaponry, able to subvert DNA. It’s warfare waged at the evolutionary level. Qualities that today must be honed by years of training and education could be installed in a relative instant by, say, an injection or a targeted burst of electricity to the brain. These modifications could give rise to new breeds of biologically enhanced troops possessing what one expert in the field calls “mutant powers.” But not if Andrew Herr can help it. A 29-year-old Georgetown-trained researcher with degrees in microbiology, health physics and national security, Herr is one a handful of specialists in the defense community preaching greater U.S. investment in biomods. Another word for that: revolutionary. Whether positive or negative, the impact of routine biomods could be huge. But it’s not clear how closely the government is listening.