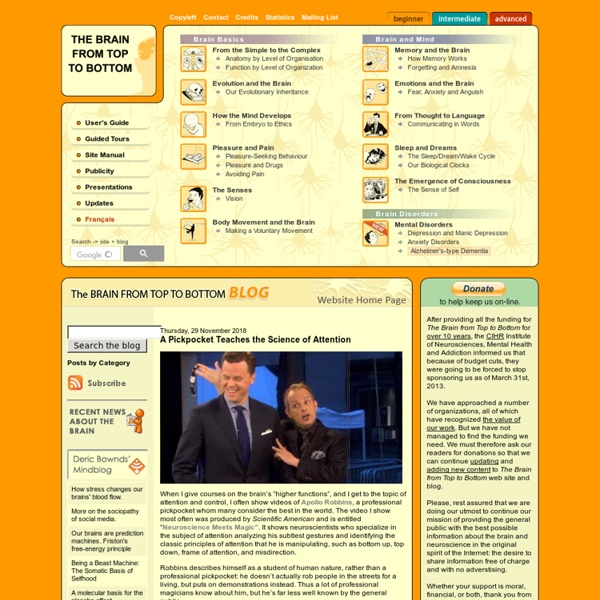 HOW TO – Make the “Brain machine” Best known for inventing TV-B-Gone, a keychain that turns off TVs in public places, Mitch Altman is interested in any technology that gives people more choices for improving their lives. You don’t have to be a Buddhist monk to meditate, or a Sleeping Beauty to sleep well. Achieve these altered states of consciousness, and others, with this simple microcontroller device.What would happen if you could play a recording of brain waves into someone’s brain? That question popped into my mind one day while I was meditating, and it turns out that there are devices that can do this.

Crimando's Skeleton Tutorials [ Crimando's HomePage | GateWay HomePage | Legal Disclaimer ] Last Modified: January, 2008 (J. Crimando). Skeleton Tutorials 15 Things You Didn’t Know About Your Brain No organ in your body is more fascinating than the brain. It does absolutely incredible things, and there’s much more to it than you think. RELATED: 18 Creepy Things You Didn’t Know You Could Do In Your Sleep 15.

Memory Overview of the forms and functions of memory in the sciences In psychology, memory is the process in which information is encoded, stored, and retrieved. Encoding allows information that is from the outside world to reach our senses in the forms of chemical and physical stimuli. In this first stage we must change the information so that we may put the memory into the encoding process. Leukemia Treatment Virtually Eradicates Cancer, Kills 'Pounds' Of Cancerous Cells A new leukemia treatment is wowing even the researchers behind its creation, providing results beyond their wildest expectations. It's virtually eradicated cancerous leukemia cells in the first three patients it's been tested on. In two of the first three patients the process was tested on the treatment completely destroyed the most common type of leukemia, according to MSNBC.

Interactives archive: Health AIDS in PerspectiveClick through six world maps, each of which tells a different, yet equally sobering story about the worldwide magnitude of AIDS, and those who are affected. Anatomy of ChildbirthReview the three stages of having a baby as well as some of the risks women face. Anatomy of a CigaretteTake a close look at a clickable conventional cigarette, and compare it to recent attempts to create a "safer" cigarette. Bacteria TalkIn this interview, Bassler describes the 600 species of bacteria on your teeth each morning, and much more.

Parent’s Welcome – WebMD Fit We’ve created three new children’s destinations with one goal in mind: to keep your kids healthy and happy! It’s customized for each member of the family: little kids, older children, teens, even a section just for parents. Get your family motivated and choose a site below! 30 Days of Change v4.0 30 Days of Change program is designed to change your exercise habits as well as the way you look and feel - in a month. It is completely 100% equipment free. Different daily programs will ensure that your body doesn’t adapt to the same routine so you’ll see progress a lot sooner than with any other program. Preview Download 30 Days of Change.pdf [9Mb]

The Split Brain Experiments Lists of Nobel Prizes and Laureates The Split Brain Experiments Play the Split Brain Experiments About the game The split brain experiments revealed that the right and left hemisphere in the brain are good at different things. For instance, the right hemisphere is good at space perception tasks and music while the left is good at verbal and analytic tasks. 10 Exciting Apps To Enhance Physical Education The following is a guest article from Vanessa Burke. In her words: “Ever since I was knee-high, I’ve been incessantly talking and communicating with anyone who would even begin to listen to me. I guess not a lot has changed!” Feel free to encourage Vanessa to start using Twitter more by following her @BurkeVanessa. Want to have your work posted on Edudemic? It’s easy, fun, and a great way to get your articles seen by more than 150,000 unique visitors per month.

Can your mind sense future events? A very interesting research shows that human minds have the ability to sense future events approx 2 to 10 seconds before they occur. Researchers suspect that the subconscious minds sometimes know more than our conscious minds. It has been found that the conscious mind only controls the brain for about 5% of the time and the rest controlled by the subconscious mind. This study called “Predictive Physiological Anticipation Preceding Seemingly Unpredictable Stimuli: A Meta-Analysis” shows that your mind actually has an energetic reaction to the future before it happens and before you are even aware of it. This phenomenon is sometimes called ‘presentiment’, as in ‘sensing the future’. Some call the phenomenon ‘anomalous anticipatory activity’.