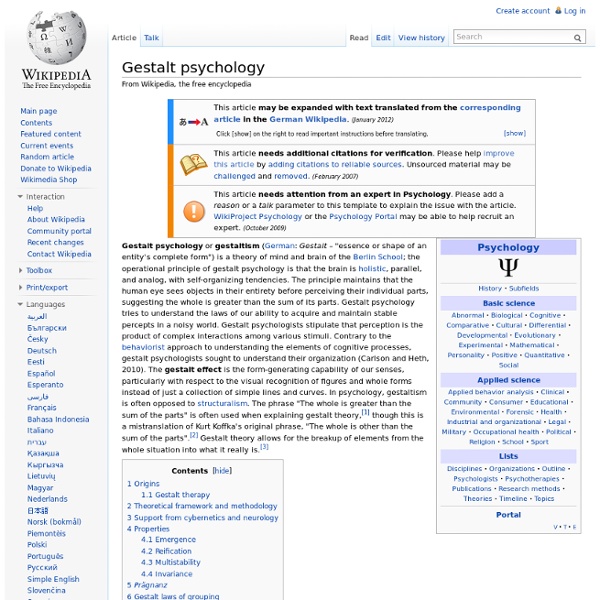 Gestalt psychology or gestaltism (German: Gestalt – "shape or form") is a theory of mind of the Berlin School. The central principle of gestalt psychology is that the mind forms a global whole with self-organizing tendencies. This principle maintains that the human mind considers objects in their entirety before, or in parallel with, perception of their individual parts; suggesting the whole is other than the sum of its parts. Gestalt psychology tries to understand the laws of our ability to acquire and maintain meaningful perceptions in an apparently chaotic world. In the domain of perception, Gestalt psychologists stipulate that perceptions are the products of complex interactions among various stimuli. Contrary to the behaviorist approach to understanding the elements of cognitive processes, gestalt psychologists sought to understand their organization (Carlson and Heth, 2010). Origins[edit] Gestalt therapy[edit] Theoretical framework and methodology[edit] Properties[edit] Reification

Discourse Representation Theory 1. Introduction This article concerns Discourse Representation Theory narrowly defined as work in the tradition descending from Kamp (1981). The same term is sometimes used more broadly, occasionally embracing Heim’s (1982) work and the developments initiated by Groenendijk and Stokhof (1989, 1991). However, the more common common label for the extended DRT family is “dynamic semantics”, and that is the term we will use, too. Two features that set DRT apart from other varieties of dynamic semantics is that it is representational and non-compositional.

Free Pattern Month Day 21 - Very Purple Person: Scalloped Hat Pattern Boy, do I have a great pattern for your next summer escapade. Please welcome the most adorable Novita from Very Purple Person and her Scalloped Hat Pattern. I found Novita's blog oh-so-long ago. Language and cognition Abstract What is the role of language in cognition? Do we think with words, or do we use words to communicate made-up decisions? LINGUIST List 32.2901: Calls: Ling & Literature/France LINGUIST List 32.2901 Sun Sep 12 2021 Calls: Ling & Literature/France Editor for this issue: Everett Green <everettlinguistlist.org> Why Chomsky was Wrong About Corpus Linguistics – corp.ling.stats Introduction When the entire premise of your methodology is publicly challenged by one of the most pre-eminent figures in an overarching discipline, it seems wise to have a defence. Noam Chomsky’s famous objection to corpus linguistics therefore needs a serious response. “One of the big insights of the scientific revolution, of modern science, at least since the seventeenth century… is that arrangement of data isn’t going to get you anywhere.

UKC Forums - Borsuk-Ulam theorem. In reply to DaveHK: Just skimmed over the thread, so my apologies if this has been posted below and I missed it: So if I remember correctly from my university maths ages ago the whole thing is a generalized claim about properties of two steady functions f(x) and g(x) that is obvious for the simple case R -> R case: If within some interval of x f(x) rises from A to B and g(x) drops from B to A, their graphs must cross at some point if neither fuctions is allowed to do sudden jumps. The most intuitive physical equivalent is that you can stabilize any four legged table that stands on uneven ground with one leg in the air by simply rotating it around its centre (the table top may not end up horizontal, of course). Simply plot the height the floating leg will have above or below the ground (relative to some absolute height mark) against the angle of rotation as you turn the table, keeping the other three legs fixed to the ground.

Background matching and disruptive coloration as habitat-specific strategies for camouflage 1.Stevens, M. et al. Phenotype-environment matching in sand fleas. Biol Lett 11, 20150494 (2015).Article Google Scholar 2.Todd, P. A., Briers, R. CFP 8th International Conference on Typography & Visual Communication | Beyond the obvious. Typography and Visual Communication in times of disruption Main Conference 7–9 July 2022 Workshops 5–6 July 2022 | The 8th ICTVC will take place from 5 to 9 July 2022 in Thessaloniki, Greece, celebrating 20 years since its establishment in 2002! The conference will be organised by the Institute for the Study of Typography & Visual Communication and will be supported by a number of academic and professional organisations. A series of workshops will precede the conference and a range of exhibitions will frame and enrich the main event. Since its inception in 2002, ICTVC has been established as one of the most prominent international events in its field.

Syncretism (linguistics) We ask you, humbly: don't scroll away. Hi reader. This is the 9th time we’ve interrupted your reading recently, but 98% of our readers don't give. Many think they’ll give later, but then forget. SAP Jam : Enterprise Social Headed ? Posted February 7, 2014 By Ann AllFeedback The goal for SAP Jam enterprise social networking software is not just to boost collaboration but to make it easier for business people to find the right people, data and processes to do their jobs. Enterprise collaboration has been on many business wish lists for a long time. But it is proving to be an unusually tough nut to crack.

The whole is other than the sum of the parts. Gestalt laws of grouping organising the Good Gestalt. by weihler Oct 3

Related:
Related:  Theories, approaches and methods   -  été14   -  MSNBC - How to Think About the Mind   -  Three-act structure - Wikipedia, the free encyclopedia   -  Morality Quiz/Test your Morals, Values & Ethics - YourMorals.Org   -  How to Write a Synopsis of Your Novel   -  The 4 Story Structures that Dominate Novels   -  How to Plot a Character Driven Book in 3 Easy Steps | Robyn DeHart   -  How to Write a Script Outline | The 8 Essential Plot Points   -  How to Plot a Novel With Index Cards | eHow   -  How It Works | Holacracy   -  25 Unique Places to Find Story Ideas   -  Creative Writing Worksheets--The Writer's Craft   -  How to Organize and Develop Ideas for Your Novel   -  NOVA Elements on the App Store on iTunes   -  Writing Fiction: How to Structure a Killer Novel Ending   -  Genetics   -  Freytag's Pyrmaid   -  Plot Generator   -  Damn it Neil, the name is Nuwanda. | 10 Ways to Create a Plot Twist   -  The%20Story%20Spine.pdf   -  Famous Authors’ Handwritten Outlines for Great Works of Literature – Flavorwire   -  The NEW Periodic Table Song (In Order) - YouTube   -  Here's what Pangea looks like mapped with modern political borders   -  Grammar Girl : Active Voice Versus Passive Voice :: Quick and Dirty Tips ™   -  The Making of the Fittest: Got Lactase? The Co-evolution of Genes and Culture   -  Skillswise - Sentence structure   -  Purdue OWL Writing Exercises   -  How a Scene List Can Change Your Novel-Writing Life   -  Plot Generator   -  How to tell a great story, visualized | TED Blog   -  Simon Sinek: Why Leaders Eat Last - YouTube   -  Grammar Girl : First, Second, and Third Person :: Quick and Dirty Tips ™   -  The Seven Basic Plots - Wikipedia, the free encyclopedia   -  The Universal Shapes of Stories, According to Kurt Vonnegut   -  The Inner Struggle: Guides for Using Inner Conflict That Make Sense   -  A Neuroscientist’s Radical Theory of How Networks Become Conscious   -  The Subplot - Not Second Place, but Side by Side - Writers Write