Brain is not fully mature until 30s and 40s 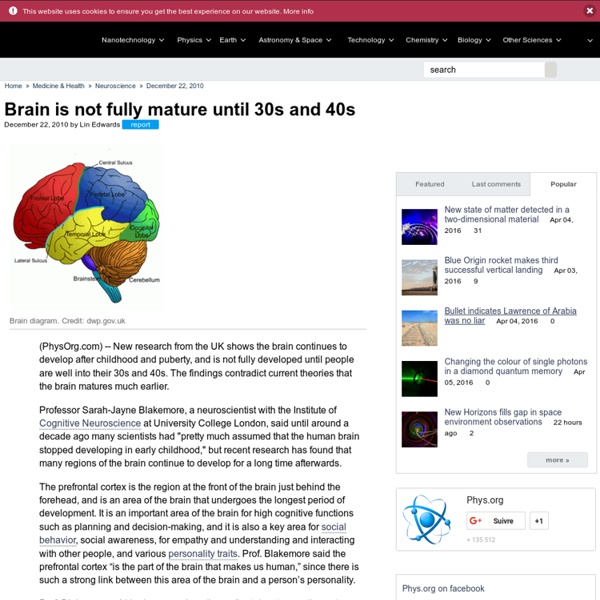 (PhysOrg.com) -- New research from the UK shows the brain continues to develop after childhood and puberty, and is not fully developed until people are well into their 30s and 40s. The findings contradict current theories that the brain matures much earlier. Professor Sarah-Jayne Blakemore, a neuroscientist with the Institute of Cognitive Neuroscience at University College London, said until around a decade ago many scientists had "pretty much assumed that the human brain stopped developing in early childhood," but recent research has found that many regions of the brain continue to develop for a long time afterwards. The prefrontal cortex is the region at the front of the brain just behind the forehead, and is an area of the brain that undergoes the longest period of development. Prof. Blakemore said brain scans show the prefrontal cortex continues to change shape as people reach their 30s and up to their late 40s. Explore further: Study: Our brains compensate for aging

Neurogenesis Neurogenesis (birth of neurons) is the process by which neurons are generated from neural stem cells and progenitor cells. Most active during pre-natal development, neurogenesis is responsible for populating the growing brain with neurons. Recently neurogenesis was shown to continue in several small parts of the brain of mammals: the hippocampus and the subventricular zone. Alzheimer's Disease Fact Sheet Alzheimer’s disease is an irreversible, progressive brain disease that slowly destroys memory and thinking skills, and eventually even the ability to carry out the simplest tasks. In most people with Alzheimer’s, symptoms first appear after age 60. Estimates vary, but experts suggest that as many as 5.1 million Americans may have Alzheimer’s disease.

Women's exercise linked to lower cognitive skill - health - 07 January 2011 WOMEN who habitually take strenuous exercise might be at risk of damaging their cognitive function later in life. Strenuous exercise is known to reduce oestrogen levels in women and girls. This can delay the start of menstruation, and can lead to irregular periods in adult women. The Human Connectome Project The Human Connectome Project Human Connectome The NIH Human Connectome Project is an ambitious effort to map the neural pathways that underlie human brain function. First Alzheimer’s Treatment to Fully Restore Memory Functionality As anyone who has seen what Alzheimer’s can do to a person will tell you, it’s not pretty, it’s not fun and it’s one of the most difficult diseases to deal with for both parties. It’s difficult to watch those you love grow older, but when they begin forgetting everything and everyone around them it can be just as damaging to those around them. What makes this disease such a problem is that there have been no significant advances in curing it or reversing its effects since the initial discovery in 1906. The scientists and researchers from the Queensland Brain Institute at the University of Queensland have been working diligently to discover something that would help, and it appears they may have now found a viable treatment.

Religion May Cause Brain Atrophy Faith can open your mind but it can also cause your brain to shrink at a different rate, research suggests. Researchers at Duke University Medical Centre in the US claim to have discovered a correlation between religious practices and changes in the brains of older adults. The study, published in the open-access science journal, Public Library of Science ONE, asked 268 people aged 58 to 84 about their religious group, spiritual practices and life-changing religious experiences. Changes in the volume of their hippocampus, the region of the brain associated with learning and memory, were tracked using MRI scans, over two to eight years. Protestants who did not identify themselves as born-again were found to have less atrophy in the hippocampus region than did born-again Protestants, Catholics or those with no religious affiliation.

Spatial memory deficits in a mouse model of late-onset Alzheimer’s disease are caused by zinc supplementation and correlate with amyloid-beta levels Introduction Alzheimer’s disease (AD) is the primary cause of dementia in the elderly and currently affects more than five million Americans (Alzheimer’s Association, 2013). The present research focuses on how the biometals, such as zinc (Zn), copper (Cu), and iron (Fe), interact with amyloid beta (Aβ)—the key constituent of the plaques that are characteristic of the disease, which mediates plaque formation and consequent oxidative damage. Zn, Cu, and Fe are found in high concentrations in and around amyloid plaques (Lovell et al., 1998; Maynard et al., 2005), consistent with the notion that Aβ is a metalloprotein that possesses binding sites for both Zn and Cu (Bush et al., 1993; Hesse et al., 1994).