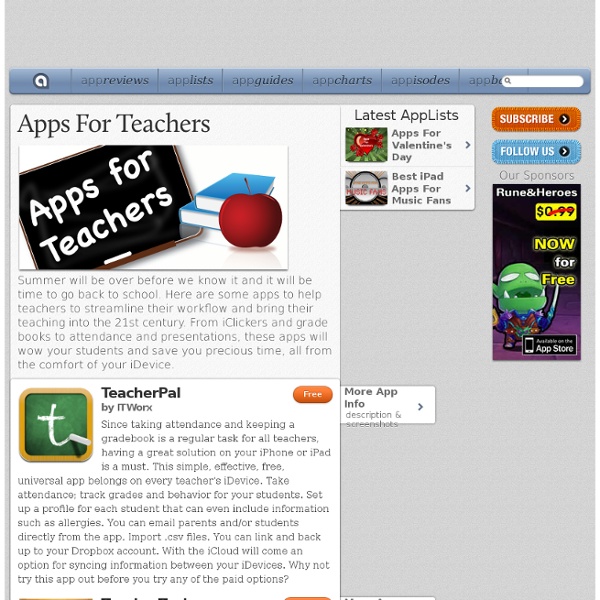 More App Info description & screenshots Free TeacherPal by ITWorx Since taking attendance and keeping a gradebook is a regular task for all teachers, having a great solution on your iPhone or iPad is a must. This simple, effective, free, universal app belongs on every teacher's iDevice. Take attendance; track grades and behavior for your students. Set up a profile for each student that can even include information such as allergies. You can email parents and/or students directly from the app. Import .csv files.

The Ultimate Guide To Using iPads In The Classroom How Students Benefit From Using Social Media 14.60K Views 0 Likes A lot of criticism has been leveled at social media and the effect it has on the way students process and retain information, as well as how distracting it can be. However, social media offers plenty of opportunities for learning and interactivity, and if you take a moment to think about it, it's not too hard to see how students benefit from using social media. 100 Web 2.0 Tools Every Teacher Should Know About A Great Free iPad App for Creating Comic Strips to Use in Classroom January 19, 2014 Finally, the popular comic generator website Make Belief Comix has rolled out its new free iPad app. This app allows you to do pretty much the same thing you would do on its web-based platform.

10 Excellent iPad Applications for Teachers With the iPad2 on the launching pad, it’s a great time to share this list of useful iPad apps for teachers from guest writer Paula Dierkens. There’s no doubt that the iPad is an excellent device, and if you own this gadget, it makes sense to pick up the applications best suited to your lifestyle and profession. So if you’re a teacher, here are ten great iPad apps that you must try out: [Note to readers of this article! I conducted a survey in March of 2012 to update this list of iPad apps that educators like to use in their professional roles, so it is based on actual teacher input. 7 Apps That Will Help You Use Your iPad For Writing Projects While each of us has our own particular needs, I’m sure one or more of these apps will serve your needs. So get ready to set up a folder on your tablet and download a useful collection of resources. Evernote At the top of the list, the popular Evernote app (iTunes Store Link) and web syncing service is an essential tool for writing on the iPad.

Six reasons iPad is an artist's productivity tool There's a lot of folks who say the iPad isn't proper competition for netbooks because it isn't a 'productivity tool'. They're all wrong. Take the visual arts, for example, and you'll find a growing army of examples of artists using the Apple device to create stunning pieces of art, here's six stories to illustrate this. Clearly this illustrates why netbook sales have cramped up and why Apple's iPad is such a success, because it unlocks imagination for users, developers, old and new media. [This story is from the new Apple Holic blog at Computerworld. The Must-Have App Review Rubric Added by Jeff Dunn on 2011-11-22 So you just downloaded a few educational apps that you think might be useful in your classroom. How do you accurately compare and contrast them? Thanks to a new app review rubric from by eMobilize , it’s easier than ever to understand just how useful an app may be in the classroom.

50 Must-Have Educational Apps It’s time for holiday road trips and you know what that means: driving, flying, cranky kids, and… teaching opportunities! What’s that, you say? Well, there is so much downtime during the holidays where kids and adults spend hours just passing the time… why not try out some new apps on your phone? Many of these apps were found by The Teaching Palette, be sure to check out their fantastic site for more helpful resources! 30 Useful iPad Apps for Business & Presentation Apple sold more than 1 million copies of iPads in the first 3 months. This gadget is definitely more than just a larger version of iPhone or iPod touch. With 4x the screen of an iPhone, the iPad’s display is ideal for reading and for presentations. In today’s post, we’d like to highlight some really useful iPad applications that might replace the things you do daily with your laptop or netbook. With a piece of iPad and these applications, you probably don’t need to carry a laptop around.

iPad Tutorial: How to quickly update multiple iPads to a new version of the iOS I’m indebted to my friend Fraser Speirs for this tip. You know how long it can take for the download and update of a single iPad or iPod touch. What if you have more than a few of these devices, perhaps dozens, that need updating to a new version of the iOS? Is there a way to save the time and bandwidth by skipping the download of the same iOS file (hundreds of MB) for each one? I’ll quote mostly from Fraser here and add a few comments and minor edits.