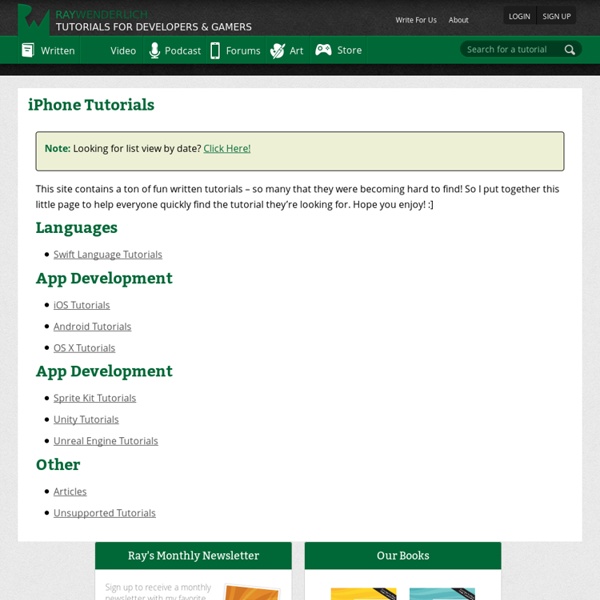 This site contains a ton of fun written tutorials – so many that they were becoming hard to find! So I put together this little page to help everyone quickly find the tutorial they’re looking for. Hope you enjoy! :] Swift Tutorials Get started quickly with this Swift tutorial! Swift is Apple’s entirely new, modern, type-safe programming language for Cocoa development. Beginning Objective-C Objective-C Cheat Sheet and Quick Reference Now Available! You program apps for iOS in Objective-C. Also, if you’re a beginner you should sign up for our monthly iOS newsletter – to thank you for signing up, we’ll give you a free copy of the 1st tutorial in the iOS Apprentice series! Here are some free tutorials based on your experience level: For complete beginners to programming Experienced programmers but new to Objective-C Beginning iPhone Programming iPhone programming is like a ladybug - fun and only a little scary! Crash Reporting Learn how to debug and fix dreaded app crashes! Sprite Kit Tutorials Audio

30 Clever Logos With Hidden Symbolism I am sure every panda enjoyed laughing at Top 15 Worst Logo FAILS ever but let’s be fair here, and look at some of the best logo design examples. To be more specific, let’s have a look at creative Logos With Hidden Messages. As we wrote earlier, the first feature of a good and effective logo is that it can immediately “grab” viewer’s attention. A good way to do so is by giving viewers a little puzzle to solve. Everyone likes puzzles, right? When viewers get the hidden message behind the logo, there’s this instant little satisfaction feeling, and something fun likes this gets people talking and sharing.

Objectively Speaking: A Crash Course in Objective-C for iOS 6 This post is also available in: Japanese, Indonesian Warning: Objective-C Crash Course Ahead! Note from Ray: This tutorial is now fully up-to-date for iOS 6, and uses Modern-Objective-C syntax. Here’s the pre iOS 6 version if you need it! This is a post by iOS Tutorial Team Member Linda Burke, an indie iOS developer and the founder of canApps.

Android Developer SDK Before installing Android Studio or the standalone SDK tools, you must agree to the following terms and conditions. This is the Android Software Development Kit License Agreement 1. Introduction How to Write an iOS App That Uses a Web Service If you're new here, you may want to subscribe to my RSS feed or follow me on Twitter. Thanks for visiting! Web Services + iPhone Apps Rule! As an iOS developer, you often need to use a web service from your app. Top 10 Programming Languages to Learn in 2014 Updated on May 5, 2014 Having spent more than 5 years in software development and the computer programming arena, one of the most common questions I am asked is: This is a question that is asked by beginners, as well as experts. As with many important questions, the answer is not simple.

DESIGN MICROMAX LOGO 1) Upload jpeg samples of your design entries; submit minimum 1 design and maximum 3 designs in JPG. format ,up to 5MB per image. (Upload only one design per attachment) 2) The design must be original 3) Voting begins after the submission deadline Creating Your First iOS Application Even though we've already learned quite a bit in this series on iOS development, I'm sure you are eager to start building iOS applications that do something cool or useful. In this tutorial, your wish is granted. Using Xcode, you'll create an iOS project from scratch, modify the project's source code, and run your application on either the iOS Simulator or a physical device.

Cocoa Touch - iOS Technology Overview Built on Objective-C Much of Cocoa Touch is implemented in Objective-C, an object-oriented language that is compiled to run at incredible speed, yet employs a truly dynamic runtime making it uniquely flexible. Because Objective-C is a superset of C, it is easy to mix C and even C++ into your Cocoa Touch applications.

Cocoa Dev Central: Learn Objective-C Objective-C Objective-C is the primary language used to write Mac software. If you're comfortable with basic object-oriented concepts and the C language, Objective-C will make a lot of sense. If you don't know C, you should read the C Tutorial first. How to Think Like a Computer Scientist — How to Think like a Computer Scientist: Interactive Edition This interactive book is a product of the Runestone Interactive Project at Luther College, led by Brad Miller and David Ranum. There have been many contributors to the project. Our thanks especially to the following: