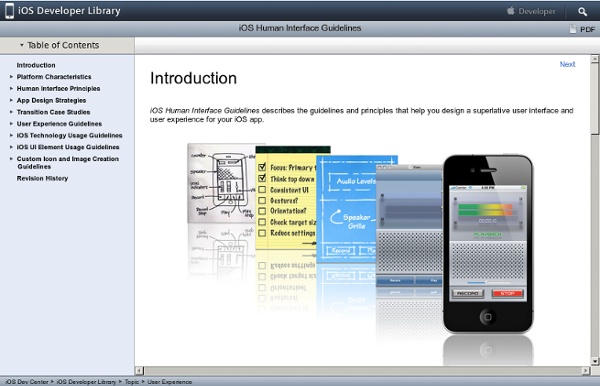 ITS 2010 : Welcome iPhone Web Development Resources, Tools and Tutorials Everybody knows that iPhone is getting more and more popular all over the world, so now its time to take care about iphone web users. Hence here are some great tutorials, tools and resources which will help you to start web development for iphone. Apple- Web Development Guidelines for iPhone Find Articles, Tutorials, Videos and Sample Code for iPhone Web Developers. iui – User Interface (UI) Library for Safari development on iPhone Based on Joe Hewitt’s iPhone navigation work, iUI has the following features: * Create Navigational Menus and iPhone interfaces from standard HTML * Use or knowledge of JavaScript is not required to create basic iPhone pages * Ability to handle phone orientation changes * Provide a more “iPhone-like” experience to Web apps (on or off the iPhone) Web Development for the iPhone Very nice tutorial about Web Development for the iPhone. How to Write Web Pages for the iPhone Basics Behind Building Web Pages for the iPhone iPhoney – Free iPhone simulator for designers

How to Create Your First iPhone Application - Smashing Magazine Advertisement Update: 01/10/2012: The original version of this article by Jen Gordon was published in August 2009. It was thoroughly revised and updated by the author in September 2012. — Editorial Team Since the iTunes App Store launched in 2008, over 500,000 apps have been approved by Apple, and thousands more app ideas are scrawled on napkins across the world every day. The good news is anyone can make an iPhone app, it’s just a matter of knowing the series of actions you need to take to make it happen. What Is Your Goal? The first thing to look at when embarking on any product development or entrepreneurial venture is your goals for the project. Let’s look at an example. would not have planned in advance to hire help,would be unhappy with the time commitment required for him to take on the work personally. Here are some examples of project goals: Action item: Write down the goal you hope to achieve by creating this app. What Are Your Expectations? Where Do I Begin? Large view. Large view.

Designing a Mobile App? Don't Make These 10 Mistakes So you've already learned how to navigate the tricky world of cross-platform app design and worked through all of the common pitfalls of developing your app. You have a vision, some inspiration and maybe even a name that you know will be perfect. So ... now what? It's time to get down to the nitty-gritty and begin designing the structure, flow and features that will combine to form your finished mobile app. But actually performing these tasks isn't easy — there are tons of moving parts and project management aspects to keep in mind during development. These mobile design “don’ts” will help any mobile designer avoid some messy obstacles, so make sure to keep them in mind. 1. Have a well-thought-out user flow ready to go before wireframes and designs begin. Another thing to pay attention to is making sure that key functional screens are close to the top rather than buried beneath multiple levels of navigational elements. 2. In other words, the design should not dictate the functionality.

The Open Source iPhone Game Engine Comparison | iPhone and iPad I’m often asked about which ios game engine to use, and I know most people are looking for a free game engine so here is a comparison of the different open source iPhone game engines that actually have apps out there. These game engines now also support the ipad. There are several open source game engines to choose from, and many cropping up all the time. On this page I have only listed those that I know have been used in games already available on the iPhone or iPad, and with just one exception I have chosen not to list those for which there are no apps available in the app store. The SIO2 game engine has been removed from this listing, as if you go to their site and attempt to download the open source legacy version all you get is a popup telling you to get the new engine — so if you are looking for information on the SIO2 engine please visit the commercial iphone and ipad game engine page. Moai SDK You can create your games with Moai on both Windows (Visual Studio) and Mac (Xcode). Haxe

Sizes of iPhone UI Elements How to detect the current device size and kind Other dimensions common to all screen sizes: Points vs. Apple introduced retina displays starting with the iPhone 4. iOS supports high resolution displays via the scale property on UIScreen, UIView, UIImage, and CALayer classes. To refer to an image in your code (or in Interface Builder), use the filename of the standard sized image. iOS will automatically detect and use the @2x version if the device supports it: imageView.image = [UIImage imageNamed:@"button.png"]; Adjusting Sizes Click here to see how to adjust View Frames and Bounds. Additional References Apple Documentation: Points vs.