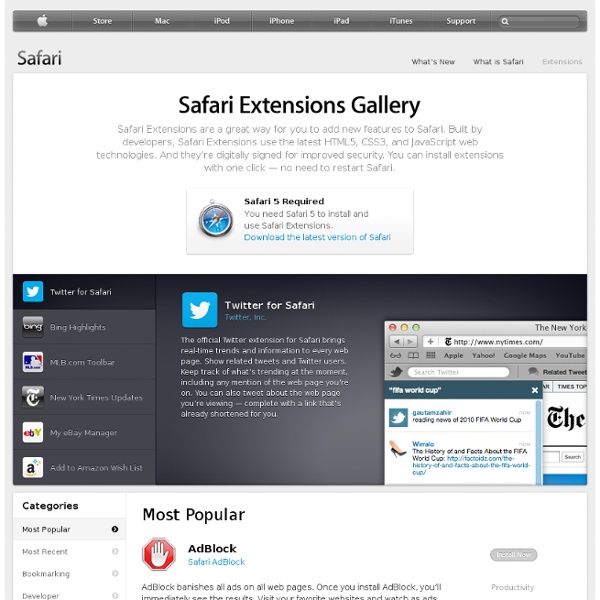 Keep track of everything you want in one place. The official Amazon Wish List extension allows you to add anything from any website to your Amazon Wish List. When you see something you like on any website, just click the Amazon ‘Add to Wish List’ button, and save it to your Wish List. This extension works for all Amazon sites world-wide. Get up-to-the-moment news on all the day’s games. Stay locked on one game or cycle through the live scoreboard.

Get to know iOS 8: Five convenient new tricks in Safari Safari for iOS is as old as the iPhone itself, and even with all the apps that have come and gone in those seven plus years, Safari is the old standby, the essential app that’s in the dock row of millions of iPhones and iPads. Apple improves Safari in every iteration of iOS, and iOS is no exception. The changes aren’t radical, but they do add some extra flexibility and convenience to browing the web on your iPad and iPhone. Safari 5.0.1 Lands, Comes With Extensions Fresh off the heels of launching a slew of new products yesterday, Apple this morning debuted Safari 5.0.1, switching the flip on Safari Extensions and formally introducing the Safari Extensions Gallery, a directory of available extensions across categories. The company had introduced extensions support in Safari 5 last June, giving developers the opportunity to start creating browser add-ons using HTML5, CSS3 and JavaScript standards. Perhaps surprisingly, two fierce Apple competitors were given the opportunity to tout their extensions first and foremost, namely Amazon.com with their Wish List extension and Microsoft with their Bing Extension for Safari.

Vision » 4All » Tech Ease Introduction to VoiceOver VoiceOver is the screen reader built into Mac OS X. It includes Alex, an advanced system voice that closely resembles a human voice. The VoiceOver Quick Start Tutorial VoiceOver is the screen reader included with Mac OS X. Safari Dev Center Safari offers leading performance, compatibility, and a great set of built-in web development tools. And with Safari Push Notifications in OS X Mavericks, you can keep your users up to date with news, sports scores, and other alerts - even when Safari isn’t running. Safari Push Notifications Keep users up-to-date with news and other alerts using Apple push notifications.

7 Assistive Communication Apps in the iPad App Store Augmentative and Alternative Communication Augmentative communication (AAC for short) is an alternative way to help students and adults with language disorders use expressive language or receptive language. Augmentative communication can be accomplished through assistive technology devices such as computers or hand held devices. Twenty years ago if your child was non-verbal your resources where very limited. Advanced communication was limited to low technology such as picture communication systems and sign language. Native on Blogger Today we are proud to announce Zemanta just became available as a native Blogger Gadget to millions of blogger.com users! No extensions, no plugins, just click here to add gadget and your personal blogging assistant is ready to go. We all admire blogger.com for it’s great contribution to making blogs popular and mainstream. Initially a simple yet powerful platform they managed to appeal to the widest audience and becoming a member of the Google family enabled them to stay focused on what’s best for their users.

Pingback See also[edit] WebMention, a modern re-implementation of PingBack using HTTP and x-www-urlencoded POST data.Linkback, the suite of protocols that allows websites to manually and automatically link to one another.Refback, a similar protocol but easier than Pingbacks since the site originating the link doesn't have to be capable of sending a Pingback request.Trackback, a similar protocol but more prone to spam.Search engine optimization References[edit] External links[edit] Trackback Flaws with Twitter, Disqus, and Wordpress? So just checking my notebook stats today and I saw that for some reason I had a major spike in hits. Typically the weekend is dead, but I guess science breaks the boundaries for social media promotion and web surfing traffic. Typically WordPress Stats don’t reveal too much, but I noticed that I got a large number of visitors from Twitter and most of them ended up on my post of me complaining about the lack of functionality of Google+ Pages and the chaotic organization of Facebook Pages. Since my site stats only say referrers are coming from Twitter.com I have to go to my notebook page and check the Reactions in Disqus or check the tweet counter (which is part of the WordPress site stats add-on). Both features are supposed to track social media links and commentary about the posts, and in all honesty I have no idea how it works (maybe I can have Alex look into this). These features seem to work well, but there is a bit of inconsistency sometimes as with most softwares.

Getting pingbacks & trackbacks working with Disqus & WordPress … previously a digital agency Hi. You’re looking at this page because you’ve followed a link to a page on fublo.net - this was previously the website of Fublo Ltd, a small digital agency in London that closed in August 2012. Fublo will close for business at the end of August. An updated home page is in the pipeline. Example We’ve been listening to your feedback and as a result, we have made a number of changes we’d like to share with you. Tweeting comments is the ability in which commenters are able to tweet out every time they leave a comment, with a link back to the article. Disqus is now using Twitter’s OAuth support for tweeting comments. You may now securely use Twitter with Disqus without entering in your password. {*style:<i>If you’ve added your Twitter credentials beforehand, you’ll just need just reauthorize using OAuth here: </i>*}

Developer Garage Paris April 2012 Invalid quantity. Please enter a quantity of 1 or more. The quantity you chose exceeds the quantity available. Please enter your name. Open Graph Submissions Update As of today, over 90% of the thousands of Open Graph submissions we have received since f8 have been fully reviewed and responded to. The remainder is on track to be completed within the next few weeks. To best prepare for approval, please make sure your app complies with the Open Graph Checklist. This applies to those that are pending as well as those that have received a response to resubmit. To streamline the review of your submission, here are a few areas to pay attention to: Outline concise, step-by-step usage instructions.