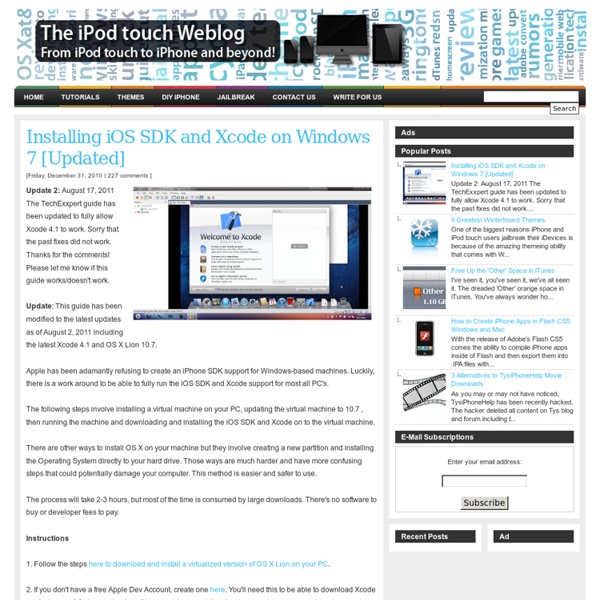 Update 2: August 17, 2011 The TechExxpert guide has been updated to fully allow Xcode 4.1 to work. Sorry that the past fixes did not work. Thanks for the comments! Update: This guide has been modified to the latest updates as of August 2, 2011 including the latest Xcode 4.1 and OS X Lion 10.7. Apple has been adamantly refusing to create an iPhone SDK support for Windows-based machines. The following steps involve installing a virtual machine on your PC, updating the virtual machine to 10.7 , then running the machine and downloading and installing the iOS SDK and Xcode on to the virtual machine. There are other ways to install OS X on your machine but they involve creating a new partition and installing the Operating System directly to your hard drive. The process will take 2-3 hours, but most of the time is consumed by large downloads. 1. 2. 3. 4. 6. 7. If the icons don't show up, you may not have enough virtual hard drive space to fit the program.

How to Virtualize OS X Lion on Windows Update: Fixed down hard drive files (February 8, 2012). Sorry about the delay guys, this page has been updated so that Xcode 4.1 does not crash anymore. (August 17, 2011). If you've tried to virtualize previous versions of OS X, you know that it is a very tedious and time consuming process. This new guide works by giving you a simple VMWare Image. This means that the OS has already been pre-configured on a hard drive. This guide will show how to setup a fully working OS X Lion 10.7 on a Windows machine. Requirements A laptop or desktop computer that supports virtualization (most newer computers do). An updated video has been made of all the new steps: 1. 2. 3. 4. 5. 6. 7. 8. 9. 10. 11. 12. 13. 14.

An introduction to Objective-C If you are serious about becoming an iOS developer then it is imperative that you learn Objective-C which is an extension of the C language. If you already have experience with an object-oriented language then learning Objective-C should be quite straightforward. Never written a line of code? If you’ve never written a line of code and are interested in developing iOS apps then I would highly recommend picking up either of these books: Programming in Objective-C or Cocoa Book Basic Syntax for a Class Most object oriented languages have something called a class which encapsulates data and provides access to it. All classes are declared in two parts: .h – contains the interface which is a declaration of the class structure .m – contains the implementation of all the methods The member variables by default are set to private hence you have to write accessor methods which are your getter and setter methods. Methods There are two types of methods in Objective-C: class methods and instance methods.

How To Develop A Simple iPhone App & Submit It To iTunes Like cooking, there is a bit of a process involved in “cooking” up an app. This article isn’t about your style of cooking, per se (i.e programming), but just the general steps necessary to get it from your head and into iTunes. Creating an app isn’t entirely free, so it is important to know up front that, at some point in this process, you will be shelling out $99 (USD). Now that we have all seen the fine print, here are the exciting steps to app happiness! Step 1: Craft A Brainy Idea Have a unique idea for an app? Be sure to check that there aren’t other apps that do the same thing that you are proposing. Step 2: Get A Mac The iPhone is an Apple product and uses a variation of the Mac OS. Step 3: Register As An Apple Developer To work with the Mac tools, you will need to become an official Apple Developer. Step 4: Download The Software Development Kit For iPhone (SDK) Once you are an official developer, you can download the SDK for iPhone. Step 5: Download XCode Step 10: Host A Bake Sale

Sliding Panels Sample When Adobe first introduced Spry, our goal was to bring Ajax capabilities to the web design community, allowing designers to create web pages that provided a richer experience for the end user. As we know, however, the web evolves at a blistering pace. Over the last couple of years, frameworks such as JQuery have evolved to encompass many of the capabilities originally envisaged for Spry, making Spry as a standalone offering less relevant. As we can continue to focus our efforts in furthering the web, we have decided to no longer invest in the development of Spry. We do however recognize that for some designers it continues to provide value. As such, we are making the Spry framework, along with supporting documentation and example code, available on GitHub under an MIT license so that designers will continue to have access to the framework and can customize/extend it as required. Download Spry from Adobe GitHub account

vfr.org | Scito te ipsum vfr/Reader Tom Brow App Store-safe Page Curl animations Update February 22, 2013: Please do not use the code I present in this article anymore. The iOS SDK has progressed tremendously since I wrote this post in 2010, and now provides a native implementation of the page curl gesture/animation in the form of UIPageViewController. This API is a lot more flexible and easier to use than the Leaves project discussed here. Even if its usefulness is questionable, the page curl has become one of the signature effects of Apple’s iOS devices so it is no surprise that many developers would like to implement this effect in their apps. iBooks on the iPad doing a page curl The problem is that the page curl animation used by Apple is not exposed in a public and documented API. I hope Apple makes this public in the future (and if you want to have it, too, you should file a bug and request it). The end result is not quite as stunning as Apple’s solution but it is a very good workaround. Page curl in the Leaves project in side-by-side view

shuhongwu/leaves-zoom-enhanced (ARC) Automatic Reference Counting Tutorial And Guide Page Automatic reference counting (ARC) was introduced in the iOS 5 sdk to free Objective-C programmers from having to handle memory management by making memory management the job of the compiler. If you developer with Objective-C prior to the iOS 5 SDK or talked to Obj-C programmers then you are probably aware of how tedious task memory management could become. When using ARC there is no need for retain and release calls, and not only that in many cases ARC can provide a significant performance increase. You can read many of the fine details about automatic reference counting in the official documents on the LLVM website here. On this page you’ll find tutorials and guides giving a general overview of ARC and handling specific cases. Other iOS 5 SDK related tutorials can be found on the iOS 5 tutorial page. ManiacDev.Com ARC tutorials: Other ARC tutorials: Cocos2D And ARC – A tutorial featuring instructions from Tiny Tim on implementing automatic reference counting on a build of Cocos2D.

Onswipe How to make a magazine app in iOS – Part II Welcome to the second part of this tutorial. Previous in the series:How to make a magazine app in iOS – Part I The iOS5 revolution A lot of water has flowed under the bridge since our first part of this tutorial. We’re sorry for the delay, but at the time of writing we were aware of the new featured introduced with iOS5 but we were still under NDA and not authorized to disclose anything about the SDK. Finally we’re now able to provide our example magazine app with the double iOS4/iOS5 compatibility. I will not spend my time explaining all the Newsstand features, all in all we’re creating a magazine app here and the Newsstand implementation details go beyond our original purposes. The example app The screenshot shows the final appearance of the app. The full app code is available on GitHub. I have setup this app using the basic single window Xcode template and then added the two main components in the application delegate startup method: The two components are: Models and Controllers