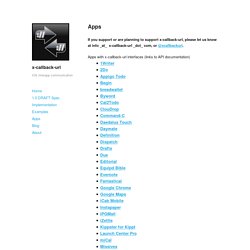 Apps with x-callback-url interfaces (links to API documentation) Know of an app supporting x-callback-url not list here? Please let us know! Phillip Gruneich has also been maintaining a great great list of apps with callback support. A directory of apps supporting x-callback-url is maintained at handleOpenURL.com, and excellent resource for finding out about all sorts of great URL actions available on iOS. HandleOpenURL, Shared Interapp Communication on iOS. Launch Center Pro for iPhone and iPad — Everything you need to know! How to share an action in Launch Center Pro Launch Center Pro lets you create actions for all the things you do regularly on your iPhone and iPad, from emailing a specific person to sending a boilerplate text message, it can do it all. 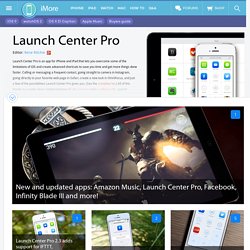 What's more, if you create a particularly cool action, you can easily share it with friends, families, co... How to use Launch Center Pro to make your iPhone a productivity powerhouse. Launch Center Pro is an app that can really boost your productivity on your iPhone, but like with anything that will help you improve your overall efficiency and effectiveness, it does take some front-end work at the beginning. 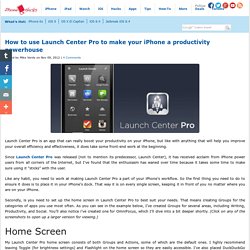 Since Launch Center Pro was released (not to mention its predecessor, Launch Center), it has received acclaim from iPhone power users from all corners of the Internet, but I’ve found that the enthusiasm has waned over time because it takes some time to make sure using it “sticks” with the user. Like any habit, you need to work at making Launch Center Pro a part of your iPhone’s workflow.

So the first thing you need to do to ensure it does is to place it in your iPhone’s dock. That way it is on every single screen, keeping it in front of you no matter where you are on your iPhone. Secondly, is you need to set up the home screen in Launch Center Pro to best suit your needs. Home Screen Contact Group Productivity Group Writing Group OmniFocus Group Bookmarks Group.

One Tap Less. Using Launch Center Pro's [prompt-list] for Better Interaction with List Apps... I bet everyone has his own favorite list app. 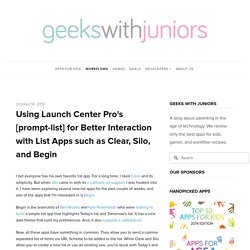 For a long time, I liked Clear and its simplicity. But when Silo came in with its x-callback-url support, I was hooked into it. I have been exploring several new list apps for the past couple of weeks, and one of the apps that I'm interested in is Begin. Begin is the brainchild of Ben Brooks and Kyle Rosenbluth who were looking to build a simple list app that highlights Today's list and Tomorrow's list. It has a nice dark theme that suits my preferences. Now, all these apps have something in common.

Clear allows you to specify the list name that you're targeting in the URL. By default, Begin will add all items into the Today's list. Begin has a nice dark theme and a simple approach to manage to-do lists. Adding Multiple Items at Once When doing a "brain dump", I'd like to write as many things as possible in Drafts, and send them in as a batch to Clear or Silo. Workflow Automation. iOS Automation. Powerful automation made simple. Workflow (@WorkflowHQ) Workflow: Powerful Automation for iPhone and iPad. Workflow Gallery. Workflow 1.1: Deeper iOS Automation. Released by a small team of indies in December 2014, Workflow reinvented iOS automation. 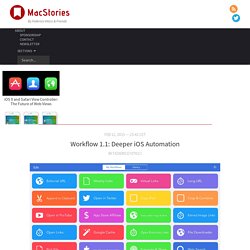 Combining an interface reminiscent of Apple's Automator for OS X with easy access to native iOS features such as Safari, the photo library, and iOS 8 extensions, Workflow promised to make automating tasks on an iPhone and iPad a simple and pleasant affair. The results spoke for themselves: Apple selected Workflow as Editor's Choice, the app trended for weeks in the App Store's Top Charts, and thousands of users released interesting and useful workflows in various online communities. MacStories readers may remember that Workflow was my iPad app of the year. Workflow is one of those few apps that have dramatically changed how I work on my iPad. For me, the point of using Workflow isn't to put together chains of actions to show off the app's power – I just want to save time I can spend doing something else.

Workflow fits my routine like a glove. UI Improvements You can download it here. Search Pocket And: Workflows, tips & tricks.