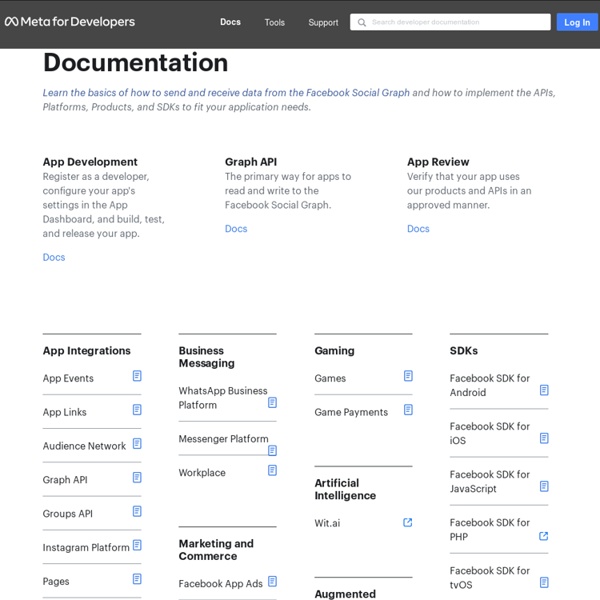 Top 4 open source augmented reality SDKs Advancements in augmented reality (AR) technologies have unearthed possibilities that previously were restricted to our imaginations. Today, it's possible to use sophisticated computer-produced vision to augment our physical environment in entirely new and captivating ways. The resulting boom has led developers to seek out the best open source AR software development kits (SDKs) to build the next big AR-powered applications and games. This includes people like Swizec, who has spent the past 10 years working in AR and developing apps like the projects shown on LiveEdu.tv. Client-Side Authentication If people using your app aren't logged into your app or not logged into Facebook, you can use the Login dialog to prompt them to do both. Various versions of the dialog are shown below. If they aren't logged into Facebook, they'll first be prompted to log in and then move on to logging in to your app. The JavaScript SDK automatically detects this, so you don't need to do anything extra to enable this behavior. Invoking the Login dialog

Python Web Development - Python Tutorial A login web app made with Flask Web applications created in Python are often made with the Flask or Django module. Most web applications use databases (such as SQLite or MySQL) or data structures (JSON) If you are a total beginner to web development, I recommend taking one of the courses below Android Tutorial To use Facebook SDK in a project, add it as a build dependency and import it. 1. Go to Android Studio | New Project | Minimum SDK Creating a Twitter App Using Python 3 and Tweepy Introduction Having access to the Twitter API can help you manage your social media accounts, and allow you to mine social media for data. This can be useful for brand promotion if you represent a business or an organization, and it can be enjoyable and entertaining for individual users and hobbyist programmers. In this article, we will outline the steps necessary for you to create a Twitter application. We’ll then build a script in Python that uses the Tweepy library to make use of the Twitter API. Prerequisites

The Rise Of Facebook’s Valuation From 2004-2011 [Graphic] Click image to enlarge. The panic at absurd rumors of Facebook’s demise over the weekend, coupled with the Goldman Sachs Facebook investment frenzy at the beginning of this year got us thinking; Did initial Facebook investor Peter Thiel, who invested 500K early on and still thought Facebook was undervalued at $30 billion back in September, actually make the most impressive investment call in tech history? So artist Audrey Fukuman, our rockstar intern Rip Empson and I set out to capture what the Facebook valuation trajectory looked like. SDK for iOS Tutorial The SDK comes with samples that demonstrate some of its features. To find and run these samples, download the SDK, and then click on the .pkg file and follow the wizard to install it. Once the SDK is installed, go to the FacebookSDK folder (located by default inside your Documents folder), and there you will find a Samples folder that contains the samples you're looking for.

How to create a webscraping twitter bot in Python Let’s look at building a twitter bot that scrapes information from one part of the web and then spits it out on twitter. There are a few good examples if you want to generate ideas for a twitter bot such as @bbcbweaking, @poemexe and my own @rnghaiku. In this example we will write something that simply finds the first dev.to post and tweets the title. Requirements:PythonText editorBrowserPatience Before we write even a line of code we need to download two incredibly powerful modules namely: beautifulsoup and tweepy. Beautifulsoup will handle the webscraping and tweepy will handle the twitter API requests. Webscraping

About Twitter’s APIs Twitter is what’s happening in the world and what people are talking about right now. You can access Twitter via the web or your mobile device. To share information on Twitter as widely as possible, we also provide companies, developers, and users with programmatic access to Twitter data through our APIs (application programming interfaces). This article explains what Twitter’s APIs are, what information is made available through them, and some of the protections Twitter has in place for their use.

10 Of The Best Facebook Applications for Webmasters Facebook has become the biggest social networking website in the world and it is a great way to get yourself noticed. It doesn’t matter whether you are a designer, a web developer or anything else; Facebook offers a number of great ways to network with your clients and keep in contact with them. We have found 10 of the best Facebook applications for webmasters that will really help you. Enjoy! 1. Pagemaps Authentication within a Canvas Page Whether someone is not logged into your app or not logged into Facebook, you can use the Login Dialog to prompt them to do both. If they aren't logged into Facebook, they'll be first prompted to login, and then move onto logging into your app - this is automatically detected, so you don't need to do anything extra to enable this behavior. Invoking the Login Dialog