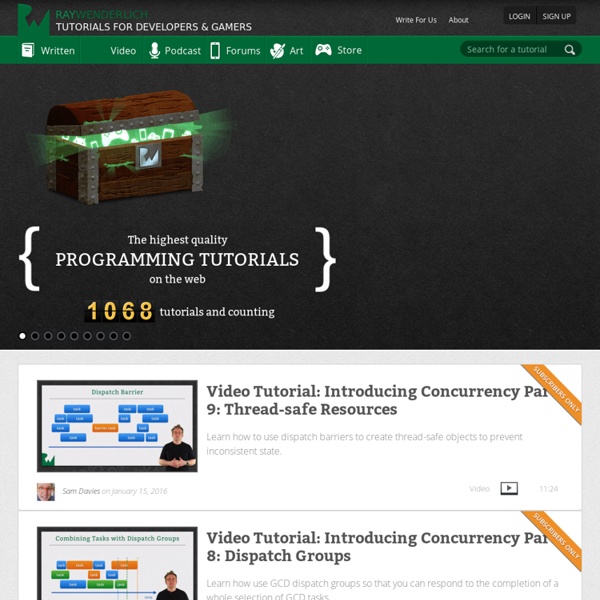 Reminder: Free Live Tech Talk (Reactive Cocoa) Tomorrow (Tuesday)! Check out our live tech talk on Reactive Cocoa with Colin Eberhardt and Justin Spahr-Summers! Video Tutorial: Beginner OpenGL ES and GLKit Part 5: 3D Transformation Learn how to use 3D transformations to move from a square to a cube: model, view, perspective, and viewport transformations. How to Save your Game’s Data: Part 2/2 In the second part of this tutorial, you will be adding your own anti-cheat system as well as saving your game’s data into iCloud.

A Swift Introduction to Realm, with Tim Oliver Sign up to be notified of new videos— we won’t email you for any other reason, ever. About the Speaker: Tim Oliver Tim Oliver hails from Perth, Australia! He has been an iOS developer for 6 years, and recently joined Realm in March 2015. Tim has a cool app called iComics and he loves karaoke! He does, in fact, also sometimes have the problem of too many kangaroos in his backyard. Swift Programming Language Modern Swift is the result of the latest research on programming languages, combined with decades of experience building Apple platforms. Named parameters are expressed in a clean syntax that makes APIs in Swift even easier to read and maintain. Even better, you don’t even need to type semi-colons. Inferred types make code cleaner and less prone to mistakes, while modules eliminate headers and provide namespaces. To best support international languages and emoji, Strings are Unicode-correct and use a UTF-8 based encoding to optimize performance for a wide-variety of use cases.

Learn Web Design - Educational Resources Tutorials & Guides Free or Low Cost Keep your hard-earned dollars in your pocket Text-Based Good for those who like to learn via reading and see text code examples Shay Howe's Guides to HTML & CSS Swift for Complete Beginners – a free Hacking with Swift tutorial Swift is a fast, free, powerful and flexible programming language from Apple, and you can use it to make any kind of iPhone and iPad apps you can imagine. But if you're just starting out, you might be a bit overwhelmed: where do you start? What tutorials are best?

Cocoa Touch - iOS Technology Overview Built on Objective-C Much of Cocoa Touch is implemented in Objective-C, an object-oriented language that is compiled to run at incredible speed, yet employs a truly dynamic runtime making it uniquely flexible. Because Objective-C is a superset of C, it is easy to mix C and even C++ into your Cocoa Touch applications. As your application runs, the Objective-C runtime instantiates objects based on executing logic – not just in ways defined during compilation. For example, a running Objective-C application can load an interface (a nib file created by Interface Builder), connect the Cocoa objects in the interface to your application code, then run the correct method once the UI button is pressed. No recompiling is necessary.

Node.js Tutorials and Resources Node.js is increasingly gaining popularity among web developers. Due to all hosting companies Node.js remains the prerogative of dedicated servers and VPS. Actually VPS is a solution that even a small startup can afford. For more details refer to the documentation on nodejs.org. As you know, Node.js supports modules. Hacking with Swift – learn to code iPhone and iPad apps with free Swift 3 tutorials If this is your first time learning Swift, you should start at the introduction and continue from there. If you're already experienced with Swift, dive in wherever takes your interest! Introduction to Swift

Android Developer SDK Before installing Android Studio or the standalone SDK tools, you must agree to the following terms and conditions. This is the Android Software Development Kit License Agreement 1.