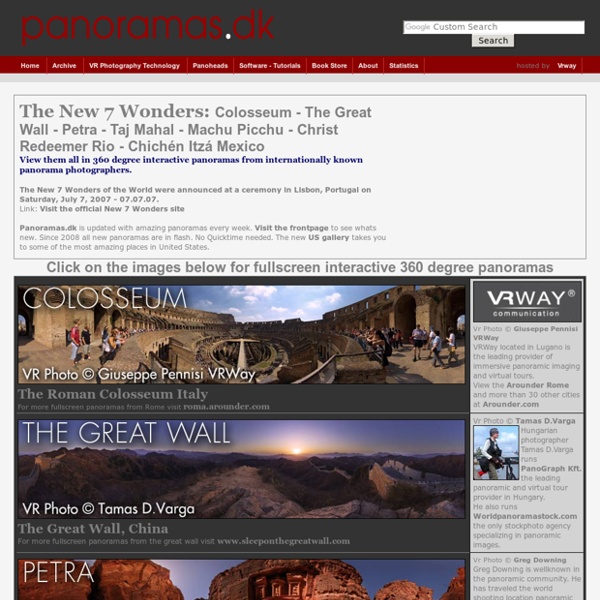 Mount Everest-Monte Everest -360 panorama view from summit - Climbing Mt Everest - Nepal Trekking-panoramic photo from top of Mont Everest It is from a book titled Everest: Reflections From the Top by Christine Gee & Garry Weare which just been published. Panoramic Photography Part 2 "View of Washington. Looking East from Washington Monument" (Top) This panorama is dated November 1916 and was taken by the H. W.

Explore Ancient Egypt Explore Ancient Egypt With 360-degree and other imagery, walk around the Sphinx, enter the Great Pyramid, visit tombs and temples, and more. Want to walk around the Sphinx? Clamber inside the Great Pyramid of Giza and seek out the pharaoh's burial chamber? Versailles Galerie des Glaces - Panoramiques 360 panorama photo à 360 degrés QTVR copyright @ Hans Nyberg - panoramas.dk · www.qtvr.dk · www.360-foto.dk · www.virtualdenmark.dk · Privacy Policy I panoramas.dk is hosted by: VRWAY Important info about Copyright: All panoramas featured at panoramas.dk are copyright the individual photographers. Linking directly to the movies Quicktime or Flash is strictly forbidden. If you which to use any of the panoramas for any purpose, commercial or editorial you are requested to contact the photographer who has the copyright and is listed on all fullscreen pages.

Acropole d'Athènes The Propylaia, famous already in antiquity for its brilliant coffered ceilings and the unique design of the monumental entrance to the sanctuary of Athena, was a work of the architect Mnesikles (437-432 B.C.). It consists of a central building with two six-columned Doric porticoes east and west and two Ionic colonnades in the interior, framed at the north and south by two wings with porches in the Doric order. The outbreak of the Peloponnesian War meant that the final work on the surfaces of the monument was never completed. The destruction of most of the superstructure of the central building during the years 1640-1830 , after the explosion of gunpowder that was stored in the monument by the Turks, has led to a gradual loss of authentic building material, so that until now no more than one fifth of it had been recognised.

Pyramides de Gizeh 3841 tombs and monuments listed. Thanks to 10 years of collected research, Dassault Systèmes was able to reconstruct the Giza Necropolis as accurately as possible.