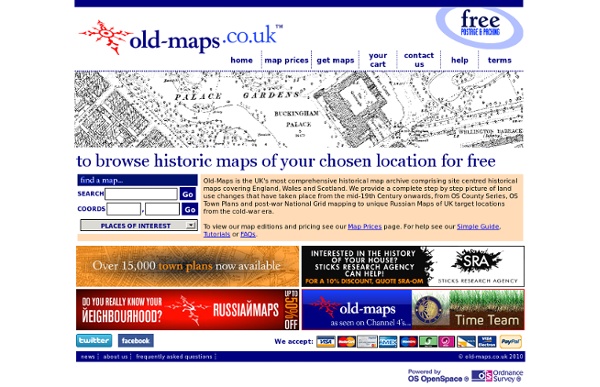 Old-Maps is the UK's most comprehensive historical map archive comprising site centred historical maps covering England, Wales and Scotland. We provide a complete step by step picture of land use changes that have taken place from the mid-19th Century onwards, from OS County Series, OS Town Plans and post-war National Grid mapping to unique Russian Maps of UK target locations from the cold-war era. To view our map editions and pricing see our Map Prices page. For help see our Simple Guide, Tutorials or FAQs.

Res Obscura: The Most Wonderful Map in the World: Urbano Monte's Planisphere of 1587 At some point in 1589, a Milanese cartographer named Urbano Monte made up his mind: his self-portrait needed updating. Monte carefully crouched over the section of his map that bore his self-portrait from two years earlier — close-cropped sandy hair, a trim beard, modest clothes — and pasted a new self-portrait over it. The resulting double self-portrait (Monte at 43, hidden beneath a new portrait of Monte at 45) testifies to the persistence of male pattern baldness throughout human history. 1 - 20 of 10934 from the Library of Congress ↓ Refine your search Map of the Iowa Central Air Line Rail Road and its connections. Scale ca. 1:1,550,000. Entered according to act of Congress in the year 1857. LC Railroad maps, 435 Description derived from published bibliography.

Crimeculture Christopher Pittard, University of Newcastle There are two points to consider when talking about Victorian detective fiction: firstly, that the detective story as a distinct genre is a product of the nineteenth century; and secondly, that only a small amount of the detective fiction produced at the time is still read and studied. For most people, Victorian detective fiction is constituted by the Sherlock Holmes stories (despite the fact that a number of these stories were written well into the twentieth century) and perhaps the trio of Dupin tales written by Edgar Allan Poe in the 1840s. Some readers may also be aware of the detective story's generic cousin, the sensation novel, and in particular the contribution of Wilkie Collins to the genre. ICT in the Curriculum 2012 - ICT in the Curriculum 2012 Can't say the NSA/PRISM security services surveillance controversy has got me very hot under the collar. Maybe its just that I struggle to get excited about Big Brother-esque snooping, when privacy is something of a redundant concept these days - CCTV is everywhere in the UK, even in Welsh forests! You are being watched! Though phone tapping is another issue, I have always taken it for granted that electronic communication is a public forum. Though I must admit I have broken my own rule a few times in the heat of the moment, I would never send an email or put a post on Twitter or Facebook that I wouldn't be happy for the whole world to see (including MI5 and Mr Gove).

Download 91,000 Historic Maps from the Massive David Rumsey Map Collection Three years ago, we highlighted one of the most comprehensive map collections in existence, the David Rumsey Map Collection, then newly moved to Stanford University. The Rumsey Collection, we wrote then, “contains a seemingly inexhaustible supply of cartographic images”—justifiable hyperbole, considering the amount of time it would take any one person to absorb the over 150,000 physical artifacts Rumsey has amassed in one place. By 2016, Rumsey had made almost half the collection—over 67,000 images—freely available in a digital archive that has been growing since 1996. Each entry features high-resolution scans for specialists (you can download them for free) and more manageable image sizes for enthusiasts; a wealth of data about provenance and historical context; and digital, user-friendly tools that use crowd-sourcing to measure the accuracy of antiquated maps against GPS renderings. To make this document even more compelling, it contains its own bibliography.

Historical Map Web Sites Support Your Libraries My Account Home > Finding Information > PCL Map Collection > Historical Map Web Sites MapsMaps FAQ Joyful Molly UNDER CONSTRUCTION (status: September 2010) Until this part has been updated, please see the original list here. Thanks a lot for your patience. “How on earth can I write about something I don’t know anything about?!” This question started the “useful list”; a helpful link-collection for myself and my fellow authors of Age of Sail fiction. There are books, my preferred method of research, but not everybody has the time or the financial means to fill the halls with piles of paper. WikiPrimaryHistory? This page began life as a rather tongue in cheek response to the new English National Curriculum for History, published for consultation on 7th February 2013. The sustained focus in the key stage one and two programmes of study on factual knowledge to be acquired has caused something of stir amongst teachers, teacher educators and academics. The thinking behind the approach can be found in this recent speech.