WhatWasThere - Put history in its place! 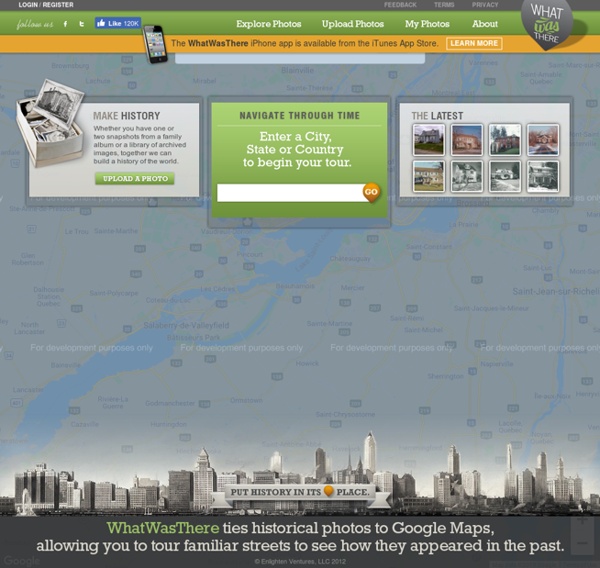 Must See Picture Books for Kids! Below is a continuation of our big list of Caldecott Award winners. The books listed on this page of our list are surely some of the most stunning and extraordinary picture books for kids that have ever been published. Each one merits the honor. Caldecott Committee: We agree! Every year we fall in love with the handful of Caldecott Award winners, but we think the 2000s are particularly fabulous. Hidden codex may reveal secrets of life in Mexico before Spanish conquest One of the rarest manuscripts in the world has been revealed hidden beneath the pages of an equally rare but later Mexican codex, thanks to hi-tech imaging techniques. The Codex Selden, a book of concertina-folded pages made out of a five-metre strip of deerhide, is one of a handful of illustrated books of history and mythology that survived wholesale destruction by Spanish conquerors and missionaries in the 16th century. Researchers using hyperspectral imaging, a technique originally used for geological research and astrophysics, discovered the underlying images hidden beneath a layer of gesso, a plaster made from ground gypsum and chalk, without damaging the priceless later manuscript. The underlying images must be older than the codex on top, which is believed to have been made about 1560 and was donated to Oxford’s Bodleian library in the 17th century by the scholar and collector John Selden.

Historical maps home page Down to: 6th to 15th Centuries | 16th and 19th Centuries | 1901 to World War Two | 1946 to 21st Century The Ancient World ... index of places Aegean Region, to 300 BCE Aegean Region, 185 BCE IWitness - Education through Genocide Testimony Liberation Heroes: The Last Eyewitnesses Explore classroom-ready resources in support of USC Shoah Foundation's new documentary, Liberation Heroes: The Last Eyewitnesses, which premiered on the Discovery Channel in honor of Holocaust Remembrance Day. Explore » Stronger Than Hate Map: Vaccine-Preventable Outbreaks This interactive map visually plots global outbreaks of measles, mumps, whooping cough, polio, rubella, and other diseases that are easily preventable by inexpensive and effective vaccines. Red triangles indicate attacks on vaccinators and healthcare workers, as well as announcements from both governments and non-state actors that have had an impact—either positive or negative—on the successful implementation of vaccination programs. The Global Health Program at the Council on Foreign Relations has been tracking reports by news media, governments, and the global health community on these outbreaks since the fall of 2008. This project aims to promote awareness of a global health problem that is easily preventable, and examine the factors that threaten the success of eradicating preventable illnesses such as polio.

Atlantean Puzzle Pieces See the following Nahuatl (Aztec Words) before beginning this article: Atl = Water.Atlan = In, by, alongside, under water.Atlah= Abundant water.Ahtlantica=A big stretch of abundant water (A Nahuatl name for the Atlantic Ocean.).Atlantona = Resplendent Lady of Water (Another Nahuatl name for the Atlantic Ocean).Atlantech/Atlantesh = Place under, by, in, alongside water.Atlantes = Nahuatl name for Atlas holding up the world. Atlantean Puzzle Pieces Copyright by Ed Ziomek, Stamford, CT, and Johnny Ziomek (Los Angeles) The following are plausible explanations and theories, leading us closer to the historical truths we all seek.

America: A Narrative History, 8e: W. W. Norton StudySpace US History Tours powered by Google Earth. This new format traces historical developments across time, touching down on locations vital to our nation's heritage and development. Points of interest in each tour launch primary and multimedia sources.