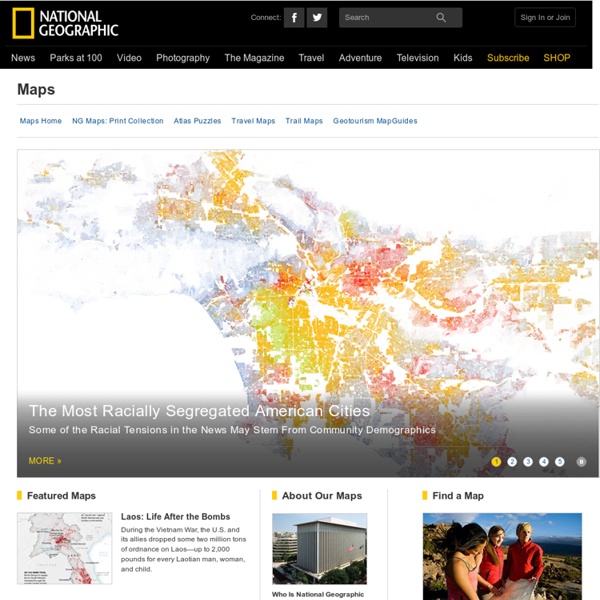 Crimea's Turbulent Past in Maps Crimea has been invaded many times before, as these historical maps show. Nat Geo Maps Show Big Changes The world we're mapping in 2013 is a very different place than it was 50 years ago. Nat Geo's Cartographic Typefaces Our maps have long been known for their distinctive typefaces. But few outside the Society know little of the history that lies behind them. How Do We Change Maps? Cape Verde's name change to Cabo Verde prompted us to take a behind-the-scenes peek at how National Geographic handles ever-shifting maps.

Mappy - planos, itinerarios, callejeros de Europa National Atlas home page The National Map is now offering a collection of small-scale datasets that can be downloaded for free. Although the 1997-2014 Edition of the National Atlas of the United States was retired in September 2014, The National Map recognizes the importance of continuing to make a collection of the small-scale datasets, originally developed for the National Atlas, available to users. Small-scale maps have an advantage over large-scale maps when there is a need to show a large area in a single view. This makes small-scale maps an ideal solution for scientists, decision-makers, and planners needing to provide a geographical context for the research projects. Le Web histoire geographie education civique , nouveaux programmes 2010 bac et DNB - JF Car?mel

Early world maps Antiquity Babylonian Imago Mundi (c. 600 BCE) A Babylonian world map, known as the Imago Mundi, is commonly dated to the 6th century BCE.[1][2] The map as reconstructed by Eckhard Unger shows Babylon on the Euphrates, surrounded by a circular landmass showing Assyria, Urartu (Armenia)[3] and several cities, in turn surrounded by a "bitter river" (Oceanus), with seven islands arranged around it so as to form a seven-pointed star. The accompanying text mentions seven outer regions beyond the encircling ocean.

Maps at About.com The Internet is home to a vast collection of world maps, country maps, state maps, city maps, street maps, road maps, physical maps, political maps, and every type of map possible. This page provides resources for maps along with information to learn how to best use maps and map tools. World Maps Wiki It’s a Google Streetmap of history: How our famous landmarks looked up to 170 years ago By Daily Mail Reporter Updated: 07:19 GMT, 7 November 2011 A website has taken the notion of the 'Now and Then' photo to another level with their 'Google Streetmap of history' which allows people to see what a British street looked like 10, 20 or even 100 years ago. Like a photographic trip down memory lane, the phone app allows users to 'pin' photos to places on the map meaning you can see how the world has changed since the photo was taken, and read the stories behind the area. A vibrant Cambridge Market in the 1900's and today with several marquees in place