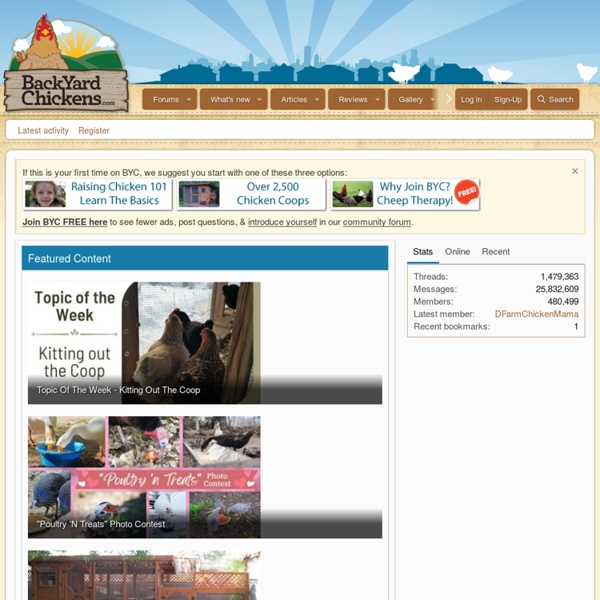 Alternative Heating Sources For Food Dehydration by Gen MacManiman My background as a farm girl and living where stored food was a necessity as well as my wish to find a way to dry my herbs led to both the invention of the Living Foods Dehydrator (the first electric food dehydrator) by my husband Bob, and the writing of "Dry It, You'll Like It" by me. Along the way to inventing an electric dehydrator, we found many non-electric ways to dehydrate food. The basic principle of drying is the movement of warm air around the thing to be dried.

Collecting and Cleaning Chicken Eggs: How to Collect, Clean and Store Eggs Are those pretty layers that you bought in spring starting to lay eggs? Wondering what the best way is to clean them? It isn't quite as straightforward as you think, and different sources give differing opinions on the best way to clean chicken eggs. Gathering the Eggs First things first. Before you worry about cleaning them, you have to gather the eggs. Greek Medicine The ancient Greeks initially regarded illness as a divine punishment and healing as, quite literally, a gift from the gods. However, by the 5th century BCE, there were attempts to identify the material causes for illnesses rather than spiritual ones and this led to a move away from superstition towards scientific enquiry, although, in reality, the two would never be wholly separated. Greek medical practitioners, then, began to take a greater interest in the body itself and to explore the connection between cause and effect, the relation of symptoms to the illness itself and the success or failure of various treatments. The Greek Approach

Chicken Types Raising a flock of backyard chickens as pets with “benefits” is a fun, fulfilling activity that the whole family can get involved in. Kids love to get help collect eggs, refill feeders and waterers, and watch the chickens chase bugs in the yard. If you are considering starting a flock of backyard chickens, choosing a few “kid friendly” chicken breeds will result in a flock of calm, docile hens that your kids can have fun petting, holding and interacting with. Getting your chickens as baby chicks and handling them often (be sure to teach your kids how to safely hold the chicks – always have an adult present to avoid accidents or injuries – and enforce strict rules about washing hands after handling the chicks), bringing them treats, and spending time with them early on will ensure your chickens are used to your children, and vice versa. Since many areas limit flock size to just five hens, here are five of my favorite chicken breeds.

NewsTalk 1290 News & Talk of Texoma The photo above was taken outside our local Academy Sports store just a couple of days ago. This scene is played out at thousands of retailers all across America every day. But why? farm, chickens, eggs, pottery ****Eastern New York Poultry Fanciers Show/ Sale September 26th at Cobleskill ,New York, Fairgrounds ********GREAT SHOW AS USUAL !!!!! MANY BEAUTIFUL BIRDS!! THANKS TO JAMIE MATTS ,FAMILY AND FRIENDS******

Types of Ancient Greek Medicine What do these three have in common? Asclepius Chiron Hippocrates Have you heard of a healing god of Greece called Asclepius or Asculapius? He was Apollo's son, but his divine parentage didn't keep him alive after he became too good at his craft, depriving the Underworld gods of their denizens. Alongside the mythology about demigods bringing the dead back to life and a centaur who taught generations of heroes how to tend to their future, battle or quest-incurred wounds, were Greek thinkers and observers who furthered the craft of healing to what we would probably consider scientific levels.

Chicken Coop Sign I shouldn’t find it funny, really…that one of the most common questions people ask about our chickens is “Do they have names?”. Although having chickens as pets is trendy in some circles, it’s still not the norm…so given that most peoples’ context for chickens is what they’re having for dinner, it’s not that odd of a question. But yes, each of our 7 backyard chickens has a name…and their own distinct personality too. No, we don’t cuddle with them, but we do pet them…and do consider them as part of our extended family….and with their daily gift of eggs, a productive part of our extended family! Although not as common, we’re also often asked if we plan on eating our chickens…the answer to that is, no – just their eggs.