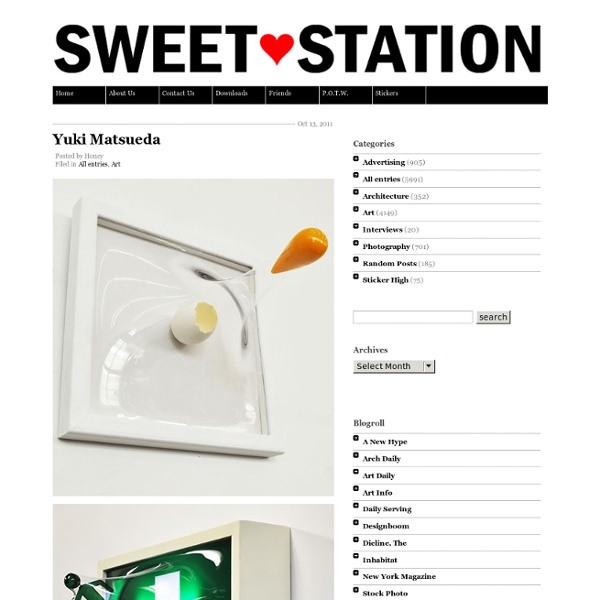 ‘While most designers are busying adding more and more elements into their artworks, Japan-based Yuki Matsueda has, however, managed to let some elements escape from his art pieces. The result seems quite amazing… A vivid 3D image is successfully created and all the elements are believed to be more shocking than those stay still on paper.’

Shocking Black and White Face Illustrations Moscow-based photographer Alexander Khokhlov uses the human face as his canvas for creating graphic, black and white illustrations. From the WiFi icon to the skip of a pulse line across his model's eyes, Khokhlov's vision is extraordinarily unique. Rather than relying on canvas, paper, or any other synthetic material as his foundation, Khokhlov relies on the beauty and lines of the feminine face to form this project, entitled Weird Beauty. The well designed face art, combined with simple and elegant female faces, presents viewers with a complex optical illusion of positive and negative space. Our eye is naturally and initially attracted to the strong black and white graphics painted by artist Valeriya Kutsan.

photography by Angus R Shamal - StumbleUpon A selection of some of the most awesome Behind-the-scenes shots I’ve seen from some famous movies. Back when set designs were huge and hand made, when special effects where mechanical and photographic and film stars were risking their lives on the set. source: Ain’t It Cool News. A self portrait of Stanley Kubrick with his daughter, Jack Nicholson and the crew @ the set of The Shining. on the set of Fritz Lang’s Metropolis — the actress inside the Maria robot taking a breather. Carved Book Landscapes by Guy Laramee (click images for detail) For the better part of three decades multidisciplinary artist Guy Laramee has worked as a stage writer, director, composer, a fabricator of musical instruments, a singer, sculptor, painter and writer. Among his sculptural works are two incredible series of carved book landscapes and structures entitled Biblios and The Great Wall, where the dense pages of old books are excavated to reveal serene mountains, plateaus, and ancient structures. Of these works he says: So I carve landscapes out of books and I paint Romantic landscapes.

Akira Yoshizawa Akira Yoshizawa (吉澤 章 Yoshizawa Akira; 14 March 1911 – 14 March 2005) was a Japanese origamist, considered to be the grandmaster of origami. He is credited with raising origami from a craft to a living art. According to his own estimation made in 1989, he created more than 50,000 models, of which only a few hundred designs were presented as diagrams in his 18 books. Yoshizawa acted as an international cultural ambassador for Japan throughout his career. In 1983, Emperor Hirohito awarded him the Order of the Rising Sun, one of the highest honors bestowed in Japan. Life[edit]

Amazingly Creative Drawing Vs Photography This wonderful work has done by a very talented Belgian painter, illustrator, portraitist, caricaturist and photographer Ben Heine. This creative artist was born in Abidjan, Ivory Coast. He Studied graphic arts and sculpture and I also have a degree in journalism. Lets take a look at some of his awesome works that he calls “Drawing Vs Photography” or “Imagination Vs Reality”. Pencil sketches that seem to stand up off the page [12 pictures] Most of these drawings by Ramon Bruin seem relatively simple, but at the same time, because of their shadows and some intriguingly placed real-life props in the photographs, the sketched images appear to be almost magically leaving the bounds of the paper they’re drawn on… (via My Modern Met)

Meet the 16-year-old fashion designer whose sustainable looks may shake up the industry. Using mosquito netting, branches, ribbon, and flowers, 16-year-old Apichet "Madaew" Atilattana is turning the fashion industry on its head. Madaew looks for materials. Photo by Taylor Weidman/Getty Images. 82 Clever and Creative Fred & Friends Products I'm sure you've come across Fred & Friend products before at your local indie store and might not have even known it. Last weekend I was cruising around town and stopped at an indie store only to find one whole corner of the place dedicated to Fred & Friend products. It was heavenly. I stood there for probably more than a half hour laughing and checking out all their cool stuff. A lot of creativity goes into the making of these products, and I think part of that cleverness is shown in the name of the product and the slogan.