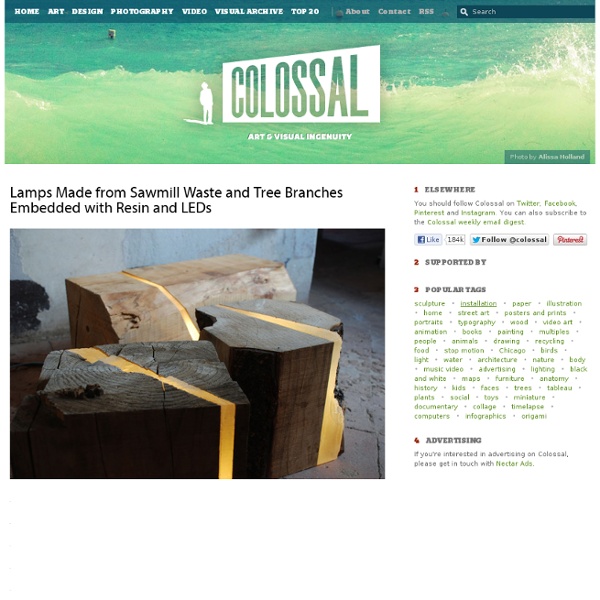 For his Brecce collection, Italian designer Marco Stefanelli devised an ingenious way of removing fragments from sawmill scraps, tree branches, and cement fragments, and replacing them with perfectly sculpted resin embedded with LEDs. The resulting lamps retain the organic nature of their original form yet cast a beautifully subdued light. You can see much more on Stefanelli’s blog. (via the awesomer)

Adorable Reception Desk Suspended by Balloons Posted by C on Tuesday, October 29, 2013 · Irish creative agency Boys and Girls believes that great work comes from daringly simple ideas. True to its word, the team has created a very playful reception desk that would definitely leave you enjoying what you do in your workplace. The other side of the desk rests on outsized Jenga blocks while the other end is suspended by air-tight balloons made of special rubber composite. Artist Beili Liu Embroiders Underneath Hundreds of Suspended Scissors Photo by Rino Pizzi Photo by Blue Photo by Christy Cochran Photo by Art Night Austin Photo by Art Night Austin The Mending Project was a 2011 installation and performance art piece by Austin-based artist Beili Liu.

Tea-time – Tea Steeper Design by Pengtao Yu Timely Steeping I am in love with the Tea-time tea steeper for its intuitive design and simplistic interaction between tea leaves, water and steeping time! A flipping action, akin to starting the timer, sets the tea making process into action. Light Matters: Europe’s Leading Light Festivals In mid autumn, when the nights get longer in the northern hemisphere, we encounter numerous light festivals. And indeed, within the last ten years, more and more light festivals have globally emerged. The reason for the success of light festivals is simple, as the German curator Bettina Pelz concludes: “It’s actually fairly easy, because whenever you do something with light in cities in the night, then people do come. If you do it good, they come twice.” As Pelz points out, light is an apt medium for evening events, since it easily attracts people.

Beili Liu artwork, The Mending Project As each visitor enters the space, one is asked to cut off a piece of the white cloth hung near the entrance, and offer the cut section to the performer. She then continuously sews the cut pieces onto the previous ones. The mended fabric grows in size throughout the duration of the performance, and takes over the vast area of the floor beneath the scissors. Photo by Christy Cochran (left), and Rino Pizzi (right)

Hydrofloors Pools with Movable Floors Hydrofloors are only like the coolest thing ever invented. They are specially designed pools with movable floors. When you’re using your pool it’s just like a normal pool. But when you are done swimming or aquacising, you press a button and the pool’s floor slowly raises up while the water slips underneath the floor. Pimpin! Florian Dussopt Design Studio Watch on Youtube EM (“ElectroMagnetic”) table is an experimental object able to produce a localised electromagnetic field when switched on.This field lights up fluorescent tubes within a short range without any physical contact. The EM table allows the user to interact with an energy that is otherwise invisible. An electronic circuit is embedded in the table and turns a low current into an electromagnetic field, acting directly on the gas within the fluorescent tube.It is advised that electronic devices should be kept away when the table is switched on. This research aims at exploring less known aspect of energies, electromagnetic possibilities and new interactions. Product Development Assistants : Jonathan Joanes Emmanuel Adeusi