Artist Fabricates 50 Functional Instruments from Destroyed Drug War Weapons. As part of his latest project Imagine, Mexico City based artist Pedro Reyes acquired some 6,700 weapons that were scheduled to be buried (as is customary in mass weapon disposals) and instead collaborated with six musicians to create 50 working instruments as part of a statement regarding increased gun violence in Mexico. 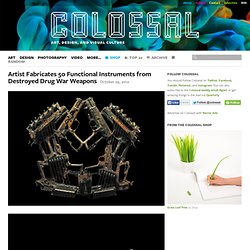 The numerous firearms were cut down, welded and formed into a variety of string, wind, and percussion instruments over a period of two weeks last month. Via his blog Reyes says: It’s difficult to explain but the transformation was more than physical. It’s important to consider that many lives were taken with these weapons; as if a sort of exorcism was taking place the music expelled the demons they held, as well as being a requiem for lives lost. [...]

This is also a call to action, since we cannot stop the violence only at the place where the weapons are being used, but also where they are made. New Carved Book Landscapes by Guy Laramée. Artist Guy Laramee (previously) has recently completed a number of new sculptural works where he transforms thick tomes into incredible topographical features including mountains, caves, volcanoes, and even water. 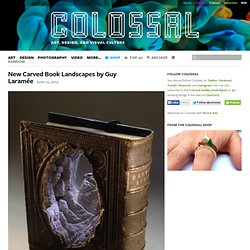 Many of the works are part of a new project titled Guan Yin, a series of work dedicated to the forces that enable individuals to endure grief and pain, or in his words “the mysterious forces thanks to which we can traverse ordeals.” Hung Out to Dry. Here’s a fun installation photographed last year from a 2011 international arts festival in Munster, Germany called Flurstücke 011. 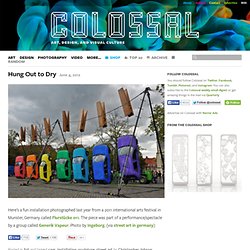 The piece was part of a performance/spectacle by a group called Generik Vapeur. Photo by Ingeborg. (via street art in germany) Paper Mt. Hood. Paper Bird Anatomy. A Sun of Thread: 84 Miles of String Suspended at MIA by HOT TEA. Known mostly in for his graffiti-influenced string tags on the streets of Minneapolis, Eric Rieger aka HOT TEA (previously here and here), recently completed this massive installation at the Minneapolis Institute of Arts. 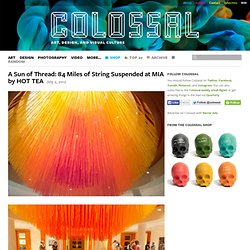 Titled Letting Go, the piece uses 84 miles of colored string that forms the artist’s interpretation of the sun. In a statement about the work Rieger says: At least once in our lives we have all had to let go of something we truly love. Whether it be a pet, personal object or in some cases, loved ones. New Paper Birds and Wildlife by Diana Beltran Herrera. Dirt is Good: 18-ton Sand Sculpture Backdrops by JOOheng Tan. Every once in a while, advertising is amazing. 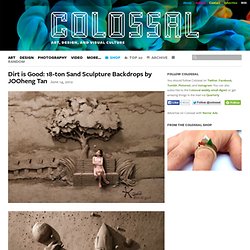 World champion sand sculptor JOOheng Tan was recently asked by ad agency Lowe in Singapore to help create these impressive backdrops for an OMO washing detergent ad campaign. In an age when something like this could have been created digitally, they asked Tan to physically build three 18-ton sand sculptures to be used as backdrops in ads encouraging kids to get dirty. I recommend clicking through to see the pieces above in full size as the details are somewhat lost when scaled down. Also, the video is pretty phenomenal as it shows the creation and behind-the-scenes execution of each photoshoot. Dan Tobin Smith. Beautiful typographic installations from by artist Dan Tobin Smith. 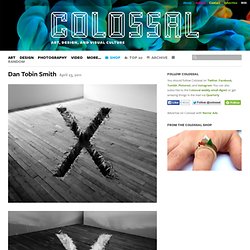 Posting will be light during the holiday, back in full force Monday! (via cartwheel galaxy) Light Sculptures by Makoto Tojiki. The Man with No Shadow, 2009 The Horse with No Shadow, 2010 The Blue Bird 2009 Japanese artist Makoto Tojiki works primarily with light, exploring its use in installations, figurative sculptures, as well as kinetic pieces. 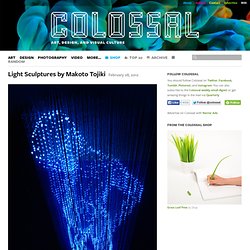 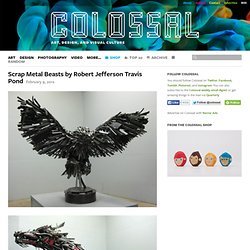 Pond uses all mater of scrap metal from motorcycle parts to old gears, steel handles, and other found hardware to weld these imposing, well-armored birds, fish, and other beasts. Watch the time-lapse above to see how he works. Suspended Together. When I first encountered this installation entitled Suspended Together by Saudi Arabian artist Manal Al Dowayan, I took it simply at face value and assumed I was looking at a collection of 200 fiberglass doves imprinted with what looked like postcards. 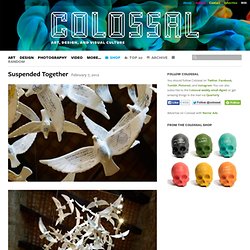 I got it: birds moving from one place to another affixed with notes and postage. It was pretty. Eiji Watanabe frees thousands of field guide butterflies. (click images for detail) In his installation A Butterfly’s Eye View artist Eiji Watanabe eviscerates butterfly field guides, releasing the delicately cut insects and pinning them to the walls around the gutted textbooks. 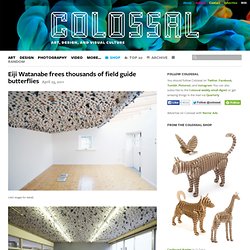 The Silk Vortices of Akiko Ikeuchi. (click images for detail) I am thrilled to share with you the work of Japanese artist Akiko Ikeuchi. Born in Tokyo in 1964, Akiko received a doctorate in painting from the Tokyo National University of Fine Arts and Music. For over two decades she has been hanging her delicately crafted string sculptures in galleries around Japan, Korea, and New York. The installations are constructed from extremely delicate silk threads, and despite the chaotic appearance of the knotted webs Akiko plans each work as an architect would plan a building with precision blueprints that involve a complex internal framework.

“Guerilla” Tree Sculptor in North Yorkshire Identified (is not Banksy) Over the past few weeks in a wooded area around Knaresborough, North Yorkshire, UK—a city known for quirky architecture and annual art festivals—three sculptures were surreptitiously carved into a number of felled trees by an unknown artist. These were not crude, amateur wood carvings, but clearly the work of an accomplished sculptor that the Daily Mail called “an anonymous Banksy-style guerrilla artist”. Right. Well, the sculptures are indeed incredible, and I think the world could use a healthy dose of accomplished mystery art, as was the case last year in Scotland where a series of book sculptures were left by a still unidentified individual in libraries and book festivals around the country. The rogue tree carver’s identity was unveiled when the BBC decided to do the obvious thing and knock on the door of the person who owned the publicly-accessible private property where the sculptures were spotted, David Brown.

Dissolving Figurative Sculptures by Unmask. These figurative human and equine sculptures are by a trio of Beijing-based artists who go by the name Unmask Group. Liu Zhan, Kuang Jun and Tan Tianwei met while at the Central Academy of Fine Arts and have been producing sculptural work together since 2001. These seemingly incomplete stainless steel works show figures in a state of dissolution or perhaps just the opposite, emergence. Regardless, the delicate lines and smooth curves left by the absence of materials make them appear almost sensual. These particular pieces were on display at H.T. Dissolving Figurative Sculptures by Unmask. A New Wooden Automata by Levi van Veluw. I’ve always enjoyed the work of Netherlands-based artist Levi van Veluw, and this wonderful new Automata is no exception. The piece is made almost entirely of wood and is powered by 100 gears embedded in the base.

Expansion by Paige Bradley. Avantgarde. New Mixed Media Assemblages by Kris Kuksi. De-Evolution De-Evolution (detail) Reticent Affiar. Origami Beetle by Shuki Kato. Tom Frantzen. New to me, this great sculpture by Tom Frantzen in Brussels, Belgium. The piece was actually completed in 1985 outside the Communauté Française building and depicts a young man emerging from the sewer to grab the leg of a police officer. (via inspire me now, top photo via anselmo cardoso de sousa sousa) The Balanced Rock Sculptures of Michael Grab Rely Solely on Gravity. The American Dream: A Sand Castle Suburb Consumed by the Ocean. Masterplan is a installation by designer and artist Chad Wright inspired by his own experiences growing up in a sprawling suburb of Southern California. The piece is meant to juxtapose the playful childhood experience of building sand castles on the beach with his brother, versus the grim, modern-day reality of our current real estate collapse.