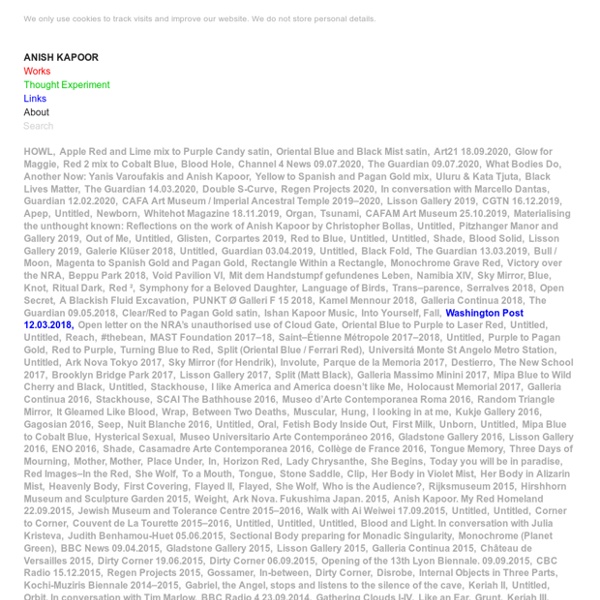 Piero Manzoni Piero Manzoni (July 13, 1933 – February 6, 1963) was an Italian artist best known for his ironic approach to avant-garde art. Often compared to the work of Yves Klein, his own work anticipated, and directly influenced, the work of a generation of younger Italian artists brought together by the critic Germano Celant in the first Arte Povera exhibition held in Genoa, 1967.[1] Manzoni is most famous for a series of artworks that call into question the nature of the art object, directly prefiguring Conceptual Art.[2][3] His work eschews normal artist's materials, instead using everything from rabbit fur to human excrement in order to "tap mythological sources and to realize authentic and universal values".[2] Biography[edit] Manzoni was born in Soncino, province of Cremona. His full name was Count Meroni Manzoni di Chiosca e Poggiolo.[5] Self-taught as an artist, Manzoni first exhibited at the Castello Sforzesco in Soncino in August 1956, at the age of 23.

30 Best Earth Pictures of the Week – April 24th to May 01th 1. The Blue Dragon by Steve Richards 2. Mark Bornowski: Sfumato I have insights, experiences gained over 30 years working as owner of Art School of Oregon, L&B Gallery, in arts communities in USA, Europe and online. The last two years I have been living in Europe- teaching art online, writing art books, painting and drawing. The culmination of my experience make me well versed to work with different people, overcoming challenges to increase the business of art education through marketing and development. Art work/education/ marketing/presentation/organization/ business-organization and administrative managing, coordination with successful relationships, promotion campaigns and branding I am passionate about turning art concepts into reality and the uninspired into the immersed supporter.

La Luna Electrica justement: UranusRelated just got back from Montreal and my car has the diameter of Uranus kilometres on it (top that for nedleyness) (via cinoh-deactivated20120915) (Source : b-asik, via kikisloane) Ni Tanjung Ni Tanjung untitled, between 2009 and 2012 color pencil on sheets of paper mounted on bamboo sticks 130 x 70 x 5 cm Gift from Georges and Lise Breguet Photo : Marie Humair, Atelier de numérisation - Ville de Lausanne Collection de l’Art Brut, Lausanne Author Ni Tanjung (1930), Indonesia Biography At nearly 80, and in the solitude of her windowless room, Ni Tanjung draws thousands of multicolored faces.

Search Results …urtesy Klein Sun Gallery Courtesy Klein Sun Gallery Currently on view at Klein Sun Gallery in New York, artist Li Hongbo (previously) has an exhibition of new and old work titled Tools of Study. Hongbo is known for his unconventional figurative sculptures made from thousands of sheets of flexible paper that twist and elongate in almost any direction, many of which take several months to complete. Via Klein Sun: Li Hongbo’s stunning, stret… Read more... What at first look like delicate works of carved porcelain are actually thousands of layers of soft white paper, carved into busts, skulls, and human forms by Beijing artist Li Hongbo. - StumbleUpon My Modern Metropolis Interactive Street Art Pops Up in Malaysia As part of the George Town festival, a month-long celebration of art going on in Penang, Malaysia, Lithuanian artist Ernest Zacharevic is beautifying the city streets with his imaginative street art. Dubbed a "new Banksy" by The Wall Street Journal, 25-year-old Zacharevic is making a name for himself with these fun works.

Trip Out on Art with Estela Cuadro’s Hallucinogenic Paintings « Art Installations « Mayhem & Muse Estela Cuadro’s personal art style is unique. She incorporates elements of spirituality, tribalism and psychedelia into each of her paintings to create scenes that are abstract yet contain hints of reality. Each painting is filled with a sense of movement and animation. It’s as though the artist was in the midst of a wild imagining, decided to pause the movie going on in her head and bring that imagery into the physical world through her artistic skills. Cuadro’s use of color is intriguing. She offsets bright colors against more modest hues so that the viewer’s eye is drawn to one or more focal points within the painting.

Arne Quinze ONE WORLD by The People of Tomorrow Arne Quinze, Tomorrowland & De Schorre are building a state-of-the-art, permanent public artwork and invite the whole world to help. Follow the making of here! www.peopleoftomorrow.com My Secret Garden / Rockstrangers Book Arne Quinze invited author Saskia de Coster for a unique project that will enlargen the scope of both the Rock Strangers project (Ostend) and the Secret Garden exhibition (Rotterdam). Outsider Art Now » MEHRDAD RASHIDI Untitled, u.d. © Henri Boxer Gallery Mehrdad Rashidi was born in the town of Sari in Northern Iran in 1963. At the age of 20 he fled Iran because of his strongly held political views and settled in Germany. In 2006, for no particular reason, he began to draw. He found it relaxed him and made him feel happy, he also thought of his homeland, his childhood and easier times in his life whilst he doodled on any piece of paper that came to hand. Using old notebooks, envelopes, shopping receipts and discarded advertising pamphlets, he gradually, in what seems to be an obsessive and compulsive surge of creativity, began to produce an extraordinary, and hauntingly beautiful body of work.

Tom Stogdon Sculpture Tom was born into a fourth generation of greengrocers in Bloomsbury, London and worked in the fruit trade until 1998. His first ventures into sculpture began by making elaborate pieces using fruit and vegetables, and then gradually progressed into using slate and metal. His experiments with stone and the wearing influence of water have very much dictated the direction of his work in the last few years. Repetition and movement are recurring themes but always with a strong sense of calm. The pieces vary in size and stature, but each is made up of many smaller component parts, which are in turn wrestled into a larger space.

Most popular photography on StumbleUpon! 2011 is over, In this article, I am showcasing the most beautiful photographs that were stumbled on StumbleUpon. Let us take a look at this truly jaw-dropping collection and enjoy! Source: StumbleUpon *None of the images on this page are mine,they were found on StumbleUpon, meant to inspire.Any problems, just email. Marina Abramović - 2013 AP MHS Research Papers To the unknowing and/or unsuspecting viewer, the works of performance artist Marina Abramović can be both utterly shocking and totally captivating, often at the same time. While her work ranges in extremity, common threads throughout all of her pieces include physical intensity, emotional revealment, and a lingering sense of melancholy and sadness; whether she is violently throwing herself against a wall or simply sitting motionless in a wooden chair, her and her work have been known to evoke fierce emotions and even tears in an assortment of audiences. Abramović’s work is that of self-abuse and self-discipline, excessive punishment and great endurance. Known for the often unbelievable and ridiculous lengths some of her pieces have reached, Abramović in her performances erases the past and eradicates the future, and she champions the present and the “now” as time slows down for her and her audience. flowers, and wire” with which they were instructed to use any way they wished (Scott).