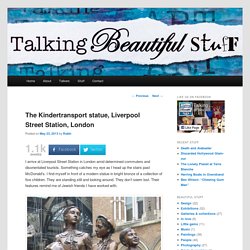 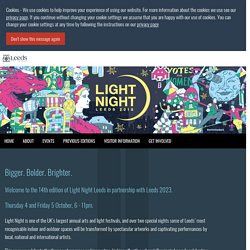 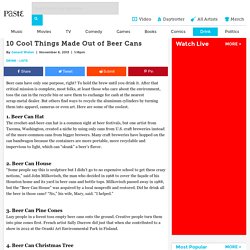 To hold the brew until you drink it. After that critical mission is complete, most folks, at least those who care about the environment, toss the can in the recycle bin or save them to exchange for cash at the nearest scrap-metal dealer. But others find ways to recycle the aluminum cylinders by turning them into apparel, cameras or even art. The Hill. Nestled in the plains of West Texas, the renowned American Artist, James Magee, has been working on a large-scale art installation known simply as The Hill. 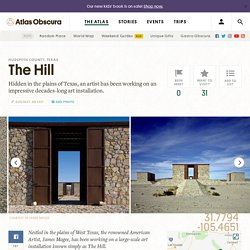 Found on 2,000 acres of desert in Cornudas—roughly 70 miles outside of El Paso—stands four identically constructed buildings connected by causeways. Each building is an estimated 40 feet long, 20 feet wide, and 17 feet high and made entirely of irregularly cut shale rock. These sister buildings collectively form The Hill, and is a testament to the ingenious engineering and artistic skill of James Magee.

Each of the buildings that make up The Hill feature an iron portal that marks the entrance to each structure. BBC Four - Handmade in the Pacific, Series 1, Pou. Tusk Rhino Trail 2018 – All the latest about the Tusk Rhino Trail 2018. Head Above Water Sculpture installed on the Thames to Provoke Conversation about Mental Health - Inspiring City. A giant 9 metre high wooden head has been installed on a pier looking out from the South Bank and into the Thames. 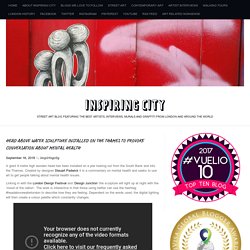 Created by designer Steuart Padwick it is a commentary on mental health and seeks to use art to get people talking about mental health issues. Linking in with the London Design Festival and ‘Design Junction‘ the sculpture will light up at night with the ‘mood of the nation’. The work is interactive in that those using twitter can use the hashtag #headabovewaterlondon to describe how they are feeling. Dependent on the words used, the digital lighting will then create a colour palette which constantly changes. The head itself has been designed to be gender, ethnicity and age neutral. Es Devlin: Please Feed the Lions. Burning Man 2018 architecture can be pretty spectacular. After complex planning and frantic construction, Black Rock City is now fully armed and operational in the Nevada Desert–and even if you think the annual event is a wretched hive, the structures and installations that accompany the festival are actually worth checking out. 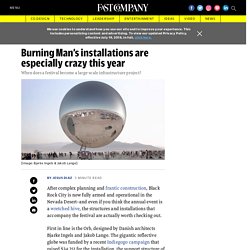 First in line is the Orb, designed by Danish architects Bjarke Ingels and Jakob Lange. The gigantic reflective globe was funded by a recent Indiegogo campaign that raised $34,251 for the installation, the support structure of which required 30 tons of steel, welded over 1,000 hours, along with 1,500 hours of sewing of metallic fabric to create its 21,500-square-foot surface. The fan-powered sphere itself is a massive 83 feet and 8 inches in diameter–1/500,000th of the earth’s surface–and is meant to “blend entirely into its surroundings and become part of the desert,” the duo explain. “The ORB is a tribute to Mother Earth and human expression.” The idea? The world's most creative public statues and sculptures. Conceptual Sculptures by Dario Escobar Reflect the Product Displays of Popular Sporting Goods. West African Wood Carvings. Three-Dimensional Hoop Embroidery Accented With Clay by Justyna Wołodkiewicz. Artisan brunch. Sew Your Soul: Lucy Sparrow’s Felt-Art Installations.

As a part of Our Liverpool Landscape: From Turner to Today, bird sheet music will curiously captures avian activity: cawing cacophonies, dulcet timbre, and productive pooh will be collected and collated into a sounding celebration of our feathered friends! 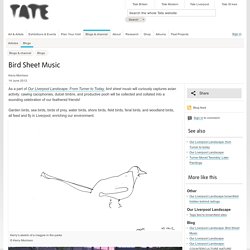 Garden birds, sea birds, birds of prey, water birds, shore birds, field birds, feral birds, and woodland birds, all feed and fly in Liverpool; enriching our environment. Bird Sheet Music will seek to harnesses some of their fundamental doings. Bird Sheet Music, a collaborative composition, takes - by chance – nature’s calls and represents what comes naturally.I will be laying blank score - on a scale of great magnitude - underneath places where birds roost and feed. As the birds go about their daily business, droppings will fall onto the score below. Each splat on the score will form a musical note, a cache of pooh, an embellished score: bird shit music. 23 Cool Sculptures You Won't Believe Actually Exist. 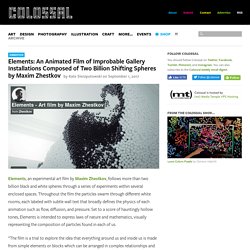 Throughout the film the particles swarm through different white rooms, each labeled with subtle wall text that broadly defines the physics of each animation such as flow, diffusion, and pressure. Set to a score of hauntingly hollow tones, Elements is intended to express laws of nature and mathematics, visually representing the composition of particles found in each of us. “The film is a trial to explore the idea that everything around us and inside us is made from simple elements or blocks which can be arranged in complex relationships and become compound structures,” says Zhestkov. “We could project this idea into emotions, behaviors, thought processes, relationships, life, planets and the universe.” A Replica of the Parthenon in Germany Constructed from 100,000 Banned Books. The Parthenon of Books, 2017. 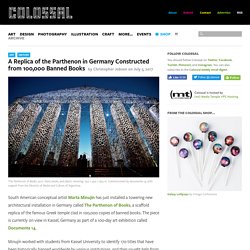 Steel, books, and plastic sheeting. 19.5 × 29.5 × 65.5 m. Commissioned by documenta 14, with support from the Ministry of Media and Culture of Argentina. South American conceptual artist Marta Minujín has just installed a towering new architectural installation in Germany called The Parthenon of Books, a scaffold replica of the famous Greek temple clad in 100,000 copies of banned books. The piece is currently on view in Kassel, Germany as part of a 100-day art exhibition called Documenta 14. Artist Ronit Baranga’s Disturbing Anatomical Dishware Creeps Across Tabletops. Artist Ronit Baranga (previously) creates ceramic sculptural works she describes as existing on the “border between living and still life”—objects guaranteed to either tickle your funny bone or haunt your worst nightmares, depending on your perspective. 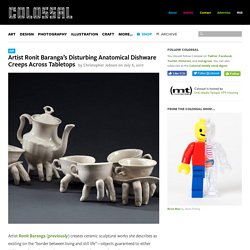 2017 Crop Circles - Temporary Temples. The 2017 crop circle season has begun. Check back regularly for updates! In order to present our images in a organised and detailed way we have created a page for each of the circles we have photographed. On this page (below) you will find a single image of each formation we have recorded this year in date order (with the latest image at the top) and by clicking on any of the images below you will be taken to a detailed page where you will find multiple images of that circle, with location, date, crop, geometry gallery, written information and links etc. Our website is completely free to view including all our image archives – we hope you enjoy it! Justyna Wołodkiewicz (@nibyniebo_) Sew Your Soul - Home - Welcome! - Felt Art by Lucy Sparrow. A Human-Shaped Pool Reflects the Sky Over Tbilisi by Icy & Sot. Uk.pinterest. Casey Curran. Emmanuelle moureaux architecture + design — all.

2011- ongoing (in construction)Taipei (Taiwan) concept : shine In 2018, the Mass Rapid Transit "Circular Line" will open in New Taipei City. Drawing a large circle, Circular Line will connect the existing lines that spread in radial direction from the City Central. Circular Line is a groundbreaking scheme that will dramatically improve the transport system, where the Taipei City Department of Rapid Transit Systems (DORTS) is responsible for the project and its construction. They plan to have the transportation facility, the Circular Line, as a work of public art piece, for the very first time in the world.

Circular Line is a subway system, total length of 34.8 kilometers, in which its 14.5 kilometers are above ground facilities. 一二三木頭人. 秋天の潮 155*98*50cm 2013 胡桃木. 岳 (@gakugakugakugakugaku1) Drinking Tea (2010) Moisés Hernández Design Studio. 2017 / Ash and watercolor / Project assistant: Harmonie Begon One of the main characteristics of birds are the incredibly saturated colours of their feathers. Toucan, hummingbird and Mexican quetzal were chosen because of their glowing chromatic range. In an attempt of generating a balanced dialogue between machine made and handmade objects, we made soft and continuous shapes milled with CNC technology contrasted with handmade painting done by immersion in coloured water, an experimental technique we developed for this project, which gives the birds a unique personality.

This technique of painting allows to achieve an interesting texture of intersections and transparency made by layers of colour that resembles the plumage of birds. The amount of colour, hue and the way sections cross one another depends on the time and position the wood is plunged. Tetrapod (structure) - Wikipedia. Artist Walead Beshty Shipped Glass Boxes Inside FedEx Boxes to Produce Shattered Sculptures. FedEx® Large Box ©2005 FEDEX 139751 REV 10/05 SSCC, Priority Overnight, Los Angeles-New York trk#795506878000, November 27-28, 2007 In this intriguing sculptural series spanning 2005 to 2014, LA-based artist Walead Beshty packaged his artworks in FedEx boxes and shipped them across the country to exhibitions and galleries. But unlike most artists who utilize every bit of care to protect and pad their artwork from the inevitable rough handling of mail carriers, Beshty designed his pieces to break. Nathan Sawaya — The Art of the Brick.