Nathan Sawaya — The Art of the Brick 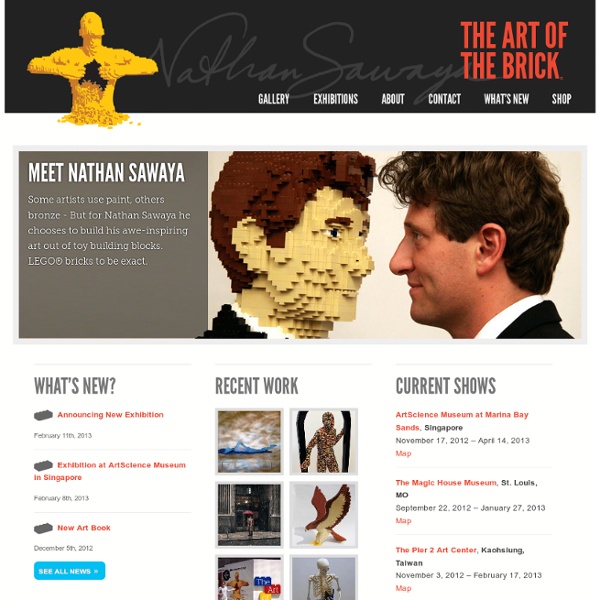 antony gormley: another place. – shape+colour There’s an intrinsic, undeniable draw towards the sea. Maybe it’s the same lunar gravity that moves the tides, maybe it’s because we were all fish a billion years ago, or maybe it’s the lure of knowing that no matter what machines we strap to our backs or submerge ourselves in, it’s simply not a place where our fragile bodies will let us go for very long. Or maybe, since we’re mostly made of water ourselves, it’s just the natural, molecular pull of little atoms reaching out to find each other again. A genetic memory too quiet for our brains to understand. What if our very bodies miss the sea? Our skins on the shore, our bones in the beach, our body pulls to return into the same water that it was born from. In British artist and sculptor Antony Gormley’s “Another Place”, he perfectly captures the universal longing human beings feel for the ocean. When the tides are fully out, each of the 100 men are completely exposed.

Tom Eckert My sculptures are formed entirely of wood and then painted. I use traditional processes to carve, construct, laminate and paint my pieces. The woods I prefer working with are basswood, linden and limewood (all very similar) chosen because they carve and paint well and are very stable. Coming from a painting and drawing background, I am still interested in applying some of those techniques to my sculptures. Forms carved to suggest cloth recur in many of my pieces. Since childhood, I have been curious about and amused by mistaken impressions of reality presented as part of my visual experiences.

Aeolus - Acoustic Wind Pavilion | Aeolus by Luke Jerram Aeolus - ruler of the four winds in Greek mythology. Aeolus is a giant stringed musical instrument, an acoustic and optical pavilion designed to make audible the silent shifting patterns of the wind and to visually amplify the ever changing sky. The sculpture a giant aeolian harp, designed to resonate and sing with the wind without any electrical power or amplification. Vibrations in strings attached to some of the tubes are transferred through skins covering the tops, and projected down through the tubes towards the viewer standing beneath the arch. Aeolus sonifies the three dimensional landscape of wind, using a web of aeolian harp strings. Almost like cats' whiskers sensitive to the slightest touch, the stings register the shifting landscape of wind around the artwork to be heard by visitors. For those tubes without strings attached, the tubes are tuned to an aeolian scale and hum at a series of low frequencies even when its not windy. Optical Pavilion New Films! Designed to Inspire

Variations on normal by Dominic Wilcox | Ideas, observations and inventions 2: Reverse Listening Device Here’s my second object for my Selfridges window at the Festival of Imagination. I thought to myself ‘what would it sound like if I could hear the things that happened on my left side through my right ear?’ Above photograph of me taken by Pec studio. For larger images visit my portfolio website hereReverse Listening Device was designed and made by me, Dominic Wilcox for my Selfridges window during the Festival of Imagination starting Jan 7, 2014 onwards. Check back on my blog lots more of the things I made over the next few days. 1: Tea cup with cooling fan January 16, 2014, 12:12 pm Filed under: design I do like a nice cup of tea, but sometimes I’m too eager to drink it and burn my tongue. I added an on/off switch onto the saucer. I quite enjoy the idea of taking something traditional, from a bygone age and combining it with modern technology. Before hanging I sat the cup on a tray. The original sketch. For larger images visit my portfolio website here. Sound Bulbs

A DIY Fruit Bowl Made From Melted Plastic Army Men Did you ever play with toy soldiers when you were little? Well, now you can put them to a less violent use, with Mike Pinder’s DIY Plastic Army Men Fruit Bowl. Going under the name N36 on Instructables, this guy took some cheap army men, put them in a metal dish, and melted them together to produce a cool fruit bowl. The process isn’t that hard or long, and the result looks extremely cool. While the project might look like a smart way to sneak some of your favored troopers into the house, Mr. Yes, the cheap plastic army men are a matter of some controversy. Plus, as an adult, you probably don’t have that many opportunities to keep army men on your dinner table. More info: instructables (h/t: boredpanda) Read more What you need: two bags of plastic army men, a metal mixing bowl and a heat gun! Hot melting plastic is toxic, so make sure to do it outside in a well ventilated area! Look for weak points, like legs, arms and guns. Enjoy with some fruit!

Cornelia Parker and the Untimeliness of Waste – Waste Effects A version of this text was presented at “L’art Intempestif/Untimely Art”, held at the Institut du monde anglophone, Université de Paris III-Sorbonne Nouvelle, 9–10 September 2010. It has become, in recent years, quite common to equate concepts of waste with ideas of dirt, disgust or contagion. Following the work of Mary Douglas (1966), studies across the humanities and social sciences have taken for granted that ‘filth’ and ‘abjection’ provide a necessary condition for waste. There are a number of reasons why I have chosen the work of the British artist Cornelia Parker to discuss the relationship between art, waste and temporality. One of the temporal effects most commonly associated with Parker’s work is the relationship between object and action. Cornelia Parker, Cold Dark Matter: An Exploded View (1991) We begin with an explosion; a common garden shed exploded into hundreds of shards, fragments, particles. “I like the idea of the material already being loaded, or clichéd. Works Cited.

Forms Crafted from Wood – Hand Carved Wooden Sculptures by Alison Crowther Fantastic sculptures by Alison Crowther, a British artist who resides near the Downs, south of England. She uses unseasoned English oak and other indigenous hardwoods found in the region to produce them. In the early stages of the making process she works with a chainsaw, later using a chisel, as seen in the photos below, to carve textures and patterns on to the surface of the sculptures. Her work ranges from bowls, to small objects, large benches and other pieces of furniture. It’s also nice to see the picture of someone holding the small sphere which has been crafted in a similar way. alisoncrowther.com Artist Walead Beshty Shipped Glass Boxes Inside FedEx Boxes to Produce Shattered Sculptures FedEx® Large Box ©2005 FEDEX 139751 REV 10/05 SSCC, Priority Overnight, Los Angeles-New York trk#795506878000, November 27-28, 2007 In this intriguing sculptural series spanning 2005 to 2014, LA-based artist Walead Beshty packaged his artworks in FedEx boxes and shipped them across the country to exhibitions and galleries. But unlike most artists who utilize every bit of care to protect and pad their artwork from the inevitable rough handling of mail carriers, Beshty designed his pieces to break. Not only was Beshty fascinated by obtaining a “fingerprint” of sorts that documented the journey of each package to its destination, but he also found it curious that a corporation has the ability to copyright the exact dimensions of a box, essentially owning an empty shape. The FedEx works […] initially interested me because they’re defined by a corporate entity in legal terms. Here’s a brief video of Beshty explaining the project during the 2008 Whitney Biennial. Fedex, 2005.

Tetrapod (structure) - Wikipedia This article is about the structure. For four-limbed vertebrates, see Tetrapod. Numbered tetrapods protect an earlier sea wall in Ventnor, UK. Tetrapods along the waterfront at Mumbai Tetrapods protect the breakwater leading to the Walton Lighthouse at the entrance to the Santa Cruz Harbor in California, USA. The unit was originally developed in 1950 by Laboratoire Dauphinois d'Hydraulique (now ARTELIA) in Grenoble, France. Tetrapods and concrete have become a Japanese institution in modern times. Jump up ^ Spătaru, A (1990).

Moisés Hernández Design Studio 2017 / Ash and watercolor / Project assistant: Harmonie Begon One of the main characteristics of birds are the incredibly saturated colours of their feathers. Toucan, hummingbird and Mexican quetzal were chosen because of their glowing chromatic range. In an attempt of generating a balanced dialogue between machine made and handmade objects, we made soft and continuous shapes milled with CNC technology contrasted with handmade painting done by immersion in coloured water, an experimental technique we developed for this project, which gives the birds a unique personality. This technique of painting allows to achieve an interesting texture of intersections and transparency made by layers of colour that resembles the plumage of birds. This way, the birds acquire a duality, where handmade and machine made complement each resulting in three decorative figures.

2017 Crop Circles - Temporary Temples The 2017 crop circle season has begun. Check back regularly for updates! In order to present our images in a organised and detailed way we have created a page for each of the circles we have photographed. On this page (below) you will find a single image of each formation we have recorded this year in date order (with the latest image at the top) and by clicking on any of the images below you will be taken to a detailed page where you will find multiple images of that circle, with location, date, crop, geometry gallery, written information and links etc. Our website is completely free to view including all our image archives – we hope you enjoy it! Please Help to keep us Flying in 2017: If you have enjoyed looking at our pictures and information please consider making a small donation to keep us flying.