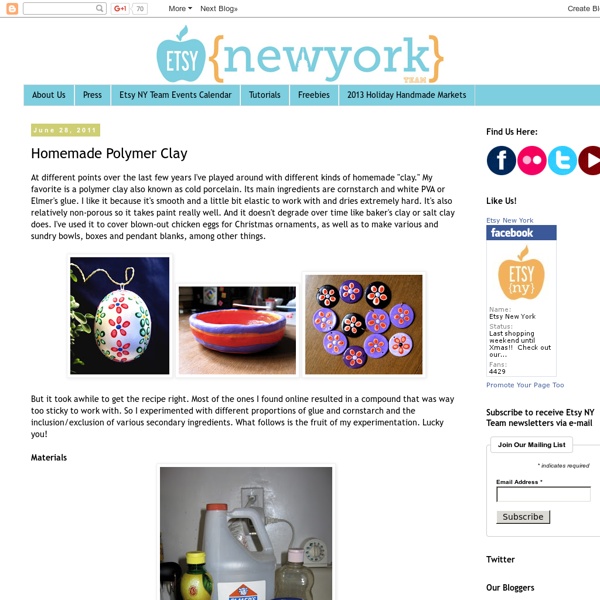 At different points over the last few years I've played around with different kinds of homemade "clay." My favorite is a polymer clay also known as cold porcelain. Its main ingredients are cornstarch and white PVA or Elmer's glue. I like it because it's smooth and a little bit elastic to work with and dries extremely hard. It's also relatively non-porous so it takes paint really well. And it doesn't degrade over time like baker's clay or salt clay does. But it took awhile to get the recipe right. Materials 3/4 cup white glue1 cup cornstarch2 tablespoons mineral oil (I used baby oil but reportedly even vaseline will work)1 tablespoon lemon juiceNon-stick potWooden spoon Steps Add cornstarch to glue in a nonstick pot. Cook over low flame stirring pretty much constantly (you can take a quick break or two if your arm gets tired, which it will) until the mixture resembles mashed potatoes. Remove from heat! Let dry about 2-3 days, then paint, or not. Until next time -- Enjoy! Linda

Tinted Mason Jars in Rainbow I love using mason jars for decorating and a seemingly endless supply of craft projects. But rainbow tinted mason jars, just like the vintage ones you can never find anymore? This one might be my favorite project with mason jars yet! Mason Jars Mod Podge in Gloss (buy it here) Food coloring Ramekins to mix colors Newspaper or paper bag Mix food coloring with a T or so of water into individual ramekins. Easiest Design Transfer Method You'll Ever Find - Makely School for Girls In the middle of a new project that I was working on, I realized that I had a problem. I needed to transfer a very large design (think 4 feet by 4 feet!) than I want to paint onto a primed piece of wood, and I couldn’t figure out how to do it. I laid the printed design out on the wood and thought I could just trace the design on the paper with firm pressure and a little impression line would be left on the wood that I could just go back and trace.

Game Changer Chicago Development Blog Ashlyn Sparrow, Game Designer at Game Changer Chicago’s Design Lab, describes her time at Mozfest in London Tell us about Mozfest, the Hive Network, and how you became involved with both. The Hive Network is a locally driven network of organizations dedicated to teaching youth. There are currently Hives in Chicago, Pittsburgh, New York City and Toronto with upcoming Hives in Indonesia and San Francisco. The Mozilla Foundation runs the Hive Networks in Chicago, Pittsburgh and NYC, creating technologies that empower people to take learning into their own hands. MozFest (Mozilla Festival) is an annual conference/Maker Party that is organized by the Mozilla Foundation.

Making a Stencil UPDATE: If you are here at All Things Thrifty for the first time, WELCOME!! Since I wrote this post about making a stencil I have found that making stencils are MUCH easier with my Silhouette Machine. So, if you would like to see an easy way to make a stencil with a Silhouette check out that post! karen’s coffee can lanterns the nights are warming up here in northern ca, so i’m eager to tackle this lantern diy project from karen at maggiemakes. named after her adorable black lab, karen’s blog primarily focuses on crafts for around the home and provides great instructions and photos. i can’t wait to grab a hammer and a can and give it a go. thanks karen! -kate CLICK HERE for the full how-to after the jump! summer may have skipped my part of the globe this year but that hasn’t stopped me from dreaming of those long warm summer nights outside relaxing with friends. when summer decides to come our way i will be ready to enjoy those nights with these rustic coffee can lanterns. inexpensive, fun, simple to make and customize, they add the perfect decoration for a late night BBQ with a group of friends or a night of gin and tonics with the one you love. try our three designs or create your own, with a variety of tools the possibilities are endless. -karen

Alternate reality game - Wikipedia An alternate reality game (ARG) is an interactive networked narrative that uses the real world as a platform and employs transmedia storytelling to deliver a story that may be altered by players' ideas or actions. The form is defined by intense player involvement with a story that takes place in real time and evolves according to players' responses. Subsequently, it is shaped by characters that are actively controlled by the game's designers, as opposed to being controlled by artificial intelligence as in a computer or console video game. Players interact directly with characters in the game, solve plot-based challenges and puzzles, and collaborate as a community to analyze the story and coordinate real-life and online activities. ARGs generally use multimedia, such as telephones, email and mail but rely on the Internet as the central binding medium.

Forum > Lego Mario designed using modo I recently built this Lego model of Mario using a NextEngine 3D scanner, modo and big pile of Lego. Hope you like it!Cheers,Keith Explore more. Web pages, photos, and videos Have you ever done any glass etching? Well, neither had I before today. But wow. Such an easy, yet sweet little touch that you can add to any glass. Check out my new and improved etched Trifle Bowl. The perfect bowl for desserts of all kinds…..and even a great place for fresh fruit on the counter.

The Year in ARGs - Wired Magazine This article reflects on the alternate reality games of 2010, commenting on everything from buried muppet pirate treasure to a national manhunt facilitated by Wired. Read on to learn about the revamped ending to Portal, J.J. Abrams’ attempt to replicate the buzz surrounding Cloverfield, F1 driver Lewis Hamilton’s surprising hobby, and more. By Michael Andersen, originally posted at ARGNet Image taken at San Francisco's Jejune Institute At the end of every year, I like to set aside some time to take stock of the alternate reality gaming space.